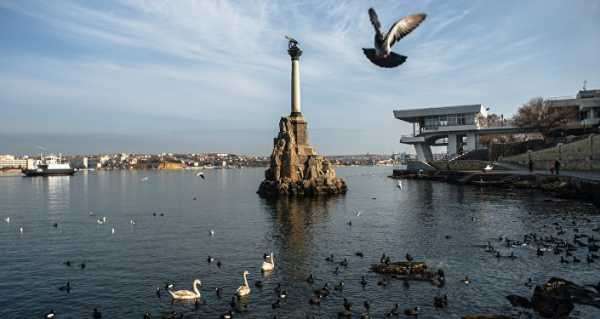 On Monday, NBC News reported, citing an anonymous intelligence source, that the CIA assumed the information about alleged ‘Russian bounties’ for US troops’ heads in Afghanistan was a tit-for-tat response to the US arming of Ukrainian units “fighting Russian forces in Crimea.”

The Russian Embassy in Washington has asked the US government to clarify NBC News’ reporting on the US’s alleged support for Ukrainian forces trying to carry out terrorist attacks in Crimea.

“The statements provided in the NBC News report about the US involvement in “Ukrainian units fighting Russian forces in Crimea” were noticed with grave concern,” the Embassy said on its official Twitter and Facebook accounts.

“In other words, unnamed US officials speak about their country’s support of terrorist activities in third countries. In this case, they talk specifically about Russia,” the Embassy added.

The Embassy accompanied the posts with images of US military advisors taking part in training with Ukrainian far right ‘volunteer battalions’, as well as pictures provided by Russian investigators in recent years of attempts to smuggle explosives, grenades and other weapons into Crimea for the express purpose of staging terrorist attacks on the peninsula.

In its piece Monday, devoted to whether or not US officials still believe that Russian military intelligence offered payments to Taliban fighters in Afghanistan to attack US and coalition troops, NBC News cited an unnamed intelligence source who mentioned an analysis by CIA officers and analysts who “came to believe a bounty programme existed” and that “the Russians viewed it as a proportional response to the US arming of Ukrainian units fighting in Crimea.”

The New York Times broke the ‘Taliban bounties’ story in June, but has since been forced to walk back its claims, saying it did not have firm evidence of the existence of any bounties. Moscow, Washington, and the Taliban itself have vocally dismissed the bouny claims, with latter calling them a disinformation campaign by the Kabul government aimed at derailing the Afghan peace initiative.

The United States has delivered hundreds of millions of dollars of military aid to Ukraine in recent years, but has never mentioned funding for any “units fighting in Crimea.”

Aksyonov added however that it’s no secret that the United States supports Kiev in its attempts to engage in destructive activities in relation to Crimea. “This includes attempts at espionage and the committing of terrorist acts on our territory. I want to emphasize once again: our security agencies have a very powerful military and counter-terrorism potential, which allows us to neutralize any threats and fully ensure the security of Crimeans,” he warned.

Crimea became part of Russia again in 2014 in the aftermath of a US and EU-led coup d’état in Kiev which overthrew Ukraine’s democratically elected president. Amid the turmoil, authorities on the peninsula organized a snap referendum in which the vast majority of residents expressed their support for breaking off from Ukraine and rejoining Russia, almost 60 years after it was first transferred to the Ukrainian Soviet Socialist Republic from the Russian Soviet Federative Socialist Republic within the USSR by Nikita Khrushchev in 1954. Crimea became part of Russia in 1783 following a war between the Russian and Ottoman Empires.