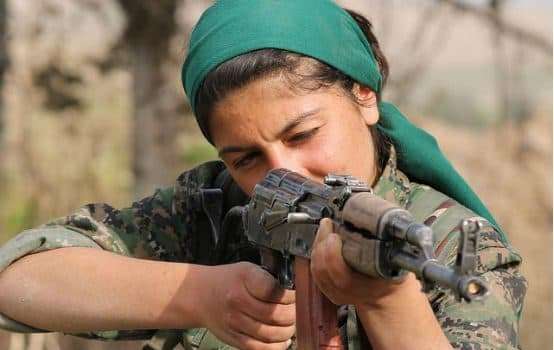 Tensions have existed for years between Washington and Ankara over the Kurdish population in both Iraq and Syria. U.S. officials regard the Kurds as able fighters and democratic secular allies in the struggle against Islamic extremism. Turkish leaders view them and their agenda for an independent Kurdish homeland as a menace to Turkey’s sovereignty and territorial integrity—especially since a majority of Kurds reside in southeastern Turkey. Turkish President Recep Tayyip Erdogan’s government deems the highly autonomous Kurdish entities across the border in Iraq and Syria as dangerous models and a magnet for their secessionist-minded ethnic brethren inside Turkey. U.S.-Turkish policy disagreements regarding the Kurds have gained new intensity in recent months and could become a catalyst for an irreparable breach in ties between the two NATO members.

Ankara has long fumed that fighters from Turkey’s secessionist Kurdistan Workers Party (PKK) have used Iraq’s self-governed Kurdish region as a safe haven for raids into Turkey. On several occasions, Turkish military units have retaliated with airstrikes and even ground force incursions into Iraq to neutralize the PKK threat. Turkey also reacted with extreme hostility earlier this year when the Kurdish Regional Government in Iraq held a referendum to declare that region’s independence.

Erdogan and other officials repeatedly emphasize that Turkey will never permit Syrian Kurds to achieve the type of autonomous status that Iraqi Kurds have enjoyed since the overthrow of Saddam Hussein. Continued Syrian Kurdish movements toward such a goal would defy the reddest of red lines that Ankara has drawn.

Syrian Kurdish leaders clearly have not been intimidated by Ankara’s warnings. Two Kurdish factions operate in Syria. One is the rather radical-left Democratic Union Party (PYD), which controls most of the Kurdish militia fighters, the Popular Protection Units (YPG). The PYD competes for influence with the somewhat more moderate Kurdish Democratic Party (KDP), a group that has ties to a similar party in Iraqi Kurdistan. Despite some ideological differences, Kurdish fighters in Syria have displayed an impressive record of success. Already by the summer of 2013, YPG forces had scored decisive victories over both the Nusra Front, al-Qaeda’s Syrian affiliate, and the then-embryonic ISIS, proceeding to liberate most majority-Kurdish cities in the north.

By mid-2017, the accumulating victories by YPG militias and other forces had expanded the amount of land under Kurdish control. Today, their holdings constitute a nearly continuous swath of territory along the Syrian-Turkish border. That “enclave” amounts to nearly 25 percent of Syria. The Kurds have become more politically aggressive as well. In March 2016, they organized a conference in the city of Rmelan, along with officials from Christian and other minority communities, to declare the establishment of the Democratic Federation of Rojava, an ostentatiously self-governing region. In September 2017, the authorities conducted local elections, the first stage in a three-part process to establish an official, autonomous, regional government.

Ankara is increasingly angry at Washington’s cozy military and political ties to the Syrian Kurds. There are understandable reasons for Ankara’s discontent. The United States has sent extensive arms to Kurdish forces battling the Islamic State, and there have been few indications that the flow will cease even though ISIS was on the verge of collapse by late 2017. The Erdogan government finally extracted a promise from President Trump in November to terminate weapons shipments, but Washington subsequently sent decidedly inconsistent signals. Despite Trump’s promise regarding arms transfers, the administration essentially deputized the Syrian Kurds to suppress remaining pockets of Islamic extremism in northern Syria and to guard the border with Turkey, infuriating Ankara.

Turkey’s anger has now exploded into airstrikes and massive artillery barrages on two Kurdish-controlled districts in northern Syria. In contrast to previous incidents, the scale of these strikes is much larger. Moreover, a ground invasion followed on this occasion. Ankara’s explicit objective is to oust all Kurdish forces from areas along the border. The operation was indicative of Erdogan’s determination to pursue this course; in doing so, he sought consent for his military actions from both Russia and Iran, but apparently not from Washington.

Secretary of Defense James Mattis has stated that the United States is “very alert” to the escalating tensions between Turkey and the Kurds and is quite concerned about those developments. But it isn’t clear what the Trump administration would—or could—do to restore calm. Ankara shows no sign of backing down now that Turkish leaders have embarked on a full-scale military offensive.

The situation would be bad enough if the overall relationship between the United States and Turkey was on a sound footing. But that is not the case. Even before the attempt to crush the Kurds, there was growing unease and anger among American policymakers over the Turkish government’s behavior. Erdogan used the July 2016 abortive military coup in his country as a pretext to impose a crackdown that amounts to a systematic dismantling of his country’s democratic institutions. He has jailed thousands of real or imagined political opponents, including journalists, teachers, and judges. Turkey now has more journalists behind bars than any other country.

There is also growing concern about Ankara’s external behavior. The Erdogan regime’s policy regarding ISIS over the years has been ambivalent at best. A noticeable rapprochement between Turkey and Russia is also evident. Ankara has concluded several major energy deals with Moscow—a move that runs directly counter to the U.S.-led policy of tightening economic sanctions on Russia for the Kremlin’s annexation of Crimea and continued support for secessionist rebels in eastern Ukraine. In an even more provocative move, Erdogan signed a $2.5 billion deal in late December 2017 to purchase Russian S-400 air defense missiles.

The Syrian Kurds are now playing a role akin to the “other woman” in an already troubled, if not entirely dysfunctional, marriage. Given the affection for Kurdish allies in both Iraq and Syria among influential Americans—especially conservatives and neoconservatives—Turkey’s military offensive in northern Syria will undoubtedly put even more pressure on Washington to reassess its ties with Ankara. For its part, the Erdogan government seems determined to crush the Kurds and to chart an independent course both domestically and internationally, regardless of U.S. wishes. Even if the current crisis recedes, the long-term prognosis for the relationship between Washington and Ankara is not good.