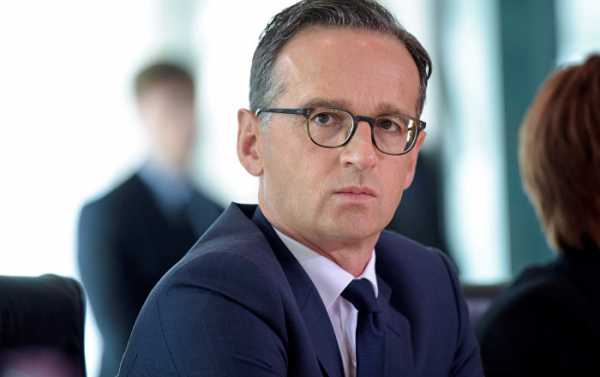 The Netanyahu government intends to ‘apply sovereignty’ to large swathes of UN-recognized Palestinian territories in the West Bank less than a month from now, with Palestinian officials and militant groups warning that they will not hesitate to use force to stop Tel Aviv from moving forward with its plans.

German Foreign Minister Heiko Maas is set to travel to Israel on Wednesday to personally warn Israeli officials that there will be “consequences’ if the Jewish State moves forward with its plans to annex about a third of the West Bank, Axios has reported, citing Israeli officials and European diplomats.

During the trip, Maas is expected to meet with Prime Minister Benjamin Netanyahu, Defence Minister Benny Gantz, and Foreign Minister Gabi Ashkenazi. During the visit, he is expected to convey two messages to the Israelis, including a) that Israel is very important to Germany and Berlin would like to strengthen the alliance, and b) that “any steps toward unilateral annexation” of West Bank territories could damage relations with both Berlin and Brussels.

News of Maas’s upcoming trip coincides with Berlin’s preparations to take up the role of representative of the European Union at the United Nations Security Council, and, simultaneously, the presidency of the European Council. After his meeting with Israeli officials, Maas is expected to discuss the response with other EU foreign ministers.

Over a dozen Western European embassies in Israel have protested the Netanyahu government’s plans for the West Bank and the Jordan Valley, with Germany, France, the UK, Italy, Spain, the Netherlands, Ireland, Sweden, Belgium, Denmark and Finland sending a formal note to Tel Aviv. In it, the countries warn that if implemented, the move to ‘apply sovereignty’ would be a violation of international law that would reduce the chance for regional peace and harm Israel’s standing in the eyes of other nations.

The news follows reports last week that Mossad chief Yossi Cohen paid an unannounced trip to Egypt to gauge the possible reactions from Palestinian actors, including political and militant group Hamas, to Prime Minister Netanyahu’s West Bank plans. The militant group repeatedly warned last month that it would not hesitate to fight Israel if it proceeded with the plans.

Meanwhile, Tel Aviv’s plans also threaten its ties with Egypt and Jordan, the only two Arab nations which recognize Israel and maintain relations with the country. Last month, Jordan’s president and King threatened to reconsider Amman’s relations with Israel, and to renounced the 1994 peace treaty.

Palestinian Authority President Mahmoud Abbas has said that East Jarusalem will no longer be bound by agreements with the US and Israel, “including those related to security.”

Prime Minister Netanyahu says he has no intention of deviating from his plans, which would put about 1,200 square km, of UN-recognized Palestinian territories under Israeli control.

Netanyahu and Likud made ‘applying sovereignty’ in the West Bank settler areas a key plank in the last three election cycles, which finally led to the formation of a new government in April.

The Trump administration, which laid out its vision of new Israeli-Palestinian peace plan in January, has promised to support Tel Aviv. The peace proposal, dubbed ‘the Deal of the Century’, proposes allowing Israel to formally take control large swathes of Palestinian territory, including most of Jerusalem, in exchange for billions of dollars in financial aid to the Palestinians. President Abbas blasted the plan immediately after its publication, saying Jerusalem was “not for sale” and that the document belongs in “the garbage can of history.”