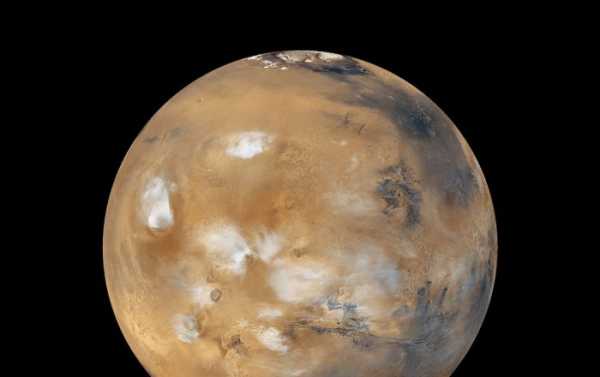 Mars has long attracted scientific attention and posed various mysteries. Its two small moons are known for their irregular shape and one – Deimos – has an unusually tilted orbit. The off orbit was just a fact and raised no suspicions until astronomers decided to look for explanations of the irregularities.

Researchers from the SETI Institute and Purdue University – both in the US – claim that the reason that the Martian moon Deimos has a tilted orbit is because, billions of years ago, the planet had a ring. Their new findings are to appear in the Astrophysical Journal Letters and a preprint is available on arXiv.org.

Astronomers discovered the two moons of Mars, Phobos and Deimos, in 1877, and long believed them to be captured asteroids. Later, when scientists studied their orbits, which are nearly at the same plane as the Martian equator, it was concluded that Phobos and Deimos formed at the same time as the planet itself. The only unusual fact about the orbit of the more distant moon Deimos is its two-degree tilt, although scientists did not consider the fact to be relevant to the origin of the celestial body.

“The fact that Deimos’s orbit is not exactly in plane with Mars’s equator was considered unimportant, and nobody cared to try to explain it. But once we had a big new idea and we looked at it with new eyes, Deimos’s orbital tilt revealed its big secret”, said lead study author Matija Ćuk, a researcher at the SETI Institute.

The big idea Ćuk refers to appeared in 2017 in works of David Minton, a professor at Purdue University, and his graduate student, Andrew Hesselbrock. According to the researchers, Mars’s inner moon Phobos is losing height and, in roughly 70 million years, it will get so close to Mars that the planet’s gravitational field will tear the moon apart to create a ring. Minton and Hesselbrock suggested it had already happened in past and generations of Martian moons had been crushed into rings. After each time, the ring would create a small moon and the cycle would repeat.

The new study shows that this cyclic moon theory can explain Deimos’s irregular orbit. After running simulations, the astronomers from the SETI Institute and Purdue University came to the conclusion that during one of these cycles, the ring pushed the newborn moon outwards. Outside the ring, the new moon came to an orbital resonance with Deimos – the former’s orbital period was three times smaller than the latter’s, a calculation that according to the astronomers would cause the tilt. To produce such a 2-degree inclination in Deimos’s orbit, the simulation showed the inner moon would have to be 20 times more massive than today’s Phobos. Mars’s gravity would have – according to the researchers – then destroyed one of predecessors of Phobos into a new ring and a new cycle would begin.

This idea implies that Mars had a prominent ring for much of its history. The researchers believe that Phobos is relatively young, compared to Deimos. While the later has existed for billions of years, the former formed about 200 million years ago when dinosaurs walked the Earth.

The new theory is waiting for peer-reviewed confirmation. The scientists are looking forward to a Japanese mission to Phobos planned for 2024 which will collect samples of its surface and bring them back to Earth. “I do theoretical calculations for a living, and they are good, but getting them tested against the real world now and then is even better”, stated Ćuk.