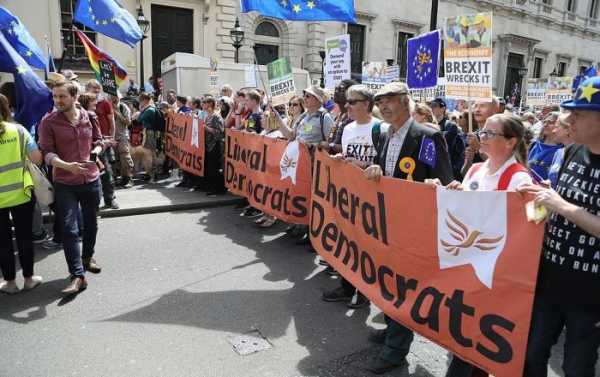 As violence erupts throughout the United States in response to the killing of George Floyd, the United Kingdom has yet to comment on the police response. Acting Liberal Democrat leader Ed Davey claims this is due to the government’s desire to strike a post-Brexit trade deal with the US.

Acting leader of the Liberal Democrats Ed Davey urged UK Prime Minister Boris Johnson on Friday to publicly call out US President Donald Trump for the police brutality against demonstrators and journalists reporting on protests throughout America.

In a letter to the Prime Minister, Davey said that Johnson’s unwillingness to “speak truth to power” revealed an imbalance in the UK’s historic close relations with the US.

In an interview with The Independent following the official launch of his leadership bid, Davey said that the PM’s poor handling of post-Brexit trade talks with the European Union has seen him “pinned in a corner” and desperate not to anger the US as the London pursues a comprehensive trading agreement with Washington.

Davey added that the Prime Minister’s previously stated “pride in Britain’s place in the world” means nothing “if we are not willing to stand up when we see fundamental democratic values being infringed, especially coming from one of our closest allies”.

While not wanting to revisit the arguments over the EU, Davey highlighted Brexit “hotheads” in government as the reason for Johnson’s silence and their insistence on seeing the UK cut ties with Europe.

On Friday, Davey joined a call by 164 MPs to end the sale of weaponry to the United States.

​The Prime Minister has said he is “appalled” by the killing of George Floyd, an African American man who died at the hands of US police, but has yet to comment on President Trump’s response to the subsequent protests.

Law enforcement across the US has cracked down harshly in response to the mass protests, using rubber-coated steel bullets and tear gas.

According to the Independent, the British embassy in Washington has raised concern over British journalists being impeded from covering the demonstrations by law enforcement.

Following the resignation of former Lib Dem leader Jo Swinson after losing her East Dunbartonshire seat in the 2019 general election, the party delayed its leadership election to August.

So far, Bath MP Wera Hobhouse and Layla Moran, the MP for Oxford West and Abingdon, have thrown their hats in the ring.