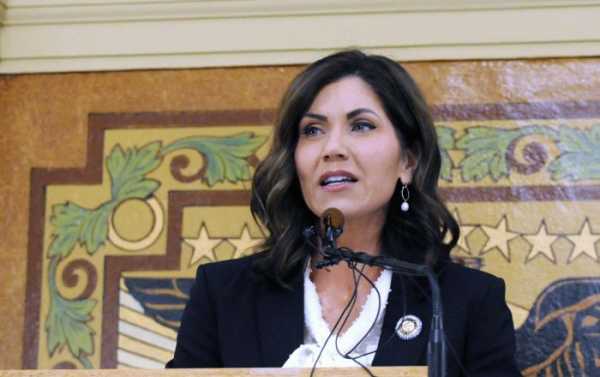 Following her isolation after testing positive for coronavirus, Trump campaign advisor Kimberly Guilfoyle may have been in contact with a number of GOP figures including those close to the president.

South Dakota Governor Kristi Noem flew with President Trump on Air Force One on Friday after closely interacting with Kimberly Guilfoyle, a senior presidential campaign advisor and the girlfriend of Donald Trump Jr – who has been confirmed positive with COVID-19, The Associated Press reported on Monday.

According to AP, the governor had an exchange with Guilfoyle, who was confirmed to have coronavirus on Friday, during a campaign fundraiser in South Dakota the previous day.

The two were also reportedly seen hugging each other during Guilfoyle’s visit last week.

Communications director Ian Fury confirmed on Twitter that Noem had “conferred” with the White House doctor “immediately before boarding Air Force One”, and was cleared to travel with the president.

​While flying to Washington, D.C. with Trump on Friday, Noem was not wearing a face mask, an office spokeswoman, Maggie Seidel, told the AP.

Asked about Noem’s Air Force One trip during a briefing on Monday, White House press secretary Kayleigh McEnany confirmed that both the president and those around him are tested frequently.

​Other Republican officials have potentially been in contact with Guilfoyle including Susan Gianforte – the wife and running mate of Republican gubernatorial candidate Greg Gianforte.