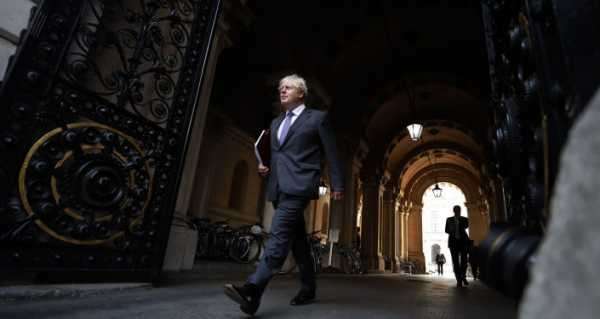 Earlier, a bipartisan group of US lawmakers warned Britain’s prime minister that they had “grave concerns” over his Internal Market Bill, pointing to its capacity to “invalidate or override the Northern Ireland protocol,” which they said might have “disastrous consequences” for the Good Friday Agreement which ended the Troubles in Northern Ireland.

The US lawmakers criticising the British government’s Internal Market Bill will eventually come to understand what London is doing, Prime Minister Boris Johnson has announced.

Asked if House Speaker Nancy Pelosi ‘had it wrong’ in warning last week that there would be “no chance” for a US-UK trade deal if Irish peace were undermined, Johnson said that “possibly, the vital importance of protecting the symmetry of the Good Friday Agreement is something that may have been lost so far in the presentation of this matter.”

“What we’re trying to do here is really provide a belt and braces protection against extreme interpretations of the [Northern Ireland] protocol,” Johnson added, accusing the European Union of “signally failing” so far to rule out a possible “blockade” situation between the UK and Northern Ireland if there is no deal once the post-Brexit transition period expires on December 31.

Johnson also warned that if the UK does go on to set up an external tariff regime with the European Union, it “would be quite formidable for some of their products,” adding that “that’s even more reason why everybody should want to agree a zero tariff, zero quota arrangement.”

The Internal Market Bill passed a second reading in the House of Commons on Tuesday, although 30 Conservative MPs, including former Prime Minister Theresa May abstained after critics alleged that it breaks international law by contradicting the EU-UK Withdrawal Agreement by scaling back some of the UK’s obligations under that treaty.

Johnson told lawmakers Wednesday that the Internal Market Bill is intended to protect the UK’s integrity, and called on all parties in parliament to support it.

The Irish border issue has long been a key sticking point in Brexit talks between London and Brussels, with a Northern Ireland Protocol established last year and aimed at preventing the creation of a hard border between Northern Ireland and Ireland, which remains a part of the EU.

Johnson has set a deadline of October 15 on progress for a UK-EU free trade deal, warning that both sides should be ready to abandon talks and “move on.”

A group of US lawmakers wrote a letter to Johnson on Tuesday, informing him that US-UK trade relations would be “directly affected” if the Internal Market Bill were passed.