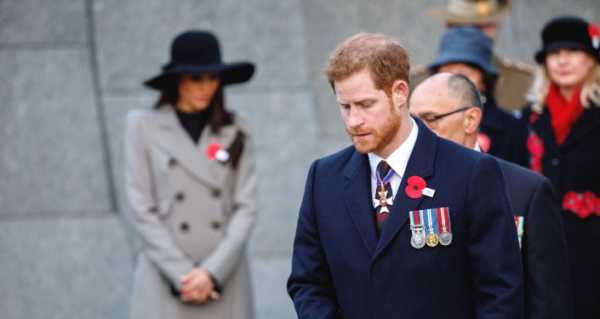 Prince Harry’s return to the UK for his grandfather Prince Philip’s funeral is expected to be a pivotal point for the British royal family recently taken aback by his and Meghan’s bombshell Oprah Winfrey chat.

Prince Harry and Meghan Markle have, alongside the rest of the royal family, paid a tribute to Prince Philip, after he died on Friday morning, having suffered from a number of health issues earlier in the year.

“Thank you for your services… You will be greatly missed,” their short tribute posted on their Archewell website reads.

The 21-word line, which takes up the whole of the website’s main page, was first revealed by their pal Omid Scobie, who is also a co-author of their biography Finding Freedom.

Harry will be attending the funeral at St George’s Chapel, Windsor, which is likely to be next week. It is not immediately clear if heavily-pregnant Meghan would join him, which is believed unlikely by some in the circumstances.

Also, the debate hasn’t yet ceased about the Sussexes’ explosive sit-down with CBS host Oprah Winfrey, which was aired on 7 March, while the Duke of Edinburg was in hospital. The interview is understood to have shaken the royals greatly, as it alleged there was racism running in the family, which some of its members denied, with the Queen for her part promising a private in-family investigation into the matter.

A source close to the family shared with the Daily Mail: “’Harry will absolutely do his utmost to get back to the UK and be with his family”.

According to media reports, chances are Harry will make the journey to London by private jet from his home just outside Los Angeles, and it is understood he may be permitted to use a diplomatic exemption to waive the conventional COVID quarantine rules applying to flights from abroad.

The Duke of Edinburgh, the longest-serving consort to a monarch in British history, passed away on 9 April. Between 18 February and 18 March, he was treated for an unspecified medical condition at the King Edward VII hospital, at some point sent to a different medical institution to undergo a heart surgery. It happened weeks after and the Queen and he were administered the first jab of the coronavirus vaccine.