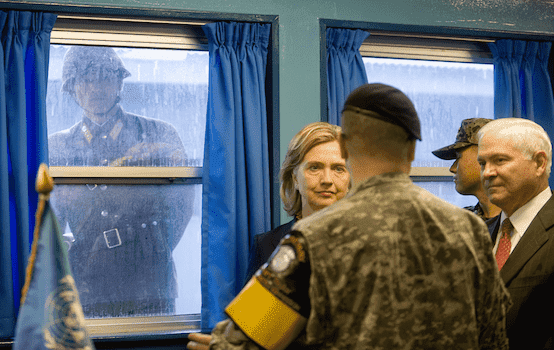 With his recent “my (nuclear) button is bigger than yours” taunt, Donald Trump’s rhetoric has fully descended into school yard braggadocio, with North Korea’s Kim Jong-un as a convenient foil. But his administration’s overwhelming reliance on military and economic pressure rather than on negotiations to influence North Korea’s nuclear weapons and ICBM programs is hardly new. It is merely a continuation of a well-established tradition of carrying out what the national security elite call “coercive diplomacy.”

As Alexander George, the academic specialist on international relations who popularized the concept, wrote, “The general idea of coercive diplomacy is to back one’s demand on an adversary with a threat of punishment for noncompliance that he will consider credible and potent enough to persuade him to comply with the demand.” The converse of that fixation on coercion, of course, is rejection of genuine diplomatic negotiations, which would have required the United States to agree to changes in its own military and diplomatic policies.

It is no accident that the doctrine of coercive diplomacy acquired much of its appeal on the basis of a false narrative surrounding the Cuban Missile Crisis of 1962—that John F. Kennedy’s readiness to go to war was what forced Khrushchev’s retreat from Cuba. In fact, a crucial factor in ending the crisis was JFK’s back-channel offer to withdraw U.S. missiles from Turkey, which were useful only as first strike weapons and which Khrushchev had been demanding. As George later observed, enthusiasts of coercive diplomacy had ignored the fact that success in resolving a crisis may “require genuine concessions to the opponent as part of a quid pro quo that secures one’s essential demands.”

The missile crisis occurred, of course, at a time when the United States had overwhelming strategic dominance over the Soviet Union. The post-Cold War period has presented an entirely different setting for its practice, in which both Iran and North Korea have acquired conventional weapons systems that could deter a U.S. air attack on either one.

Why Clinton and Bush Failed on North Korea

The great irony of the U.S. coercive diplomacy applied to Iran and North Korea is that it was all completely unnecessary. Both states were ready to negotiate agreements with the United States that would have provided assurances against nuclear weapons in return for U.S. concession to their own most vital security interests. North Korea began exploiting its nuclear program in the early 1990s in order to reach a broader security agreement with Washington. Iran, which was well aware of the North Korean negotiating strategy, began in private conversations in 2003 to cite the stockpile of enriched uranium it expected to acquire as bargaining chips to be used in negotiations with the United States and/or its European allies.

But those diplomatic strategies were frustrated by the long-standing attraction of the national security elite to of the coercive diplomacy but also the bureaucratic interests of the Pentagon and CIA, newly bereft of the Soviet adversary that had kept their budgets afloat during the Cold War. In Disarming Strangers, the most authoritative account of Clinton administration policy, author and former State Department official Leon Sigal observes, “The North Korean threat was essential to the armed services’ rationale for holding the line on the budget,” which revolved around “a demanding and dubious requirement to meet two major contingencies, one shortly after the other, in the Persian Gulf and Korea.”

The Clinton administration briefly tried coercive diplomacy in mid-1994.  Secretary of Defense William Perry prepared a plan for a U.S. air attack on the DPRK Plutonium reactor after North Korea had shut it down and removed the fuel rods, but would not agree to allow the International Atomic Energy Agency (IAEA) to determine how many bombs- worth of Plutonium, if any, had been removed in the past. But before the strategy could be put into operation, former President Jimmy Carter informed the White House that Kim Il-sung had agreed to give up his plutonium program as part of a larger deal.

The Carter-Kim initiative, based on traditional diplomacy, led within a few months to the “Agreed Framework”, which could have transformed the security situation on the Korean Peninsula. But that agreement was much less than it may have seemed. In order to succeed in denuclearizing North Korea, the Clinton administration would have been required to deal seriously with North Korean demands for a fundamental change in bilateral relations between the two countries, ending the state of overt U.S. enmity toward Pyongyang.

U.S. diplomats knew, however, that the Pentagon was not willing to entertain any such fundamental change. They were expecting to be able to spin out the process of implementation for years, anticipating the Kim regime before it would collapse from mass starvation before the U.S. would be called upon to alter its policy toward North Korea.

The Bush administration, too, was unable to carry out a strategy of coercive diplomacy toward Iran and North Korea over their nuclear and missile programs because its priority was the occupation of Iraq, which bogged down the U.S. military and ruled out further adventures. Its only coercive effort was a huge March 2007 Persian Gulf naval exercise that involved two naval task forces, a dozen warships, and 100 aircraft. But it was aimed not at coercing Iran to abandon its nuclear program, but at gaining “leverage” over Iran in regard to Iran’s role in the Iraq War itself.

On nuclear and missile programs, the administration had to content itself with the highly subjective assumption that the regimes in both Iran and North Korea would both be overthrown within a relatively few years. Meanwhile, however, Vice President Dick Cheney and Secretary of Defense Donald Rumsfeld, whose primary interest was funding and deploying a very expensive national missile defense system, killed the unfinished Clinton agreement with North Korea. And after Secretary of State Condoleezza Rice got Bush’s approval to negotiate a new agreement with Pyongyang, Cheney sabotaged that one as well. Significantly no one in the Bush administration made any effort to negotiate with North Korea on its missile program.

Unlike the Bush administration, the Obama administration pursued a carefully planned strategy of coercive diplomacy strategy toward Iran. Although Obama sent a message to Supreme Leader Khamenei of Iran offering talks “without preconditions,” he had earlier approved far-reaching new economic sanctions against Iran. And in his first days in office he had ordered history’s first state-sponsored cyber-attack targeting Iran’s enrichment facility at Natanz.

Although Obama did not make any serious efforts to threaten Iran’s nuclear targets directly in a military attack, he did exploit the Netanyahu government’s threat to attack those facilities. That was the real objective of Obama’s adoption of a new “nuclear posture” that included the option of a first use of nuclear weapons against Iran if it were to use conventional force against an ally. In the clearest expression of Obama’s coercive strategy, in early 2012 Defense Secretary Leon Panetta suggested to Washington Post columnist David Ignatius that the Iranians could convince the U.S. that its nuclear program was for civilian purposes or face the threat of an Israeli attack or an escalation of covert U.S. actions against the Iranian nuclear program.

In his second term, Obama abandoned the elaborate multilayered coercive diplomacy strategy, which had proven a complete failure, and made significant U.S. diplomatic concessions to Iran’s interests to secure the final nuclear deal of July 2015. In keeping with coercive diplomacy, however, the conflict over fundamental U.S. and Iranian policies and interests in the Middle East remained outside the realm of bilateral negotiations.

On North Korea, the Obama administration was even more hostile to genuine diplomacy than Bush. In his account of Obama’s Asian policy, Obama’s special assistant, Jeffrey Bader, describes a meeting of the National Security Council in March 2009 at which Obama declared that he wanted to break “the cycle of provocation, extortion and reward” that previous administrations had tolerated over 15 years. That description, which could have come from the lips of Dick Cheney himself, not only misrepresented what little negotiation had taken place with Pyongyang, but implied that any concessions to North Korea in return for its sacrifice of nuclear or missile programs represented abject appeasement.

It should be no surprise, therefore, that Obama did nothing at all, to head off a nuclear-armed North Korean ICBM, even though former Defense Secretary Ashton Carter acknowledged to CNN’s Christiane Amanpour last November, “We knew that it was a possibility six or seven years ago.” In fact, he admitted, the administration had not really tried to test North Korean intentions diplomatically, because “we’re not in a frame of mind to give much in the way or rewards.” The former Pentagon chief opined that no diplomatic concession could be made to North Korea’s security interests “as long as they have nuclear weapons.”

The Obama administration was thus demanding unilateral concession by North Korea on matters involving vital interests of the regime that Washington certainly understood by then could not be obtained without significant concessions to North Korea’s security interests. As Carter freely admits, they knew exactly what the consequences of that policy were in terms of North Korea’s likely achievement of an ICBM.

This brief overview of the role of coercive diplomacy in post-Cold War policy suggests that the concept has devolved into convenient political cover for maintaining the same old Cold War policies and military posture regarding Iran and North Korea, despite new and essentially unnecessary costs to U.S. security interests. The United States could have and should have reached new accommodations with its regional adversaries, just as it had with the Soviet Union and China during the Cold War. To do so, however, would have put at risk Pentagon and CIA budgetary interests worth potentially hundreds of billions of dollars as well as symbolic power and status.

Gareth Porter is an independent journalist and winner of the 2012 Gellhorn Prize for journalism. He is the author of numerous books, including Manufactured Crisis: The Untold Story of the Iran Nuclear Scare (Just World Books, 2014). Follow him on Twitter @GarethPorter

As Tory Rebellion Looms Over COVID Tiers What Other Revolts Did Boris Johnson Face?

Trump: Biden Can Only Enter White House If Proves 80Mln Votes Were Not Obtained ‘Illegally’