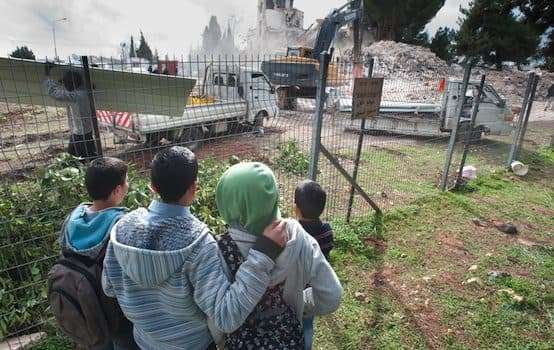 Annexationists of all stripes are crowing about Donald Trump’s blockbuster decision to move the U.S. embassy to Jerusalem.

The government of Benjamin Netanyahu needs no encouragement when it comes to destroying the prospect of a sovereign Palestinian state. But what must have seemed like a green light from Washington was followed by a bill approved in the Israeli Knesset just last week that will require a special two-thirds vote before any part of the city can ever be relinquished to a new Palestinian state.

Meanwhile, the central committee of Netanyahu’s Likud Party voted to allow Israel to annex the Jewish settlements on the West Bank, disputed territory now under Israeli military control but home to 2.6 million Palestinians. Currently, 500,000 settlers live in what can only be described as small cities in the West Bank, making it increasingly difficult to imagine ceding land back to Palestinians in any future peace deal.

Of course, establishing settlements in the West Bank that friend and foe alike have no choice but to accommodate has always been at the heart of Israel’s strategy to defeat the Palestinians. But it now appears to have been adopted by the Trump administration as its diplomatic lodestone, too.

In the early years of occupation, Defense Minister Moshe Dayan, the prime architect of Israeli occupation and settlement policies, presciently laid out the challenge facing Israel in the territories it had recently conquered. It was, he noted, not to reach agreement with the Arabs—but to learn to live without one.

There was a brief moment in the years after the Oslo agreement (signed in 1993 with great fanfare in the Rose Garden) when, in contrast to Dayan’s prescription, the prospect of a historic reconciliation between Zionism and Palestinian nationalism seemed to be on the horizon. But that moment passed long before Trump appeared on the scene.

It has been more than two decades since that last Israeli-Palestinian agreement. In 2017, Trump inherited a diplomatic corpse known as the Oslo process from his predecessors, Democrat and Republican alike, who had been unable to cajole and unwilling to force fractious parties into agreement.

Barack Obama’s failures left the Middle East diplomatic cupboard bare for the first time in a generation, and sapped energy and enthusiasm for the idea of a consensual agreement to end Israel’s occupation. If Trump was not responsible for this failure, his support for Israel’s longstanding policy of creating facts on the ground—in Jerusalem and therefore presumably elsewhere—opens a new and dangerous post-Oslo era of Middle East diplomacy.

This new era confers a premium on unilateral Israeli moves rather than diplomacy, leaves Washington overtly sabotaging an international consensus forged over many decades, and exposes an Arab and Palestinian incapacity to compel Israeli territorial concessions. No wonder the foreign policy cognoscenti—whose shortcomings set the stage that Trump utterly rejects and now commands—are in such a lather.

Palestinians will find no comfort in Washington’s limp suggestion that the Trump declaration on Jerusalem—the most significant move of its sort since the Balfour Declaration in 1917, which announced British support for a Jewish home in Palestine—does not prejudge the shape of a diplomatic solution. Balfour, too, promised that Palestinian prospects would not be prejudiced by its support for Zionism, and we all know how that turned out.

Trump’s precipitous declaration recognizing Jerusalem as Israel’s capital has dramatically altered and, at the same time, defined the diplomatic landscape of this new era, while offering a tailwind to already well-entrenched unilateral Israeli efforts to crush any Palestinian aspiration to sovereignty.

The time has long since passed when Israel’s settlement efforts consisted of a small group of fanatics claiming a barren hilltop. The settlement machine is now an Israeli enterprise engaging almost every one of its national institutions, not least of which are the leading financial, construction, and economic leaders of the private and public sectors.

The political power and domestic needs of this expanding enterprise, numbering more than one half million, create a constituency whose demands for expansion, security, and political, ideological, and institutional power cannot be ignored. So, too, the requirement to ensure the permanence of an Israeli preponderance of power in all of Jerusalem and throughout the West Bank independent of whatever fashion captures Washington’s interest.

Creating a security and legal institutional environment offering seamless integration with Israel across the borderless border is a top priority across all Israeli parties responsible for providing for the everyday needs of the expanding Jewish community across the Green Line.

Not surprisingly, Israel’s right wing has found a winning political strategy in its support for creating such facts. Its political renaissance in 1977 under the leadership of Menachem Begin, long ostracized by Israel’s ruling establishment as a crank, dates exactly from its promotion of wide-ranging settlement, expanding upon the system established by Dayan and Shimon Peres in the first decade after Israel’s historic territorial gains in the June 1967 war.

This effort, pursued for five decades in the teeth of Arab opposition and an international consensus that has, until Trump, refused to recognize the legitimacy of settlement expansion, has succeeded in reducing the space in which Palestinian sovereignty can be exercised. With the White House now sympathetic, we can only surmise that the Palestinians will be even further set back in the coming years.

Geoffrey Aronson is chairman and co-founder of The Mortons Group and a non-resident scholar at the Middle East Institute.