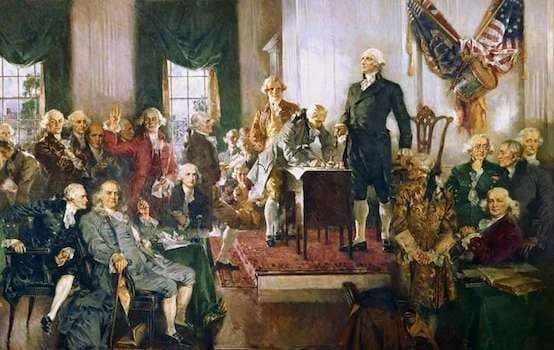 “The deformation of American Civil Religion has ended by devouring America itself.” With those ominous words, Walter McDougall closes his most recent book, The Tragedy of U.S. Foreign Policy: How America’s Civil Religion Betrayed the National Interest. I ordered McDougall’s work shortly after attending a lecture of his last fall in Philadelphia. It was a robust history of American Civil Religion that challenged our society’s deepest beliefs about our national purpose and role in the world.

McDougall, a true American patriot and veteran, takes the reader on a sobering journey that reckons with over a century of American empire and its disastrous effects. While his conclusions are not for the faint of heart, a proper reading of his book is immensely needed as a rising generation of Americans face tough choices about how to deal with the sins (real and perceived) of their forefathers.

Many factors influence a country’s foreign policy, but perhaps the most fundamental is the story or myth that memorializes a society’s purpose and relationship to the divine. The concept of civil religion, according to McDougall, is best defined by political scientist Ellie West as “…a set a beliefs and attitudes that explain the meaning and purpose of any given political society in terms of its relationship to a transcendent, spiritual reality, that are held by the people generally of that society, and that are expressed in public rituals, myths, and symbols.” All societies have civil religions and depend on them for social cohesion and morale, which McDougall acknowledges as both natural and healthy. However, problems arise when the tenets of a civil religion threaten the foundation of a regime itself.

In the case of America, McDougall describes three iterations of American Civil Religion (ACR) and their effects on our actions throughout the world. In the late 1790s, the “Classical ACR” of our Founding Fathers was epitomized by George Washington’s Farewell Address. America was a promised land of religious, political, and economic liberty and a constitutional republic worthy of honor and veneration. To preserve the inheritance that Providence bestowed upon us, we should “avoid entangling alliances and foster goodwill towards all nations.” America was to lead primarily by example, not by force.

In the 1890s, the influences of progressive pastors in mainline churches, altruistic business tycoons, and scientific advancements in the academy forged a divergent new faith that McDougall calls the “Progressive ACR.” According to this civil religion, the Kingdom of God comes not through faith and repentance but through social advances that improve the quality of life for all Americans. The ills of human life—poverty, disease, death—were no longer the fruits of sin or vice but obstacles that could be overcome by an enlightened group of experts directing our progressive society. The new mission of American foreign policy would not be to hide the gospel of progress under a bushel but to take it to the world under the banner of Old Glory. President McKinley summarized this mission best in his second inaugural address when he proclaimed: “The American people…reject as mistaken and unworthy the doctrine that we lose our own liberties by securing foundations of liberty to others. Our institutions will not deteriorate by extension under…tropic suns in distant seas.”

In the 1990s, after a bloody 20th century that saw the defeats of fascism and communism, Francis Fukuyama announced the “end of history” under which the United States would guarantee a global order rooted in liberal democracy, human rights, and free trade. The vision for the “Millennial ACR,” as McDougall labels it, was cast in George H.W. Bush’s 1991 State of the Union address when he described “a big idea; a new world order, where diverse nations are drawn together in common cause to achieve the universal aspirations of mankind.” Regardless of history, culture, or creed, the United States was committed to using any means possible, including military might, to bring liberalism to the world.

As McDougall surveys America’s experiment in empire under the Progressive and Millennial ACRs, he reveals a sobering record of injustice and deceit accumulated by those at the highest levels of American government. For example, he cites dubious motives for the American annexation of Hawaii in 1898 and conquest of the Philippines in 1899, the American-inspired and -supported “coup d’état” against the Columbia regime in 1903 to secure the land for the Panama Canal, Woodrow Wilson’s propaganda campaign to promote a World War that he’d previously said “would be a crime against civilization for us to go into it,” and regime change in Iraq in 2002 under President Bush on pretexts of weapons of mass destruction and democracy promotion.

In each of these instances, McDougall outlines how a presidential administration justified military intervention to the public with an elaborate propaganda campaign and a series of deliberate lies in the name of freedom and human rights. While his analysis is bleak, he does not leave us without hope. In near-prophetic terms, he urges us to return to six “healthy habits” from George Washington’s Farewell Address whose wisdom is “eternally valid”:

In nearly each of these instances, our country has ignored Washington’s exhortations. As Rod Dreher has noted, religion and morality are increasingly absent from the public square. Our national debt is over $20 trillion with an average of $1 million per soldier per year being spent in Afghanistan. Nikki Haley seems to take the hardest line possible in dealing with Russia, Syria, Iran, and North Korea. Countries like Israel and Saudi Arabia receive the unflinching support of the United States on nearly every occasion, and others spend millions of dollars on our soil to influence think tanks and politicians. Secretary Rex Tillerson has been gutting the State Department, whose primary aim is to use diplomacy rather than armed conflict to peacefully resolve crises around the world.

The journey back to a prudent and peaceful foreign policy as outlined in Washington’s Farewell Address may be arduous, but the preservation of our republic demands a fundamental reordering of our grand strategy. A true conservative is a woman or man who shows deference to the past, yet exercises the prudence necessary to reject the ugly and cling to what is beautiful. As in other instances of ugliness that provoke collective guilt, like slavery or the Confederacy, Americans must learn how to both evaluate our history with a critical eye and to celebrate what’s worth preserving. After all, even the former slave Frederick Douglas, while condemning our republicanism as “a sham” and our Christianity as “a lie,” still took “encouragement from ‘the Declaration of Independence,’ the great principles it contains, and the genius of American Institutions” in his stirring address on “The Meaning of July 4th for the Negro.” It’s easy to fall into the trap of either a “progressive” deconstruction of our history or a “conservative” deification of our forbears. A careful study of history, however, demands greater patience and more nuance.

We have in Washington’s address, with McDougall’s elucidation, something that’s beautiful and worth preserving. Let us not despair of our present situation, but embrace the virtues of our past in the hope of a better future.

John A. Burtka IV is executive director of The American Conservative. His writings have been featured in American Theological Inquiry, First Things, The Intercollegiate Review, and Touchstone.