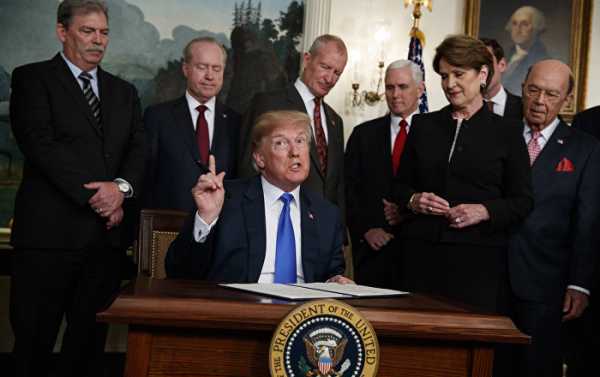 TOPEKA (Sputnik) – The issue of US President Donald Trump’s trade tariffs could determine how farmers in the US state of Kansas vote in Tuesday’s primaries and the November midterm elections, given that many have already been negatively affected.

Residents of the state began voting on Tuesday in midterm primaries to select nominees for the November general elections, which will determine whether Republicans maintain control of the US Congress.

Donna Sullivan, editor of Grass and Grain — an agricultural newspaper serving Kansas and adjoining states — told Sputnik that the issue of trade tariffs has been a hot topic for Kansas voters throughout the campaign.

“It could play a role [in how the people in Kansas vote], but I also think they are really looking long term,” Sullivan said. “I think people are realizing, we will figure this out and in the end, we will end up with stronger, better trade deals.”

Since March, the Trump administration has introduced a series of tariffs on foreign imports, prompting a backlash from many of Washington’s trade partners. The European Union, China and Mexico have all imposed retaliatory tariffs on US goods in response to Trump’s duties on steel and aluminum.

Many of those duties have been aimed the US agriculture sector, with retaliatory foreign tariffs being levied on US soybeans, corn, wheat, cotton, dairy products, poultry, beef and pork, among other goods.

During a visit to Kansas City last month, Trump asked farmers in the state and across the country to “be a little patient” with his policies, vowing that his tariffs would eventually lead to better trade deals for the United States.

But how the issue plays out at the ballot box is largely a question of whether voters are looking at the situation in the short term or long term, Sullivan argued.

Sullivan conceded that in the short term, US farmers would “feel pain” from retaliatory tariffs, but she said the long-term picture could look better.

“It all kind of comes down to suffering now or suffering later. If we can all manage to just suffer through the consequences of these tariffs now, I think the long term big picture will be better,” Sullivan said.

Sullivan explained that timing is an issue because the tariffs are being imposed at a time when farm income has been halved from what it was five years ago.

“Had these tariffs come along five years ago when we were enjoying record high farm income, it might not be quite as painful, but it’s adding to an already very stressed farm economy. It’s adding more pressure and more problems,” Sullivan said.

But for some farmers, the short-term pain eclipses any long-term gains. A local livestock farmer from Kansas told Sputnik that his business has already suffered significantly as a result of the tariffs.

“I had some grain to sell that I should have sold before they got into this trade war. It probably cost us $10,000-20,000 for just not selling it three months earlier,” the farmer said. “I think the tariffs have really been hard on American agriculture, lowered our prices.”

The farmer explained that crop prices were actually below the break-even point before the introduction of tariffs.

“Since they’ve introduced the tariffs, they’ve gone from below break-even to further below break-even,” the farmer said. “I hope things will get better, or there are going to be a lot of people in agriculture going bankrupt in the United States.”

With respect to Tuesday’s primary elections in Kansas, the farmer said he was looking for a candidate for Congress who values agriculture, supports farmers and maintains US trade relations.

“Economics are important to us to stay in business. Many go out of business because they can’t make a living farming because of high cost of equipment, land and labor,” the farmer said.

Jon Brake, publisher of the local weekly newspaper the Manhattan Free Press, told Sputnik that while the tariffs pose a challenge for farmers, they are needed to help other businesses.

“None of us likes tariffs, but you’ve got to use it to get the other people to back off too,” Brake said. “They will hurt in the short term. The farmers are concerned, but farmers can be hurt a little bit to help other people in the country because they’ve been hurting for a long, long time. Car manufacturers, sending the vehicles to China or someplace else and having high tariffs that hurt them.”

In July, the Trump administration announced a $12-billion aid package for US farmers to mitigate potential losses in connection with retaliatory duties imposed in response to the aluminium and steel tariffs.

Washburn University Political Science Professor Bob Beatty told Sputnik that international issues are very important in the Kansas elections because of the issue of trade and the Republican candidates are standing by US President Donald Trump.

“Many Kansans are farmers or are involved in the farming industry, and the possible impact of tariffs on farm products (especially soybeans) by other countries in retaliation for the new tariffs on other countries goods could be huge,” Beatty said. Beatty explained that has been “a bit of an issue in the primaries, but so far Republican candidates are standing by Donald Trump.” However, Beatty said in the general elections in November trade could likely dominate the congressional races.

“The issues in the two districts differ because the districts are different, with the second being more rural and the third more suburban,” Beatty said. “In the second district, key issues in the primary election for Republicans are protecting the right to own guns and the level of support for Donald Trump. In the general election the key issues for all voters will be the possible impact of tariffs on agricultural goods and (pro and con) level of support for Donald Trump.”

Beatty also said that in Kansas’ third district Democratic primary, the key issues seem to be who can best defeat Yoder and be progressive fighter for the district. “In terms of actual issues, all the candidates are pro-choice, pro-education, and anti-Trump. In the general election the gun issue will arise, both pro can con, as will the illegal immigration issue, both pro and con,” Beatty said.

East-West Strategic Advisors Managing Partner Michael Moore told Sputnik that Kansas residents will consider international issues when they vote because trade is a matter of primary importance for the state.

“Trade is number one issue,” Moore said. “Also Russia due to sanctions has now taken over the United States as the world’s largest wheat exporter, which directly impacts Kansas.”