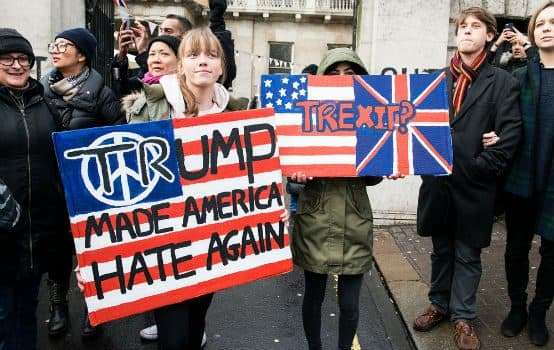 Some snooty Londoners view anything “south of the river” as—to use your president’s own terminology—a bit of a “shithole.” The truth is that there are some lovely parts of south London, but one area that has never been all that charming is Battersea. In the 19th century, this part of the city became an industrial hub and the area is still dotted with old candle factories and corn mills. Battersea power station is the most famous relic of this past and it is currently in the process of being converted into Apple’s HQ in Britain. The new American embassy is also now located in Battersea, next to the Thames. This has done wonders for south London’s reputation. Meanwhile, the embassies of Haiti, El Salvador and most African countries remain north of the river in snob-friendly spots such as Bloomsbury, Marylebone, and Mayfair.

In keeping with traditional London snobbery, Donald Trump has refused to go south of the river. He has canceled his trip to open the U.S. embassy there in February and the British aren’t sure what to make of this. Some people are delighted, thinking that we have managed to ward him off. Others are panicking, for the very same reason. It seems there are a variety of explanations as to why Trump called off his trip: a “bad deal” on the sale of the old U.S. embassy in Mayfair, a fear of a hostile reception, no meeting with the Queen. When Barack Obama visited the UK, he got the full royal treatment. So Donald Trump may have a point. Why should one president receive a grander welcome in Britain than another?

What is clear is that it should not be cause for celebration that the current American president thinks it is not worth his while coming to our small island. Brexit is looming and Britain could do with some friends—and trade deals—but we seem to be doing our best to ensure nobody likes us. Meanwhile, Emmanuel Macron, who arrived in Britain this week, avoided a diplomatic meltdown when Trump visited France for Bastille Day in July last year. Events went smoothly and without incident. Trump flirted with Brigitte Macron; America’s first lady charmed Paris. Brexit Britain could only look on, jealously.

Another theory as to why Donald Trump didn’t want to arrive in February is because he knows he isn’t going to be invited to the Royal wedding in May, and he’s upset. It seems unlikely that the actress Meghan Markle will want him there, given that she has been critical of him. But if Obama, who recently had a jovial interview with Prince Harry on British radio, were included on the guest list and Trump was snubbed, that really would be a diplomatic nightmare. Over lesser things the fates of nations have been decided. We’ll just have to wait and see whether or not the happy American bride uses her big British wedding as an opportunity to send a “Never Trump” message to the world. If that happens, Britain may end up being, as Obama prophesied during his final visit as president, at the “back of the queue” for trade talks with the U.S.

Thanks to Trump, Britain is getting used to the fact that international diplomacy now happens online. Theresa May, our prime minister, is clearly not comfortable with this. This weekend, the Sunday Times suggested another reason for the cancellation: Donald Trump was not feeling “enough love” from the British government. Thankfully, Boris Johnson, our foreign secretary, is more of a natural online. When Sadiq Khan, the mayor of London, suggested that Trump had “got the message from the many Londoners who admire America and Americans but find his policies and actions the polar opposite of our city’s values of inclusion, diversity, and tolerance,” Boris decided to throw some shade back. He tweeted that Khan was a “puffed up pompous popinjay,” which sounded like the sort of insult designed to tickle the U.S. president. If Khan is right and snooty Londoners are horrified by Trump, perhaps the best option would be for him to visit other spots in Britain, where he might receive a warmer welcome. Northerners have a reputation for being more friendly. Trump could even meet the Queen at Balmoral, the Scottish home of the Royal Family. Then again, would Trump accept not being given a capital welcome?

This diplomatic debacle has been caused in no small part by the emergence of a new phenomenon in Britain: Trump resistance. The “Stop Trump” UK arm is chuffed because they think they have rattled a president they despise. They also like the idea that they can hermetically seal off Britain from anyone they find unpalatable if they make enough digital noise. Their victory may prove pyrrhic in the long run. For now, however, they couldn’t care less. They have united around the hashtag #ICancelledMyTriptoLondon and have even gathered some high-profile members into their fold, including Jeremy Corbyn, the leader of the Labour party. On Sunday, Corbyn suggested on TV that America is no longer Britain’s most important ally. India, China, and the UN are more relevant, he said. Emily Thornberry, Labour’s shadow foreign secretary, then went on to describe Trump as an “asteroid of awfulness that has fallen on this world.” Donald Trump has provided Britain’s political class with an unparalleled opportunity to grandstand, and for that, they all seem grateful.

Lara Prendergast is assistant editor for The Spectator.