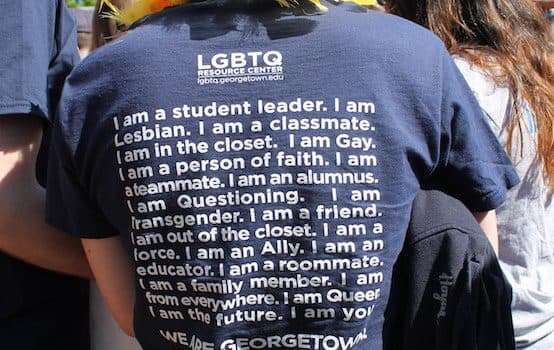 Vogue magazine recently came under fire from the left. The reason? They were culturally appropriating long, decorated nails. In the same week, Georgetown University, our nation’s oldest Catholic institution of higher learning, announced it will now provide a housing option for students wishing to explore their genders and sexual identities.

These two seemingly unrelated stories are in fact part of the same deeply ironic and disturbing phenomenon.

The left, which continues to decry the social faux pas of cultural appropriation with ever-increasing vehemence, is itself guilty of the very same crime. They, the proponents of a predominantly liberal post-Christian culture, have undertaken a great project of appropriating and reinventing orthodox Christian values.

Take again the recent news regarding Georgetown. The notion of an LGBTQ-affirming house, for which, to merit entrance, all residents must be committed to “exploring” their genders and sexualities—whatever that “exploration” entails—is patently antithetical to the teachings of the Church. The Catholic Church, whose traditions Georgetown alleges to uphold, makes the bold proclamation that we, as human beings, are defined by infinitely more than our sexual urges.

Todd Olson, Georgetown’s vice president of student affairs, when discussing the new housing, invoked the Jesuit value of cura personalis, meaning “care for the whole person.” But again, the criteria of the new housing community requires them to reduce their residents’ humanity down to one element, their sexual identity and habits, and ignore all else.

Cura personalis, which was intended to mean caring and cultivating the whole person in order to achieve true flourishing, has, in today’s liberal age, become a blank check to do whatever one wills regardless of consequences either physical or spiritual. It has become a Latin catchphrase that now roughly translates to “you do you.”

This distorting misappropriation, and there is no other word for it, is also occurring beyond the front gates of Georgetown. And in many cases—as at Georgetown—it is happening with the direct assistance of religious leaders who seem either to have fallen for these reinvented tenets or mistaken moral cowardice for compassion.

Proponents of abortion use the language of religion to defend a woman’s right to choose. They couch calls for increased access to birth control and abortion on demand in terms of “justice” and claim that killing the unborn is the best way to serve the poor. Justice and charity are two key teachings within Christianity, preached with fervor for two millennia. Now these very virtues are being used to defend the slaughter of innocents.

Yet according to Vogue, the alleged “white-washing” of long nails is the real sin.

Likewise, the Christian teaching to “love your neighbor” has been repurposed to mean “affirm and approve of every action your neighbor takes. Love not only the sinner, but the sin as well.”

On almost a daily basis, adherents of orthodox Christianity are told to heed the words of Jesus when he cautioned the condemning crowd to only cast a stone if they were sinless. Jesus did not judge, Christians are told, so neither should they. Of course, many of these would-be instructors conveniently forget the other three years of Jesus’s ministry in which he denounced adultery, or indeed the verse after his dismissal of the angry crowd when he tells the pardoned woman to go and sin no more. In their myopia, “judge not” is the only part they have latched onto, which they use as ammunition to demonize those who will not bow before their altars of tolerance.

In this way, the politically charged forces of secularism have created their own quasi-religious culture made up of appropriated terms and imagery, designed to compete with orthodox religion. Mary Eberstadt has termed this “the zealous faith of secularism,” which she claims began with the sexual revolution.

In an article on the topic published in First Things, she writes:

Its missionary aggression also explains why the new secular faith has insinuated itself successfully into many Christian institutions, and why this insinuation has been invariably destructive. At the micro level of personal behavior, the new faith tempts people toward disobedience and cafeteria Christianity. At the macro level, it’s institutionally divisive like no other issue of our day. It turns the followers of Christ into political interest groups.

In our post-Christian world, where tolerance has superseded all virtues—unless of course it’s tolerance towards traditional religion—we are being called to kowtow to the demands of liberalism in deference to what Pope Benedict XVI termed the “dictatorship of relativism.” This dictatorship has become all the more dangerous because it has disguised itself using the language of the religious truths it seeks to suppress. Worse still, thanks to the clever machinations of secular liberalism, many religious figures whose duty it is to provide moral clarity amidst such confusion now seem to believe and preach these reimagined diktats. The left has made it its mission to culturally appropriate Christianity and use it for its own ends; in too many cases, it has been allowed to do so and even aided in its efforts by Christians themselves.

Once again, Eberstadt pinpoints the grave threat such compromise poses to orthodox Christians:

The most insidious threat to the real Church, and even to religious liberty, is not the new secularist church in itself. The greater threat is self-censorship. There is understandable temptation, including among Christians, to preemptively accommodate to this new faith, for all kinds of reasons: saving face, not being “judgy” …Christians need to know that what’s paramount is confronting secular religion and its sex-fixated dogmas, not accommodating them.

The accommodation of the secular religion is precisely what happened at Georgetown. The LGBTQ lobby has managed, for all practical purposes, to appropriate and redefine what cura personalis means within the gates of Georgetown, and has persuaded the Jesuit administration, with seemingly little difficulty, to go along with their game.

If orthodox Christianity is to survive in an evermore hostile culture, its practitioners and leaders will need not only to withstand the pressure to accommodate and self-censor, but to repossess their own language and tenets that have been exploited by the left.

They would do well to follow the example of Father Walter Ciszek, S.J., who was imprisoned in the Soviet Union for his faith and who embodied the essence of cura personalis as it was originally intended. Despite the grueling conditions he suffered in the Gulag, Father Ciszek tended not just to the physical needs of those around him, but to their spiritual needs as well. Throughout his internment, he performed daily Mass at risk of death, ministered to his fellow prisoners, and, most notably, converted many of his guards.

Those guards tried to subsume him into their godless state. Father Ciszek dared to not only resist their efforts, but to love them enough to show them another way, a higher way of living befitting of men made in the image and likeness of God.

Kelly Marcum is a former intern for The American Conservative and a 2015 graduate of Georgetown University’s School of Foreign Service. She lives in D.C. with her husband.