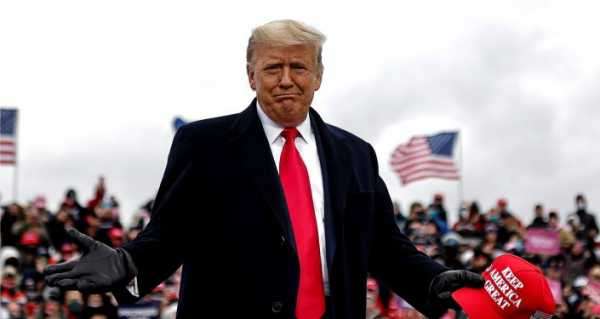 Ex-US President Trump, who is yet to officially acknowledge a White House run in 2024, has been ripping current POTUS Joe Biden’s handling of the US troop withdrawal from Afghanistan. He’s set to address a rally of supporters in Alabama on Saturday.

Donald Trump is about to drop the biggest hint yet that he plans to run for president again in 2024, writes The Daily Mail.

Trump will reportedly tell a rally in Cullman County, Alabama that “it’s time for real leadership in the White House,” according to a top ally cited by the outlet.

​Trump’s visit to Alabama will be his fourth campaign-style rally since leaving the White House.

The former POTUS told Fox News that he hasn’t been able to disclose his plans for the 2024 presidential election campaign to date due to laws, but hinted that Americans will be happy.

“People, you’re going to be happy, ’cause I love this country and I hate to see what’s happening.”

Trump has repeatedly been asked about plans for the upcoming elections, but has never given a clear answer.

Throughout the past week, in statements and television interviews, the former president has been decimating the Biden administration’s conduct in Afghanistan after the Taliban* seized Kabul on 15 August amid the group’s sweeping nationwide offensive.

The triumph of the Islamist militants came in the wake of the hasty withdrawal of US and NATO forces.

At the Alabama rally, Trump is reportedly going to up the ante against Biden and question Americans’ international safety under his presidency.

Trump’s speech is expected to also touch upon other issues, such as Beijing-Taipei tensions, China’s territorial stance in the South China Sea, Israel’s Middle East policy, and the migrant crisis on the US southern border.

This comes as Biden’s approval ratings have plummeted amid the Afghan crisis, fuelled by graphic visuals of chaos in Kabul aired online and TV news channels.

A Rasmussen Reports poll this week reported that Trump would beat Biden by six points if elections were held now.