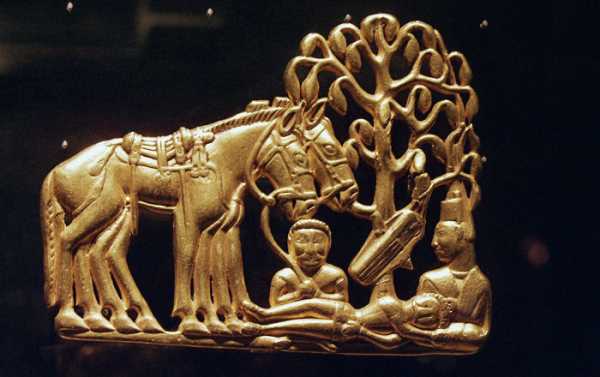 As the ancient Scythians roamed through Europe and Asia, leaving behind a trail of burial mounds for subsequent archeologists to discover, it was assumed that those buried with weapons were men. Only with the advent of modern scientific analysis was it revealed that women warriors were a common sight among the fearsome Scythians.

A burial site of a Scythian Amazon containing precious metal adornments dating to the second half of the 4th century BC has been discovered by a team of archaeologists of the Institute of Archaeology of the Russian Academy of Sciences on an expedition to the river Don.

The preliminary results of a study of the finds were announced on 6 December at a meeting of the Scientific Council of the Institute of Archeology of the Russian Academy of Sciences by the head of the Don expedition, Valery Gulyaev.

Prior to the striking discovery, the team had been studying the burial mound Maiden V in the Ostrogozhsky district of Voronezh region.

One of the most fascinating items found in the barrow of the burial site is the first fully preserved ceremonial headdress of a Scythian woman.

Along the southern and western walls of the barrow were two well-preserved skeletons, laid on wooden beds covered with grass bedding. Under the left shoulder of one of them was a bronze mirror, two spears lay on the left, and a bracelet made of glass beads adorned the left hand.

At the feet were two vessels: a moulded incense burner and black-lacquered one-handed kanfar, dating to the second quarter of the 4th century BC. 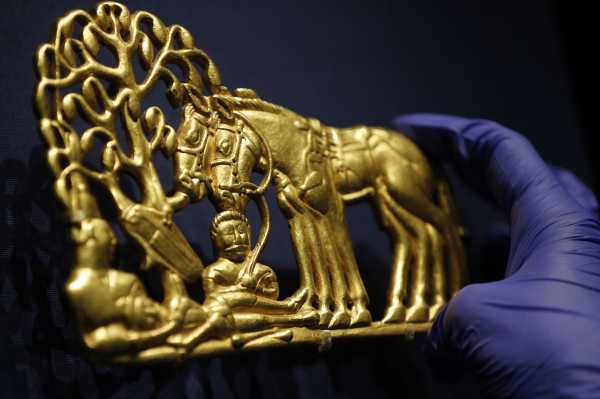 The second skeleton was of a woman 45-50 years old.

This was a respectable age for Scythian times, when the average life span of a woman was 30-35 years.

The female skeleton was wearing a ceremonial headdress – a calaf, with its floral tracery-decorated metal plates quite well preserved, and the rim festooned with pendants in the form of amphorae.

Next to the head of the older woman lay an iron knife wrapped in cloth, and iron arrowhead of a rather rare type: petiolate with a forked end.

These findings, as well as numerous details of the weapons and horse harness, suggest that the buried women were “Amazons”— fierce female warriors dating to the Scythian era among the Iranian-speaking nomadic and semi-nomadic tribes of Eastern Europe. Such mounted women-warriors most likely stood guard over cattle, property, and homes when the menfolk set out on lengthy military campaigns.

In addition to the scattered remains, more than 30 iron arrowheads littered the burial site, besides an iron hook in the form of a bird, horse harness elements, iron hooks for hanging the reins, iron knives, fragments of moulded vessels, numerous animal bones were found in the northern half of the barrow.

Detailed tests on her remains will be conducted and the results announced later.

An earlier archaeological discovery in Armenia unearthed a burial ground dated 7th-6th centuries BC containing the remains of a local Amazon warrior.

Judging by the skeleton, she had been a skilled archer and horsewoman, had well-developed muscles and bore traces of a woman of high social status.

The warrior woman had most likely died in the battle, literally torn to pieces, as the skeleton bore traces of enemy blade and arrow impact.

Scythians were a group of ancient tribes of nomadic warriors whose culture flourished from around 900 BC to around 200 BC, by which time they had extended their influence all over Central Asia – from China to the northern Black Sea.

As archaeologist have been excavating Scythian kurgans, which are the burial mounds of these nomadic peoples, they discovered these people had horse-centred lifestyles, lived in small tribes, and they all needed to be able to defend themselves.

Archaeologists have found skeletons buried with bows and arrows and quivers and spears and horses, initially assuming that anyone buried with weapons must have been a male warrior.

But with the advent of DNA testing and other bioarchaeological scientific analysis, they found that about one-third of all Scythian women were buried with weapons and bore war injuries just like the men and were also buried with knives and daggers and tools.

Thus, scientists received overwhelming proof that there were women answering to the description of the ancient Amazons.