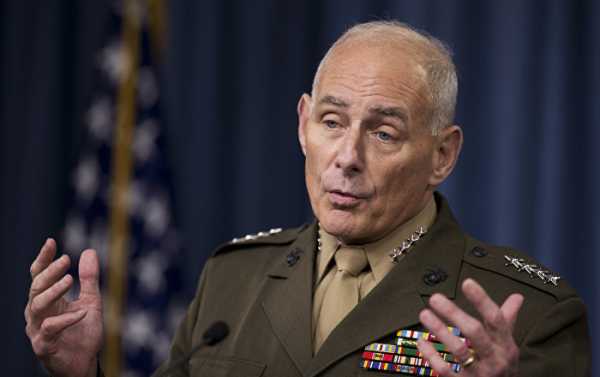 Pressure on White House Chief of Staff John Kelly has been mounting following a series of faux pas, the most recent one being his defense of a senior staff secretary forced to resign after two ex-wives accused him of domestic abuse.

Kelly initially stood up for Rob Porter, regarded as one of the most skilled insider operators in the White House, calling him “a friend, a confidant and a trusted professional,” but after a photo was published showing one of Porter’s ex-wives with a black eye, he told senior staffers on Friday that he had removed Porter when he learned that the allegations were credible.

Porter’s first wife said he kicked her and posted an image of herself with a black eye, which she says she received from Porter punching her. His second wife filed an emergency protective order in 2010 against Porter, who she says aggressively dragged her out of the shower.

Porter forcefully denied the accusations, dismissing them as “simply false.”

Kelly angered Trump last month when he appeared to suggest that the president was backing away from his promise for a border wall with Mexico.

In another misstep, the retired four-star Marine Corps General noted on Tuesday that the president’s immigration proposal, which offered a path to citizenship for 1.8 million young undocumented immigrants brought to the country as children, far exceeded the 690,000 who had signed up for the protections under the Obama administration’s Deferred Action for Childhood Arrivals program (DACA).

In a bid to quash media speculation about Kelly’s possible resignation, White House deputy press secretary Raj Shah said Kelly had not been terminated, and is still chief of staff, CBS News reported on Friday.

​Indeed, a third White House chief of staff in just over a year, along with the quick turnover of other officials, would only fuel perceptions of mismanagement by the Trump Administration.

​Adding to the administration’s headaches, White House speechwriter David Sorensen tendered his resignation on Friday as The Washington Post was preparing to report accusations of domestic abuse leveled by his former wife.

White House turnover is a common thing, but critics say that the number of officials who have left the administration in the past year is too large.