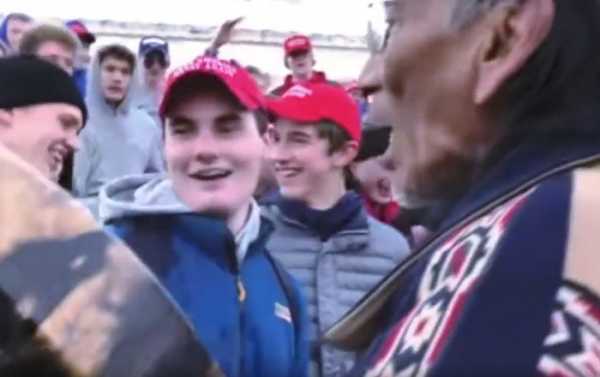 President Donald Trump earlier tweeted that social media and a vast number of media outlets have been verbally attacking a group of students wearing MAGA hats, who were falsely accused of harassing a Native American protester, saying it “has become symbols of Fake News and how evil it can be”.

Nick Sandmann, who has probably become the most famous MAGA hat-wearing teen after being falsely accused of confronting Nathan Phillips, a 64-year-old Native American, believes his actions were not “disrespectful”.

Speaking with NBC’s Savannah Guthrie, Sandmann, who was filmed smiling in the face of Phillips, while he was beating his drum, said that he “had every right” to stand before the man.

“My position is that I was not disrespectful to Mr Phillips. I respect him, I would like to talk to him. In hindsight, I wish we could have walked away and avoided the whole thing”, he said.

The boy’s interview comes shortly after an earlier statement, in which he said that “by remaining motionless and calm, I was helping to [defuse] the situation. I said a silent prayer that the situation would not get out of hand”.

In a parallel development, Twitter has suspended the account named @2020fight that shared the video of the viral standoff between Covington Catholic High School students wearing MAGA hats and Phillips, which prompted a wave of racism accusations against the boys.

The account is assumed to belong to a California schoolteacher, who posted the clip with the caption “this MAGA loser gleefully bothering a Native American protester at the Indigenous Peoples March” on 18 January.

While @2020fight was not the first to share it, that particular tweet and caption helped promote it and foment a nationwide controversy, reportedly racking up over 2.5 million views and 14,400 retweets.

The account was reportedly frozen after CNN Business inquired about the user’s profile picture, which appeared not to be of a schoolteacher, but a Brazil-based blogger.

“Deliberate attempts to manipulate the public conversation on Twitter by using misleading account information is a violation of the Twitter Rules”, a spokesperson for the social media platform said in a statement to The Hill.

The video, shared by @2020fight, showed boys in hats with Trump’s signature brand surrounding a Native American man as he beat his hand drum. Initial media reports suggested that the students were chanting and harassing the elder, with the camera largely focusing on Sandmann’s smiling face.

Shortly after the clip led to a widespread condemnation on social media and beyond, with the boys being slammed as “racist” and disrespectful to Phillips, a full video of the “confrontation” emerged, showing that the Native American man was the first to approach the group of MAGA kids. Phillips walked up to Sandmann and started beating his drum.

As Sandmann later explained, he didn’t step aside and smiled in the man’s face in order to let him know that he was not “going to become angry, intimidated or be provoked into a larger confrontation”.

After facing overwhelming backlash, Sandmann issued a statement, saying that “misinformation” and “outright” lies were being spread about the encounter. He elaborated that a group of African-American protesters shouted “hateful things” at him and his schoolmates.

“The protestor everyone has seen in the video began playing his drum as he waded into the crowd, which parted for him. I did not see anyone try to block his path. He locked eyes with me and approached me, coming within inches of my face. He played his drum the entire time he was in my face”, he wrote.

Addressing the widespread indignation and false accusations, US President Donald Trump described the incident as a symbol of fake news: