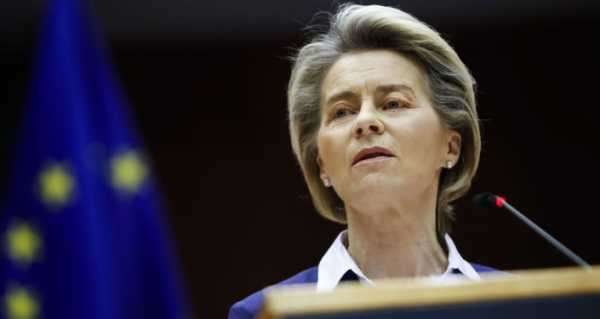 Last month, the European Union courted controversy, even among its own member states, after triggering Article 16 of the Northern Ireland Protocol and effectively introducing a vaccine border between the Republic and Northern Ireland.

Ursula von der Leyen has issued a public apology for “mistakes” in the European Union’s decision to trigger Article 16 of the Northern Ireland protocol in January.

Von der Leyen added that she “deeply” regrets the decision.

“But in the end, we got it right, and I can reassure you that my commission will do its utmost to protect the peace of Northern Ireland, just as it has done throughout the entire Brexit process.”

Following criticism for delays in rolling out the vaccine due to supply shortages, von der Leyen defended the commission’s strategy, saying that the EU had “made a choice” to have more strenuous safety checks prior to administration, as opposed to taking “shortcuts.”

She said that the commission does “not intend to restrict companies that are honouring their contracts with the EU.”

This meant an effective introduction of a vaccine border on the island of Ireland between Northern Ireland and the Republic of Ireland.

As Northern Ireland is part of the United Kingdom, Prime Minister Boris Johnson told von der Leyen he had “grave concerns” about the move.

The bloc later backtracked on its decision to trigger Article 16 in the Northern Irish Protocol, which ends the unrestricted movement of goods between the two sides.

While the EU lags behind, the UK has been lauded for its vaccine rollout having vaccinated more people than all of the bloc members put together.