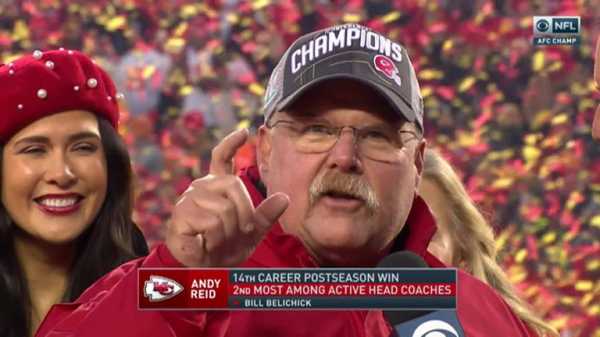 6:24 Andy Reid said the job’s not done yet after lifting the Lamar Hunt Trophy

Former head coach of the Philadelphia Eagles, Reid has a storied history in the NFL as the coach with the most regular-season wins yet to win a Super Bowl (he did win a ring as an assistant coach with the Green Bay Packers in the 1996 season).

Sunday saw Reid improve his record in Championship games to 2-5 having notoriously found it difficult to get his team over the line at this stage of the season. 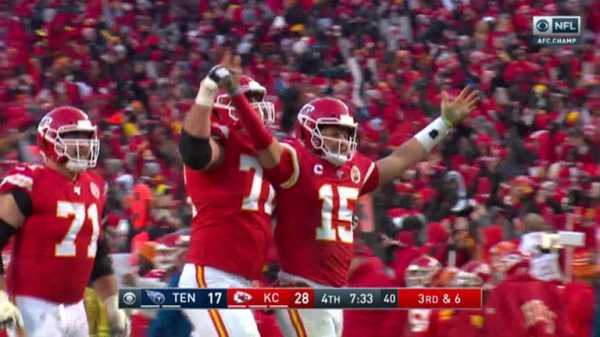 1:10 Patrick Mahomes unleashed a deep pass to Sammy Watkins against the Titans for the receiver’s first touchdown since Week One

In just his second season as a starter, Mahomes has proven himself to be special. Outside of his insane regular-season stats and MVP award last season, he has thrown 11 touchdown passes and no picks in his playoff career so far. Can anyone stop him?

Sky Sports expert Brian Baldinger raved about the 24-year-old’s performance in the Chiefs’ comeback win over the Houston Texans last week, saying “Patrick Mahomes will try to keep every play alive. He doesn’t ever really know if a play is over – he’s going to extend it as long as he possibly can. That ability was clearly on show on his improvised touchdown to tight end Travis Kelce against the Texans, and as he led the Chiefs to touchdowns on seven straight possessions after falling behind 24-0.

He produced more magic against the Titans on Sunday, running in from 27 yards before launching a 60-yard bomb to Sammy Watkins for a touchdown. 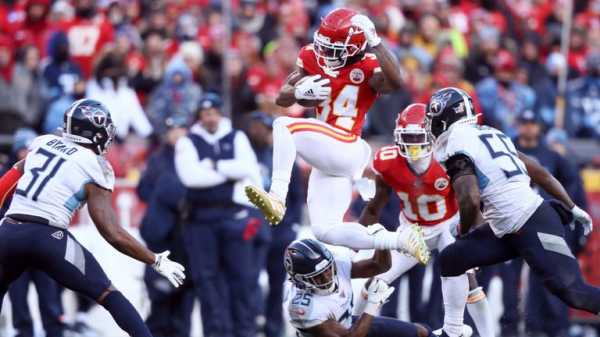 5:59 Highlights of the Chiefs’ win over the Titans as Reid’s men secured their place in Miami

Mahomes led the fifth-best passing offense in the regular season, but he is also surrounded by top talent and has a great connection with his big TE. Baldinger explained: “When he’s in trouble, he’s looking for Kelce, who had three touchdowns there in the second quarter [against the Texans].

“He’s an elite player and they have great chemistry, they know where the dead spot is.”

As well as All-Pro Kelce, Mahomes has speed outside with Tyreek Hill, Watkins, Mecole Hardman, Demarcus Robinson and Damien Williams out of the backfield – all of whom are capable of breaking a game-changing play. 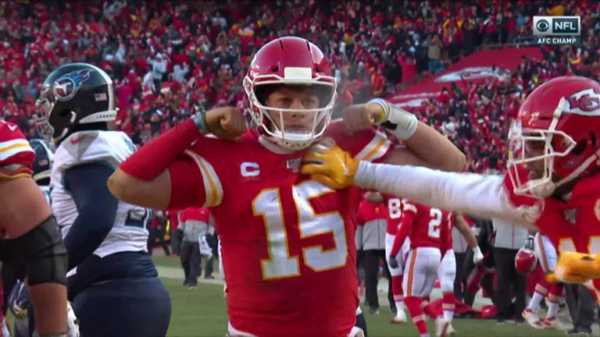 1:18 Mahomes ran for a touchdown that Derrick Henry would have been proud of, rushing 27 yards, dodging and smashing his way into the endzone!

The Chiefs struggled on the ground at times on both sides of the ball in 2019. During the regular season, they averaged the 23rd-most rushing yards per game (98.1) and with a committee backfield, they don’t generally take over games by keeping the ball moving on the ground. However, with Mahomes and the strong passing attack, they don’t often need to.

Mahomes underlined his threat on the ground on Sunday as he led the team with 53 rushing yards and a stunning 27-yard touchdown run.

Reid’s men were also 26th against the run on defense during the season, allowing 128.2 yards per game, however, they managed to restrict running back Derrick Henry to 69 rushing yards on Sunday on the back of his three straight games of at least 180. The Titans star had racked up 188 yards and two touchdowns during Tennessee’s 35-32 win over the Chiefs back in Week 10.

The Chiefs will be making their first Super Bowl appearance in 50 years when they take to the field in Miami, with their last being in 1970 when they beat the Minnesota Vikings in Louisiana.

They have reached the playoffs in 18 seasons since then, most recently losing out to the Patriots in last year’s AFC Championship game. 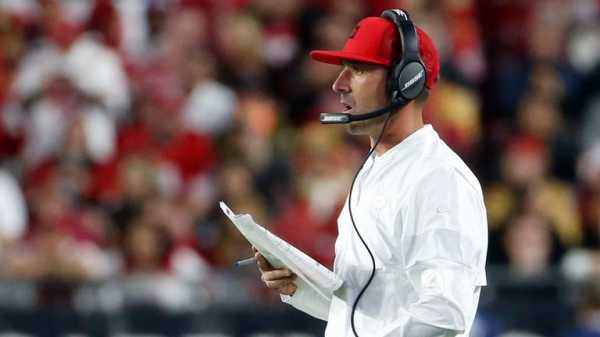 Shanahan is in his third season as the head coach of the 49ers, his first head coaching role in the NFL. After improving an inherited 2-14 to 6-10 in 2017, quarterback Garoppolo went down with an injury early last season as the team dropped to 4-12 and earned the second overall NFL Draft pick.

This season, however, he has led a fantastic turnaround and they finished as the NFC’s top seed. 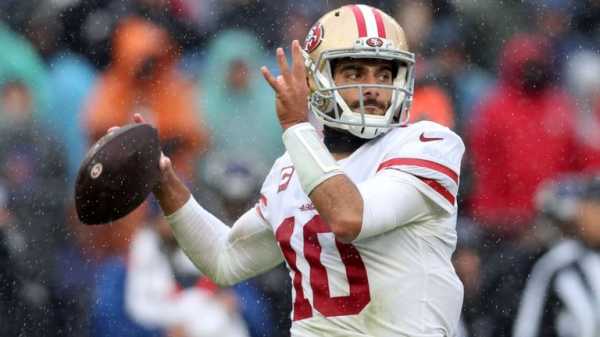 Garoppolo actually owns more Super Bowl rings than his Conference Championship opponent and future Hall of Famer Rodgers, but both of those came when he was the backup to Tom Brady in New England from 2014-17.

Since getting a gig of his own, ‘Jimmy G’ has excelled. He is now 23-5 in his career as a starter, but his individual statistics can be unpredictable from game to game. He had a 102.0 passer rating this season, but had six games under 85.0 and nine over 108.0. 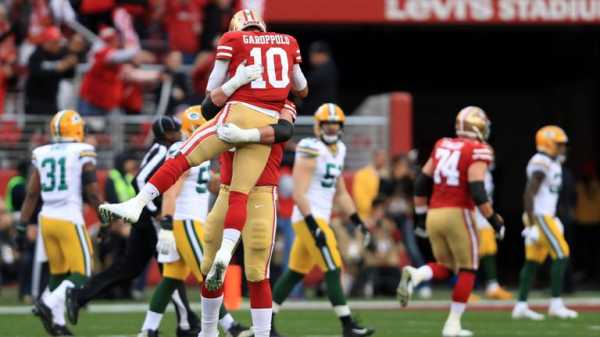 6:07 Watch full highlights of the 49ers’ win over the Packers as Mostert ran in for a four touchdowns

The Niners boasted one of the best defenses in the entire league all season. Baldinger said about their victory over the Minnesota Vikings last week: “That group up front where there’s (Arik) Armstead, (DeForest) Buckner, (Nick) Bosa, they just didn’t stay blocked.

“They chased everything and just harassed the Vikings all day long. They shut the running game down.

“When your front four can play at that level everything in the back end is just better.” 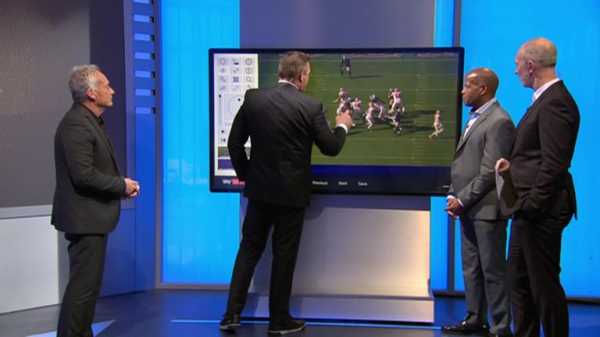 5:52 Baldy and Jeff Reinebold break down the 49ers’ offense

Through the season, they ranked second in overall yards allowed, giving up just 281.8 yards on average, while they allowed only 169.2 passing yards per game, first in the NFL.

On offense, the 49ers – who employ a running back-by-committee approach with Mostert, Tevin Coleman and Matt Breida all splitting time – ranked second in rushing yards per game (144.1). They also have one of the best tight ends in the NFL in George Kittle. 0:34 Watch the second of Raheem Mostert’s four touchdowns against the Packers

The 49ers have a great defense but there could be a weakness in their ability to stop the run. Teams have averaged 112.6 yards per game on them over the regular season, which puts them 17th overall in the league. However, most teams have been playing from behind against them.

The 49ers will have the opportunity to draw level with the Patriots and the Pittsburgh Steelers as they go for their sixth Super Bowl crown. San Francisco’s last win came at the end of the 1994 season when they beat what were then known as the San Diego Chargers, who are now the Los Angeles Chargers. This year has marked their first appearance at the playoffs since the 2013 campaign.