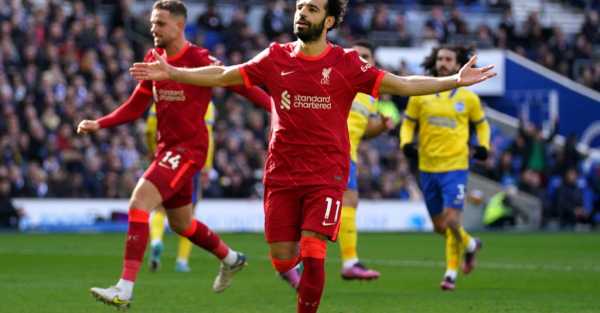 The Egypt international’s contract expires at the end of next summer and the club and his agent are currently at an impasse, with the £400,000-a-week deal reportedly being asked for way in excess of the existing pay structure.

Within a couple of hours of Klopp last week saying the future was in Salah’s hands, the player’s representative tweeted seven crying/laughing emojis.

But the Reds boss said there would be no issue with the player himself inside the dressing room.

“I don’t have to remind any player – and for sure not Mo – of that. No chance,” said Klopp.

“Mo is not a guy for that, not at all. If I don’t line him up (in the team) then his mood goes down. That is possible but (it’s) not against the team or whatever.

“This season everyone is completely committed, we could have some players who don’t play often enough and aren’t in the squad enough and they could create a bad atmosphere. They don’t. They will not. It is a clear commitment for the team for this season and then we will talk about the rest – future, immediate, further.”

Salah is set to be in the squad for Wednesday’s trip to Arsenal despite being forced off with a foot injury in Saturday’s win at Brighton.

Part of the reason the forward has scored so many goals for Liverpool (153 in 238 matches) is his superior fitness and resilience means he is available for nearly every game.

Incredibly he has played 171 of 180 Premier League matches for the club and while some of those absences have been Africa Cup of Nations or Covid related, he has not missed a match through injury since the Champions League semi-final second leg at home to Barcelona in 2019.

“On top of that there is a statistic that Mo is the one player with the least fouls against him; not that he isn’t fouled, just that they are not whistled against him,” added Klopp.

“When you compare him to other strikers it is absolutely crazy how low his number is of fouls against him which the ref whistles. Madness. It means he has constant contact, going down, up again and things like this.

“It (his fitness record) is not only luck, he is probably in since 9am, he is very professional and desperate to play each game.

“It is sports science as well. He worked on his body. It is not possible to do miracles, some players are more vulnerable than others and Mo has the right attitude, right mindset and right body for it as well.

“The nine games I probably left him out once or twice. These things are really hard for him. He tries to be on the pitch in training and games if somehow possible.”