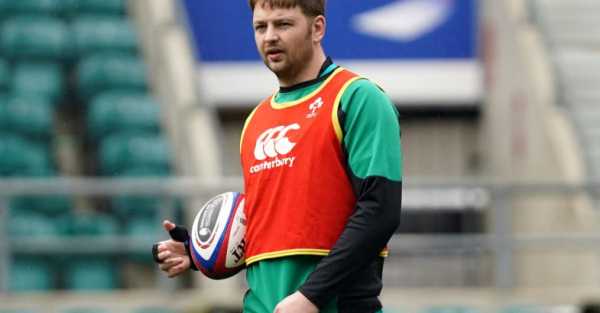 Iain Henderson says it would be “unbelievably massive” for Ireland’s current crop of players to lift silverware on home soil for the first time.

The Ulster captain is poised to make his maiden start of this year’s Guinness Six Nations when Scotland visit the Aviva Stadium for Saturday’s crucial round-five clash.

Henderson, who has endured a frustrating season with injury and illness, is expected to replace the stricken James Ryan in the hosts’ second row on what could be a momentous weekend.

“The chance of being able to lift silverware with any team, especially your country, is absolutely enormous,” he said.

“I’m actually not sure if any guys have lifted silverware internationally at home. That would be unbelievably massive.

“I think the excitement that that has brought us leading into this week has been huge, it’s a massive driver for us.

“But we’ve got to make sure that we set that excitement aside to ensure that we can concentrate on our game.

“The guys who’ve been involved for a number of years know how difficult it is to come across something at international level, some form of silverware.

“We’ve got to focus on the Triple Crown. And then obviously whatever happens after that will be an added a bonus. Hopefully England can do the job on France.”

Ireland are firm favourites to continue their recent dominance against the Scots, having won 10 of the past 11 meetings.

Should that be achieved, they would face an anxious wait to discover whether Eddie Jones’ men are able do them a major favour in the evening kick-off in Paris.

Lock Henderson is among a number of players in Ireland’s ranks to have been in a similar position in 2015.

On that occasion, Ireland defeated Scotland 40-10 at Murrayfield and eventually celebrated wildly having claimed the title on points difference after England – requiring a 26-point winning margin – could only beat France 55–35.

“We were delighted when we finished the game but there was a nervous excitement, it wasn’t a celebration,” recalled Henderson.

“Afterwards we were upstairs in Murrayfield watching the (England) game unfold on the screen.

“Meanwhile, they were trying to get the post-match speeches and all the official stuff was happening but no-one was watching any of it, everyone was just watching the screens, just waiting to see what was happening.

“And I remember towards the end France went to try and play out of their own in-goal area and there were gasps everywhere, a handful of pints had been taken at that stage and the excitement was through the roof.

“I think at the end of it, (Rory) Kockott was playing for France and he booted the ball out and then the place just erupted.

“We then went downstairs and a load of the fans had been watching outside and then they let them all back into the stadium and we were presented with the trophy on the pitch and it was a great experience all around.”

Henderson has been dogged by fitness issues this term, in addition to last month testing positive for coronavirus on his 30th birthday.

He came on as a second-minute replacement during Saturday’s 32-15 win over 14-man England after vice-captain Ryan failed a head injury assessment following the incident which led to the red card for England lock Charlie Ewels.

With Ryan sidelined due to concussion protocols and Ryan Baird out with a back problem, Henderson is likely to pack down alongside Tadhg Beirne against Scotland.

“It’s been in ways an exciting but frustrating campaign for me, so a start would be massive,” he said.

“I’d be delighted to get back in, especially in front of a home crowd.

“It would be unbelievable to have this opportunity against a really good Scottish side to potentially do something special with the lads.”