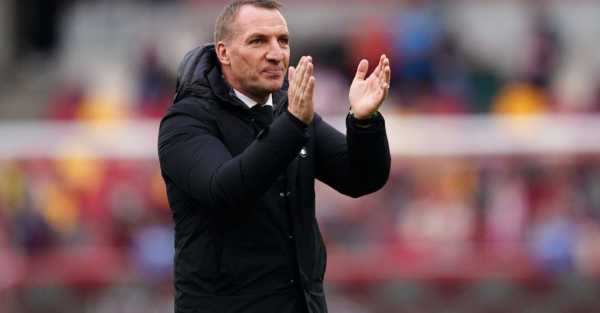 Leicester boss Brendan Rodgers insists he has no choice but to make wholesale changes to his side for the Carabao Cup meeting with Brighton.

The Foxes have had a successful but gruelling week with wins over Manchester United and Brentford sandwiching the thrilling 4-3 Europa League victory over Spartak Moscow in Russia.

A place in the quarter-finals is at stake at the King Power Stadium on Wednesday night, and Rodgers remains confident he can pick a side capable of overcoming the in-form Seagulls.

“Will there be fresh faces? No doubt,” said the Northern Irishman.

“We can’t use the same players all the time, so we’ll definitely make changes, but it doesn’t take away the fact we want to win the game. We’ll be bringing good players into the game.

“We’ll recover, do some preparation work, and then look to get to the quarter-finals.”

Jamie Vardy is one of the players set to be rested having come off at half-time at Brentford with a knee problem.

The former England striker was replaced by Patson Daka, the four-goal hero of Moscow who is pushing for another start.

“I could just see he wasn’t quite moving the same. He wasn’t quite as dynamic and didn’t have that speed that he normally has, so there was no point risking it any further.

“We made the change and brought in Patson, who was fresh and confident after his midweek performance.”