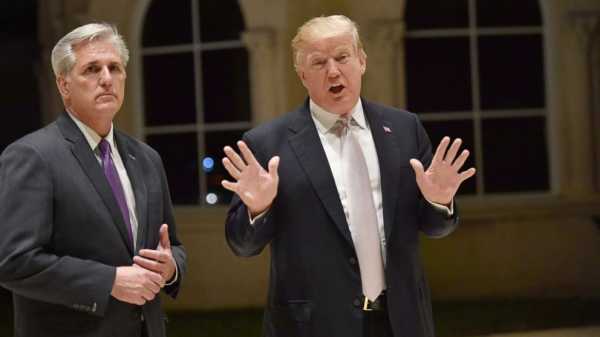 The details of the expletive that still appears very likely to have been spoken by President Donald Trump don’t matter in the bigger picture. Neither do the declarations – “I’m not a racist” – or making fun of a senator’s first name.

For now, the blame game beats out the name game. Trump and his Republican allies would have the public believe that Democrats concocted a story that had the president insulting immigrants based on race; that Democrats don’t want to take care of Dreamers who could be facing deportation in mere weeks; and that they are rooting for a weaker U.S. military.

Deflections and accusations can take the president only so far this week. The president and his negotiating partners will be judged on results in the coming days – and shutdowns stink like other words that start with “s.”

While a shutdown would reflect badly on every Washington leader politically, it would likely be much worse for congressional Republicans who control both chambers — and terrible for the White House.

A crisis like that, a week before the president’s State of the Union address, would not only be embarrassing, it would be bring back all-too-recent questions about whether this GOP team can govern at all.

Democrats are being told by their base that any cooperation on the issue at this point therefore is undue. The fate of the Dreamers was never supposed to be tied to other changes in immigration policy, progressives say, and particularly not now when Democrats have a modicum of leverage.

Republicans have started to accuse Democrats of trying to ram controversial immigration policy when government spending is at the brink, prioritizing “amnesty,” they’ll say, over keeping the government’s lights on.

But the majority of American voters say they want a long-term solution for the so-called Dreamers, and by putting their foot down, Democrats, arguably, benefit from looking like they put their foot down.

Rep. Mario Diaz-Balart, a Miami Republican, was in the room Thursday when Trump reportedly described some African nations as “s—hole countries”, WPLG reports.

“This is a president that said things differently than clearly I would say them,” Diaz-Balart told Local 10’s Glenna Milberg Monday. “I will not comment on what may or may not have been said. The bottom line is I will not be in a position to solve this problem.”

The affiliate wrote the meeting was set up in part to negotiate a deal to extend the Deferred Action for Childhood Arrivals policy – an Obama administration-era policy allowing people who were brought to the U.S. illegally as children to work and go to school under certain conditions.

The Trump administration has said that the program should be phased out and has called on Congress to create a new policy by March.

Diaz-Balart supports extending the program, also known as DACA, and WPLG said he wants to avoid criticizing the president to keep the negotiations on track, WPLG reported.

“I’m the only person from South Florida that has a seat at this table,” Diaz-Balart said according to the affiliate. “I am going to use it not to criticize, not to point fingers, but to stop the imminent deportation of 800,000 young people.”

Visiting constituents in Naples Monday, the affiliate wrote that he said he wants to help DACA participants, known as Dreamers, not call the president or other negotiators like Sen. Dick Durbin, D-IL, names.

“How does it help to point fingers or say names to the very people I have to quietly negotiate with?” Diaz-Balart said, according to WPLG.

“My memory hasn’t evolved. I know what was said and I know what I said.” — Senator Lindsey Graham in an interview with the Charleston Post & Courier about his interpretation of a comment made by President Trump at a White House meeting on immigration last week.