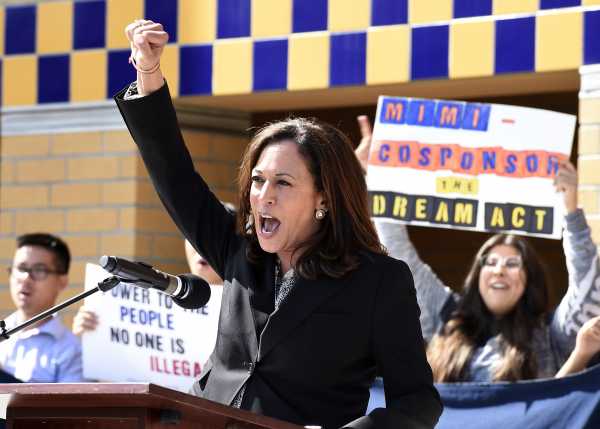 Senate Democrats eyeing the 2020 presidential ticket have been consistent on one message for months: They’re willing to shut down the government over DREAMers.

Since the fight over the lack of a long-term spending bill and immigration deal began in earnest in December, Democrats have tried to use what little political leverage they have to get a permanent fix for the sunsetting Deferred Action for Childhood Arrivals program protecting young, unauthorized immigrants, even if it meant a government shutdown. But some politicians have been more consistent than others.

The past few months have seen a fierce debate on the left — with progressives and immigrant rights groups saying Democrats “caved” by voting to reopen the government twice in two weeks — and others saying Senate Democrats managed to preserve their leverage.

But among some high-profile rumored 2020 contenders, there has been no debate. Sens. Kamala Harris (D-CA), Bernie Sanders (I-VT), Cory Booker (D-NJ), Elizabeth Warren (D-MA), and Kirsten Gillibrand (D-NY) all voted against every recent spending bill because they have not seen a vote on an immigration fix. They did it again on Thursday night, joining a handful of other Democrats voting against a long-term spending bill.

The intraparty debate about whether or not to vote against government spending bills over DACA says a lot about where the Democratic party’s base is at — and how much influence that base has among the party’s rising stars.

The rift explains how Democrats, often portrayed in recent years as the responsible governing party, suddenly became the party of the government shutdown, as progressive groups and immigration rights activists called on senators to stand on principle and stand up to Trump and Republicans.

“This is perhaps the great moral issue and civil rights issue of our time,” Sanders told Vox in a recent interview.

Activists convinced Democrats to shut down the government

Before December, activists were actually nervous about pressuring Congress too much, aware that the DACA problem had been created by Trump announcing he would end the program. Fearing they would be playing into Trump’s rhetoric, activists were hesitant to take the fight directly to Congress. Then, in December, they stood on the steps of the Capitol and demanded lawmakers shut down the government if they could not pass a clean DREAM Act.

Most of the 2020 Democratic names in the Senate signed on to this idea back in November, saying they wanted a DACA fix by the end of 2017. With well-known Senate liberals saying they would withhold their votes on a spending bill unless there was a solution for DREAMers, the sentiment spread out to other liberal figureheads, including Pod Save America, the popular podcast started by former Obama staffers.

Suddenly, the pressure on lawmakers to shut down the government wasn’t just coming from the most progressive wing of the Democratic Party — it was coming from all sides.

“People who want to be president are taking this position, that’s where the base is,” said Angel Padilla, policy director for Indivisible, a national activist group.

Of course, not every rumored Democratic presidential candidate withheld every vote on spending bills. Sens. Sherrod Brown (D-OH) and Chris Murphy (D-CT) have voted in favor of some spending bills in the past, citing the need to fund things like the opioid crisis and farmer relief.

Sanders and other senators also told Vox that this demand wasn’t just about immigration. Some, including red-state Democrat Sen. Jon Tester (MT), were fed up with the lack of spending on community health centers and the opioid crisis, with no long-term deal in sight.

“DACA is a very, very important issue, but it is not the only issue,” Sanders said. “The issue now is whether or not we are going to address the enormous needs facing the working people of this country. And I think it’s imperative that we do that right now.”

How the DACA activists came to have so much clout

Democrats have been moving left on this issue well before Trump was in the White House. The influence of unions in the Democratic Party is one factor. And after Barack Obama was first elected president, the Democrats saw the political advantage of turning out votes in the Latino community, and therefore, fighting for their political issues.

As Vox’s Dara Lind wrote, it would be difficult to imagine a Democratic Party sticking so firmly to the left on immigration issues 10 years ago.

But in the age of Trump, there is much more for Democrats to fight for. Trump has pushed the immigration debate to new levels of urgency. As his administration makes a show out of arresting immigrants and threatening deportation, immigrant advocates and progressive groups are urging Democrats to respond, framing the issue as a matter of life and death.

Activist groups want a clean DREAM Act, giving young, unauthorized immigrants protected legal status and an eventual pathway to citizenship, without other concessions. But because Democrats are in the minority, that position is basically a nonstarter. The party must negotiate with a president who defers to conservative immigration hawks and once reportedly referred to Haiti, El Salvador, and African nations as “shithole countries.”

Some liberal senators have signaled they would make some concessions on border security, but they won’t entertain Trump’s core demands: a border wall, or a bill that would cut legal immigration programs like the diversity visa lottery or family-based immigration in exchange for a DACA deal.

Ultimately, Democrats joined Republicans in reopening the government. Activist groups were furious. With the passage of a long-term spending bill last week, many groups were upset that they still had no guarantee Congress would fix DACA, as Democrats had promised in the fall.

“It felt like a real betrayal,” Ezra Levin, co-executive director of Indivisible, said.

Some Democrats feared that dragging out a shutdown fight in January would hurt their 2018 chances — and indeed, Democrats are hoping to make significant gains in this year’s midterm elections. But there’s also a chance that failing to get a DACA deal would weaken their support from activist groups and their Latino base.

Democrats may want to give Latino voters and those who care about immigration a reason to vote for them, rather than a reason not to vote for Republicans.

Political groups like the Center for American Progress Action Fund have been urging Democrats to take a stand on immigration if they want to remain competitive in 2018. In addition to bolstering Democratic candidates in stalwart blue states like New York and California, immigrants and immigration rights groups will be crucial for turning out votes in states like Colorado, Nevada, New Mexico, Arizona, and even Texas — places that have been inching closer to blue with the help of Latino voters.

Some progressives began calling the five red-state Democrats who voted to fund the government in January the #DeportationCaucus on social media. Though primary challenges over immigration could be a concern, so far, there is just one Democratic senator facing a serious primary challenger, Sen. Dianne Feinstein (D-CA), for more idiosyncratic reasons.

Indivisible, because it is chapter-based, will make case-by-case decisions about whether to endorse sitting Democratic lawmakers in 2018 or throw their weight behind other candidates.

“Individual groups across the country are upset and disappointed” after the temporary spending deal last week, Levin said. “I think they underestimate the importance of that grassroots energy for building the big blue wave they want to achieve.”

With a blue wave starting to build, Navin Nayak, the executive director of the Center for American Progress Action Fund, said he’s optimistic that Democrats can expand their numbers in 2018, simply based on a backlash to Trump and the GOP.

“I am still relatively optimistic for a few reasons, in that the biggest driver of vote choice is dislike for the other party,” he told Vox in a recent interview. “I’m hopeful that people will still be energized and it will be a huge advantage. It partly depends on what happens to DREAMers.”