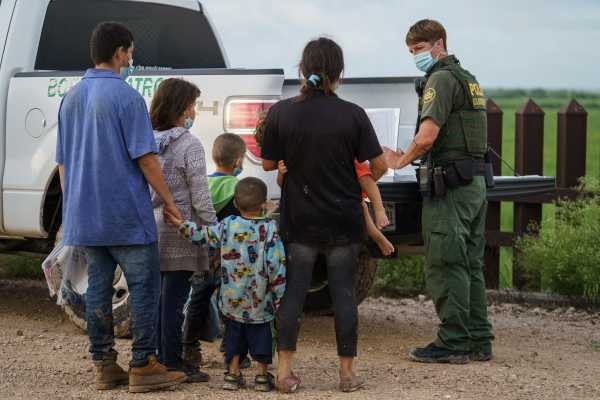 When President Joe Biden took office, many immigrant advocates were cautiously optimistic that the tide would be changing for their cause.

Unlike their predecessors, Biden and his officials don’t use language demonizing and dehumanizing migrants. They have vowed to address the root causes of migration in Central America, acknowledging that the problem doesn’t begin at the US-Mexico border.

They have undone some of the Trump administration’s most anti-immigrant policies, from his travel ban on several Muslim-majority countries to the so-called “Remain in Mexico” policy that required asylum seekers to stay in Mexico while awaiting their immigration court dates in the US.

And they have pushed legislation (albeit so far unsuccessfully) to legalize large swaths of the population of undocumented immigrants living in the US and reinvent a broken immigration system.

But there is mounting frustration among immigrant advocates that too little has changed well into Biden’s first year in office.

The administration has clung to pandemic-related border restrictions implemented by the Trump administration last year. And Biden has persisted in telling migrants “don’t come,” even though many of them are fleeing unlivable conditions ranging from gang violence to climate-related devastation.

The latest blows have been the administration’s recent announcements that it will resume rapidly deporting families at the US-Mexico border and that it intends to indefinitely maintain the pandemic-related border restrictions under Title 42, a section of the Public Health Service Act that allows the US government to temporarily block noncitizens from entering the US “when doing so is required in the interest of public health.”

Some advocates are now finding themselves in a more adversarial position than they had hoped to be.

The American Civil Liberties Union has been in closed-door negotiations with the Biden administration for months over Title 42, temporarily putting its lawsuit challenging the policy in federal court on hold. While it has secured the entry of thousands of vulnerable migrants to the US as a result of those negotiations, the ACLU announced Monday that they had reached an impasse and that the lawsuit seeking to end the policy would continue.

It was a signal that, to whatever extent advocates had given the Biden administration a grace period on immigration, it might be coming to an end.

The US continues to turn away the majority of migrants arriving at the southern border under Title 42, though there are exceptions for unaccompanied minors, some families from Central America with young children, and people who were sent back to Mexico to wait for their court hearings in the US.

The policy, implemented by then-President Donald Trump in March 2020, has allowed US immigration officials at the southern border to rapidly expel nearly 1 million migrants since the onset of the pandemic. Though scientists at the US Centers for Disease Control and Prevention (CDC) opposed the policy initially, arguing there was no legitimate public health rationale behind it, then-Vice President Mike Pence ordered the agency to follow through with it anyway.

Immigrant advocates and humanitarian groups say that the policy prevents migrants from exercising their right under US and international law to seek asylum. What’s more, public health experts have repeatedly said that migrants can be processed and admitted to the US safely. Indeed, this is already occurring on a small scale as some migrants are being tested for Covid-19 with private funds before they are allowed to cross the border.

“We are not cavalier about Covid or the new variants,” Gelernt said. “But it does not mean that with all the US government’s resources, it cannot safely process asylum seekers, as public health officials have been saying consistently for months. We allow many people to cross the border every day. But we are telling asylum seekers they cannot cross even with precautions.”

Yet the CDC nevertheless issued an updated order on Monday saying that the policy would remain in effect until the agency’s director determines that migrants no longer pose a “serious danger to the public health” in terms of spreading Covid-19.

Officials at the Department of Homeland Security, meanwhile, have continued to insist that they are merely deferring to public health experts at the CDC in opting to continue enforcing the policy. “Title 42 is not an immigration authority, but a public health authority, and its continued use is dictated by CDC and governed by the CDC’s analysis of public health factors,” DHS said in a statement Monday.

But keeping the order in place has serious humanitarian consequences for migrants trapped in Mexico.

As of June 2021, the advocacy group Human Rights First had tracked over 3,250 cases of asylum seekers and migrants kidnapped, raped, or attacked after being blocked or expelled to Mexico since Biden took office.

The Biden administration’s decision also plays into a damaging right-wing portrayal of migrants as carriers of disease. A recent Axios poll found that nearly 37 percent of unvaccinated Americans blame “foreign travelers in the US” for the rise in Covid-19 cases.

“The Biden administration and the CDC should be standing up for the truth, not helping to fuel that false, dangerous, and racist narrative,” Eleanor Acer, Human Rights First’s senior director for refugee protection, said in a statement.

In addition to keeping Title 42 in place, the Biden administration also announced last week that it is reviving the use of what’s called “expedited removal” against certain Central American families “who recently arrived at the southern border, cannot be expelled under Title 42, and do not have a legal basis to stay in the United States.”

Affected families can now be returned to their home countries in a matter of weeks, rather than the typical years it can take to resolve a full deportation case — and they don’t get a hearing before an immigration judge or the opportunity to consult a lawyer.

In a statement on Friday, DHS defended the decision to use expedited removal against families as a means to “securely manage our border” and as a step “toward our broader aim to realize safe and orderly immigration processing.”

“By placing into expedited removal families who cannot be expelled under Title 42, we are making clear that those who do not qualify to remain in the United States will be promptly removed,” it said.

But most immigration attorneys say expedited removal doesn’t give migrants the chance to fully articulate why they might be entitled to humanitarian protection, leading them to be unfairly turned away, sent back to danger in their home countries and barred from reentering the US for five years or more.

Here’s how it works: When a migrant shows up at the border without papers, a US Customs and Border Protection (CBP) officer will screen them to determine whether they might be eligible for humanitarian protection. They are looking for two things: 1) whether a migrant expresses an intention to apply for asylum, or 2) whether they fear potential persecution or torture if they return to their home country.

If they meet either one of those criteria, then the migrant will be referred to an asylum officer for another interview before they are allowed to present their case in immigration court. They will be informed about their rights and what the process entails and are typically given time to retain a lawyer and prepare their case, which includes gathering documents attesting to experiences that might make them eligible to remain in the US. An immigration judge will ultimately decide their fate, often years later.

But if a migrant doesn’t pass that initial screening by CBP, they will be detained and rapidly deported under expedited removal without any recourse. That means that if CBP fails to identify every migrant who might be eligible for humanitarian protection, some are bound to fall through the cracks and wrongfully be sent back home.

“Anytime you are imposing an expedited process, you run the risk that people’s due process rights will be infringed upon,” said Nicole Ramos, who works with asylum seekers in Tijuana, Mexico, as part of the legal aid group Al Otro Lado’s Border Rights Project.

Biden has been at odds with the immigrant advocacy community

Biden’s border policies have led at times to strained relations with the immigrant advocacy community. Gelernt said that the ACLU has had a constructive relationship with the Biden administration in reuniting migrant families who were separated by the Trump administration and in ending the Remain in Mexico policy, among other issues. But on Title 42, they have clashed.

“I’m not going to say that it’s completely adversarial,” he said. “I believe that the Biden administration is acting in good faith. But we don’t see eye to eye with them on all issues, and it will be adversarial on certain issues.”

But others in the advocacy community feel that Biden has outright failed them. Ramos, for example, said she hasn’t seen any meaningful shift in rhetoric.

“Maybe Joe Biden is not saying that Mexicans are drug dealers and rapists,” she said. “But the primary message to all migrants who are fleeing for their lives, are fleeing because of economic conditions that we largely created to make their homes uninhabitable, is ‘don’t come.’”

What’s more, she says that the administration dragged their feet on helping separated families return to the US, even though her organization had been asking the administration to allow them to enter the US immediately after Biden was inaugurated.

“Those families were ready to come into the US on day one, including someone who was in hiding in Mexico in active danger and another woman that had not seen her child in three years,” Ramos said.

The news on Title 42 and expedited removal are the latest disappointments. But Ramos said she never expected the Biden administration to be a partner to organizations like hers.