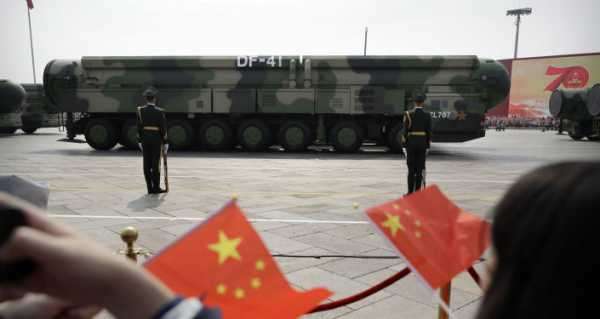 Following recent warnings by Pentagon officials about the rapid advances in China’s nuclear capability, since June, independent experts scouring obtained commercial satellite images have reported on what they believe is a missile silo construction boom in China’s remote western deserts.

The administration of US President Joe Biden has been warned to prepare to confront the growing nuclear challenge of China. Analysts warn that Beijing is possibly carrying out “the most significant expansion of its nuclear arsenal ever,” reported the Financial Times.

The recent statements echo concerns voiced in July by US State Department Spokesperson Ned Price, who said developments “suggest that the PRC’s nuclear arsenal will grow more quickly and to a higher level than perhaps previously anticipated.”

Biden extended the New Start Treaty with Russia just two weeks after his inauguration, with the two countries recently restarting a bilateral dialogue on strategic stability in the wake of the June summit between President Vladimir Putin and his US counterpart.

The upper stage of the newly upgraded DF-5B Chinese intercontinental ballistic missile, as seen after the military parade held in Beijing on September 3, 2015

However, analysts claim that evidence of China’s nuclear buildup warrants heightened attention. Since June, experts say they have discovered more than 200 missile silos under construction in China’s remote western deserts.

Their discovery was made using commercial satellite imagery, with higher resolution images of the site subsequently provided by Earth imaging company Planet. This followed a report earlier in the month that China appeared to be constructing 120 missile silos near Yumen in the province of Gansu.

Beijing is building 10 times as many silos for intercontinental ballistic missiles as it currently has in operation, suspect analysts cited by the outlet.

China is believed to have about 350 nuclear warheads, according to the Stockholm International Peace Research Institute. Furthermore, it’s claimed that the expansion exceeds the number of Russia’s silo-based intercontinental ballistic missile (ICBMs) and is estimated to equal half of the US’s total ICBM force.

Accordingly, experts believe that Beijing is deviating from decades of nuclear strategy based around minimum deterrence. Since its first atomic test in 1964, China has adhered to this policy, pledging to acquire no more nuclear capabilities than required for retaliating against an attack. Beijing also vowed never to use a nuclear weapons first, traditionally maintaining a large portion of its warheads in central storage, separate from their launchers.

Washington’s development of missile defence systems as well as its space-based military assets are perceived by China as a threat, underscore nuclear experts, as it could render their “minimum deterrence” second-strike capability useless.

Chinese participants are cited as having indicated in semi-official bilateral meetings that Beijing might boost its nuclear force to counter these US “threats.” Experts believe the recent discoveries suggest Beijing is gearing up to adopt a “launch on warning” stance. Under this scenario, China would potentially launch a counterstrike the instant it became aware that an attack against it was under way.

For the last three decades, the Chinese military has been undertaking a systematic modernisation of the People’s Liberation Army (PLA), which has acquired more mobile ICBMs, rendering nuclear weapons harder to detect for an adversary, claim US analysts.

In March, China’s leader Xi Jinping urged the military to “accelerate the creation of an enhanced strategic deterrent and joint warfighting systems.”

Zhao Tong, a nuclear policy expert at the Carnegie-Tsinghua Centre for Global Policy in Beijing, weighed in on the reported missile silo programme that has triggered Washington’s concerns, saying: