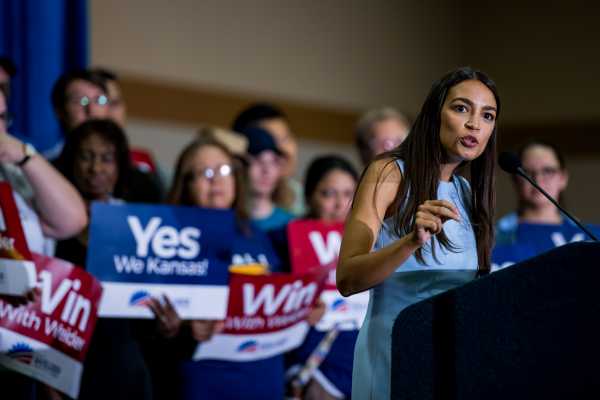 Republicans in Kansas have succeeded in recent years in codifying a conservative economic vision for the state, passing tax cuts so deep that officials had to slash social programs, to the point that the state Supreme Court mandated they boost funding for schools.

Now Kansas Republicans are worried Gov. Sam Brownback’s cuts will backfire on them in 2018. Despite the court-ordered increases, Kansas schools are still dramatically underfunded, and state Republicans have refused to implement Medicaid expansion.

The draconian policies have stirred a backlash, one that Democrats hope will buoy them to victory in at least two House races this fall and in the race for governor.

On Tuesday, primary voters will decide which Democrats to send on to the general election in November.

One candidate, Brent Welder, is even running on a progressive platform including Medicare-for-all. He hopes to prove that progressive populism can appeal to voters in Kansas.

“Working-class people are working-class people, whether it’s a schoolteacher in Kansas or a construction worker in New York,” he told Vox in a recent interview. “They know the economy is being rigged against them and the corruption in Washington needs to stop.”

Candidates like Welder are offering an alternative to the controversial conservative vision of the state’s Republican Party — and there’s plenty of grassroots energy on issues like education and health care in the state.

“School funding, above and beyond anything else, absolutely organized the grassroots,” said Leslie Mark, a leader at Indivisible Kansas City, a local chapter of the national progressive group.

Activists are also organizing around the issue of guns and Republicans restricting voting access. Mark says Kansas politics is a preview of Trump’s America.

“We’re about six years ahead of the country, and it’s a really scary look at the future for America,” she said. “It is hard to glue back ideas and institutions that you ripped apart.”

People like Mark are angry about the direction of Kansas politics — but will that anger be reflected at the ballot box?

Where Democrats hope to win

Democrats are fielding competitive candidates in the race for governor as well as two House races. The nominees in each race will be decided on Tuesday, and many of the races are likely to be competitive.

As far as House races, Democrats are eyeing a possible pickup opportunity in the Second Congressional District, which has an open seat. Former state Rep. Paul Davis is the lone Democratic candidate; he has decent name recognition after an unsuccessful bid for governor in 2014 and has been amassing a sizable war chest.

The fact that Davis has no competition will set him up nicely against whoever emerges from a crowded seven-person Republican field, but it’s still going to be tough: Cook rates the district R+10.

Go next door to the Third Congressional District and there’s much more of a competition on the Democratic side. Seven Democrats are running in this primary, but it’s especially competitive between MMA fighter Sharice Davids, former Bernie Sanders staffer Brent Welder, teacher Tom Niermann, and business executive Sylvia Williams.

Welder, in particular, is looking to test the theory that a Sanders-style progressive can win a primary in a conservative state. Since Sanders and rising progressive star Alexandria Ocasio-Cortez stumped for Welder a few weeks ago, he’s kicked up his fundraising game considerably, raising more than $100,000 in the days following the rally. A recent poll by Public Policy Polling found Welder leading Davids and Niermann, but it’s not a done deal yet.

In a recent interview, Welder attributed his success to talking about progressive policy ideas like Medicare-for-all, a $15 minimum wage, and more federal funding for education. He frequently mentions the number of small donations he’s receiving.

“When you start talking to people about things — about Medicare for everyone, a $15 minimum wage, and getting the corrupting influence out of elections … they’ve never heard a candidate in my district talking about these things,” Welder said. “These ideas are getting more and more popular.”

Welder and his Democratic competitors are hoping for the chance to unseat Rep. Kevin Yoder, who is looking like one of the more vulnerable incumbents this year. Cook rates the district R+4, but it went for Clinton in 2016, so there’s at least a chance it could flip this year.

There’s no doubt that Kansas and its neighboring Plains states such as Nebraska are thought of as solidly red. But it gets more nuanced, especially at the district level — and especially if you get people talking privately. Mark, the local Indivisible leader, says she knows of some Indivisible activists in other parts of the state who organize on closed Facebook groups.

“Is the energy there? Yes,” Mark said. “You’re never going to hear them by name; they have a closed Facebook group. They’re frickin’ afraid.”

The rural, western part of Kansas is far more conservative and Trump-friendly. But the state gets more purple around major metropolitan areas and in eastern areas like the Third District, which includes parts of Kansas City.

“I’m sure Trump is underwater there; we just don’t have district-level polling,” said Patrick Miller, a political science professor at the University of Kansas. Even so, Miller thinks that the moderate approach of Paul Davis is probably going to win over more voters than the progressivism of Welder. He thinks that, at least in Kansas, Democrats are going to need to appeal to independent voters to win.

“There’s a danger in embracing at least the symbols, if not the policy, of progressive Democrats,” Miller said. “That’s not the product that voters are looking to buy. It’s the flip side of the Rust Belt … whites with college degrees that cluster in suburbs are becoming more Democratic.”

Of course, Welder — like fellow progressives including Sanders and Ocasio-Cortez — argues that Democrats can win over working-class voters by embracing liberal ideas. Welder says he sees the energy there, and believes it can carry him to Washington.

“I think it’s bigger than I’ve ever seen in my life,” Welder said. “I would say the only other time I’ve seen anything similar and it wasn’t nearly as energetic … was when George W. Bush was president. I’ve been astounded by the grassroots energy now.”