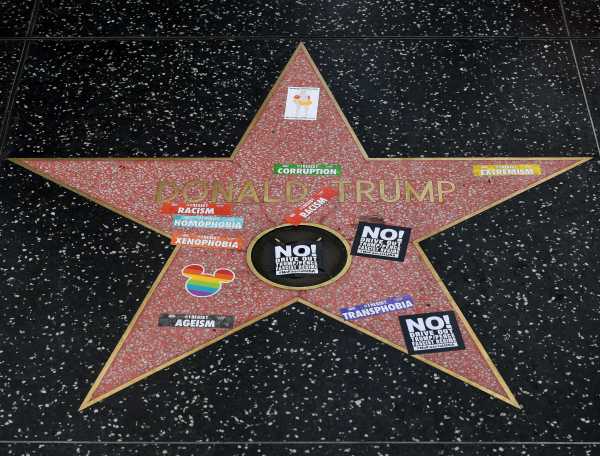 The city of West Hollywood wants President Donald Trump’s star off the Hollywood Walk of Fame.

The city council unanimously voted on Monday to urge Los Angeles and the Hollywood Chamber of Commerce to remove the star.

“The West Hollywood City Council did not pass the resolution because Donald Trump is a conservative or a Republican,” Mayor John Duran told CNN’s Cheri Mossburg. “Earning a star on the Hollywood Walk of Fame is an honor. When one belittles and attacks minorities, immigrants, Muslims, people with disabilities or women — the honor no longer exists.”

Because the Hollywood Walk of Fame isn’t within West Hollywood’s jurisdiction, the resolution won’t actually do anything.

Still, it’s the latest example of how Trump’s star on the Hollywood Walk of Fame has become a place for political opponents to express their disapproval with the president and his policies — including through vandalism.

Trump’s star has been on the Hollywood Walk of Fame, which honors entertainment luminaries, since 2007. According to Fast Company, he was chosen for the honor because of his role as producer of the Miss Universe pageant.

But since Trump entered politics, two people have destroyed his star, forcing the Hollywood Chamber of Commerce to replace it, and many others have vandalized it.

Trump’s star was first destroyed in October of 2016 by James Otis — a month before Trump was elected, about 20 days after an infamous video leaked of Trump saying he could “Grab [women] by the pussy” because he was famous, and months after Trump began his racist campaign against Mexicans and Muslims. Otis planned to auction off pieces of the star and donate the proceeds to the women who have accused Trump of sexually assaulting them, according to CBS2’s Kara Finnstrom.

On July 25, the star was completely destroyed by Austin Clay, who was wielding a pickaxe, according to CBS Los Angeles:

Other protests haven’t totally destroyed the star. A local Superman impersonator has witnessed people deface it, allow their dogs to relieve themselves on it, and make “obscene gestures” toward the star.

“People often stomp with anger on the star, others kick their heels over the star, and some spit. The last time, someone put a sticker over the star,” another impersonator, Francisco Javier, told CNN.

The star has had swastikas spray-painted on it, a tiny border wall built around it, and a mute symbol imposed on it. It’s been covered in Resist stickers. When a Trump supporter visiting Los Angeles in July 2017 cleaned the star, which was covered in graffiti, they tweeted: “Nothing but respect for MY president. #RaisedRight.” It inspired a meme.

The star is probably staying put

The Hollywood Chamber of Commerce is in charge of making decisions about the Walk of Fame. And for now, the group doesn’t plan to take Trump’s star off the walk.

“Once we receive a communication from the City of West Hollywood, it will be referred to our Executive Committee for consideration at their next meeting,” Chamber of Commerce president Leron Gubler said in a written statement to CNN. “As of now, there are no plans to remove any stars from the Hollywood Walk of Fame.”

Given that they have never before removed a star, despite requests from participants in the #MeToo movement to remove the stars of Billy Cosby, Harvey Weinstein, and Brett Ratner (who have all been accused of, tried or convicted for sexual assault), it’s unclear if they ever will take any action — against Trump or anyone else.