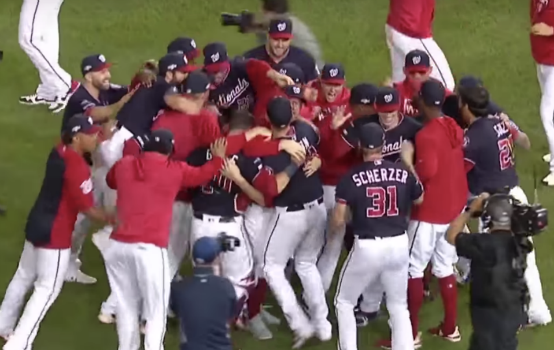 Washington, D.C. is the object of much American scorn, and certainly from conservatives. It is unaffectionately labeled “The Swamp” both for its humid conditions in summertime and its seemingly endless headliner corruption scandals. Politicians of both parties can always appeal to their constituencies by pledging to battle the crooks and special interest groups in Washington, even if they themselves are the former and in bed with the latter.

Thus the recent capturing of the National League pennant by the Washington Nationals, which will result in the franchise’s first trip to the World Series, might be viewed by some with derision. But that would be wrong. Americans should cheer on the Nationals, a team that’s brought some level of comity to a city that is otherwise seething with antipathy and division.

The story of the 2019 Nationals is an indelibly American one. Though the team was expected to perform well, by May 23, they held a record of 19-31, the second worst in the National League, and had just been swept by the over-performing New York Mets. Though injuries and an imploding bullpen bore much of the blame, many Nats fans called for the head of manager Dave Martinez. Yet General Manager Mike Rizzo, who since 2007 had taken the Nationals from the cellar of the National League to a perennial favorite to win the NL East, stuck with his man. And Martinez stuck with his players and his plan, which, quite simply, was to go 1-0 on any given day. Amazingly, for most of the rest of the season, the team was able to deliver, exceeding everyone’s expectations and gaining home field advantage in the NL wild card game against the Milwaukee Brewers.

But that was just the beginning of the Nationals’ come-from-behind. Down in the eighth inning against the Brewers and facing Josh Hader, one of the most dominant relievers in the game, they rallied behind 20-year-old Juan Soto’s single to win 4-3. Then, in the Division Series against the favored Los Angeles Dodgers, who had the best record in the National League, the Nats overcame the Dodgers’ home field advantage in a deciding game five, winning in extra innings off the bat of Howie Kendrick, a 36-year-old journeyman who most presumed was well beyond his best years.

That same Kendrick would also win the National League Championship Series’ (NLCS) most valuable player award for his clutch performances against the St. Louis Cardinals, who were also favored to beat the Nats. This time, perhaps energized by their amazing comebacks against two other good teams, the Nats made short work of the Cards, defeating them in four consecutive games behind some of the best starting pitching the postseason has ever witnessed. Pitchers Annibal Sanchez, Max Sherzer, Stephen Strasburg, and Patrick Corbin silenced the Cardinals’ bats. It was an act of defiant revenge for 2012, when a St. Louis squad with some of the same players in baseball came back from a 6-0 deficit against the Nats before a silenced crowd in D.C.

This year was a historic turnaround. Before 2019, the Nationals had never progressed beyond the first round of the playoffs, earning a reputation as the league’s premier exemplar in how to choke. The Montreal Expos, the team that moved to Washington in 2005 and became the Nationals, never made it to the World Series, their best chance in 1994 scuttled by a players’ strike. The last time a Washington team, the Senators, played championship ball was in 1933, and the last (and only) time it won a World Series was in 1924. As far as I know, there isn’t a single person alive who attended that game. Yet in the quintessential come-from-behind American story, the Nationals overcame seemingly insurmountable odds behind a team composed of superstars (Sherzer, Strasburg, Antony Rendon), has-beens (Kendrick, Ryan Zimmerman), and throw-aways unwanted by the rest of the league (Fernando Rodney, Geraldo Parra). Miraculously, they seem now to be an unstoppable force of athletic prowess, all their gears fully functioning in tandem, pounding every obstacle in their way into dust. Their slogan, which might as well be our nation’s in this acrimonious 2019, is “stay in the fight.”

I write of the Nationals which such fervor because I am one of those natives who cheered their arrival in 2005, happily transitioning my allegiance from the Braves of my youth to my new hometown heroes. It didn’t matter that for years they were one of the worst teams in baseball. It was a joy to go to the games, especially at RFK Stadium, where as an eight-year-old I had watched the Redskins mop the floor with the Atlanta Falcons on their way to their last Superbowl victory. Having the Nationals consistently lose in those early years in a way cemented the fanbase’s credentials—like the Brooklyn Dodgers, they were our bums.

For many Americans, including many who inhabit the District and its surrounding Virginia and Maryland counties, Washington is nowhere-land, a city of transplants with no affection for their adopted home. People come for politics or federal jobs, and then they leave to retire elsewhere. Not me and my family. My children are fourth-generation Northern Virginians. My grandfather ran a small business in Springfield. My father ran a small business in Woodbridge. This is my home, and I love it. Contra common perceptions, I am not the only one.

There is much to hate about the Washington Metropolitan Area, and I have written about plenty of it for TAC. Besides the corruption and partisan bickering, there’s the aforementioned transplants, the suburban sprawl, and the vast, empty, commercial spaces intended for government contractors. Growing up, I watched the last vestiges of the region’s Southern agricultural identity transformed into ugly, cookie-cutter, single-family homes and McMansions. Not far from my townhouse is one such McMansion, with gaudy statues out front, owned by a diplomat from a Gulf country, and it makes me squirm every time I see it.

All the same, this is the Northern Virginia that raised me. I am a product of its public education system, one of the best in the country, as is its public library system. I’ve traversed its beautiful parks; fished its many lakes, ponds, and streams; hunted in its forests. There are still “old towns,” not just in posh Alexandria, but in Vienna, Fairfax, Occoquan, and Warrenton, among others. To many of us Northern Virginians, this is not just a place to reside while earning a federal salary, but the place we inherited from our parents and what we will bequeath to our children. It is as much a part of America as the Rust Belt, the Bible Belt, and Appalachia.

I love my home town, warts and all. And boy are there a lot of warts lately, with impeachments, corruption scandals, and a level of partisan hatred that rivals the run-up to the Civil War. All the more reason to cheer on the Nats, which have brought together, however briefly and imperfectly, a city of conservatives and liberals. In Nationals Park in game four of the NLCS, Republicans and Democrats, atheists and Christians, and members of every race and ethnicity, cheered on their hometown team, and celebrated together when the Nats secured the 27th out. An old friend, one of the pastors at the same controversial church/school where Mike Pence’s wife teaches, was in attendance. So were former professional colleagues of mine, dyed-in-the-wool Democrats. At least for those few hours, the antipathy between them subsided.

Besides all this, the Nationals are especially meaningful to my family. My father, who after his service in the Vietnam War followed his parents to Northern Virginia and became a diehard Redskins and Baltimore Orioles fan, gladly switched allegiances to the Nats for their first season in 2005. My dad and I watched a lot of games together. After his last chemotherapy session in 2013, we talked about the Nats, and as has always seemed the case, their volatile bullpen. Not long thereafter, as I watched him die of cancer, I asked him to tell me stories from his remarkable life. He chose to talk about baseball—he had been a star catcher through high school. I can still picture him in his last days, the gleam in his eyes as he described, with childish wonder, the first time he hit a baseball. A few days ago, I witnessed my own four-year-old watch with similar awe as Nationals pitchers plowed through the Cardinals’ lineup.

Baseball, beloved by fathers who pass down its joys and sorrows to their sons, is America. And the Nationals, at least for this year, deserve to be America’s team.

Casey Chalk covers religion and other issues for The American Conservative and is a senior writer for Crisis Magazine. He has degrees in history and teaching from the University of Virginia, and a masters in theology from Christendom College.