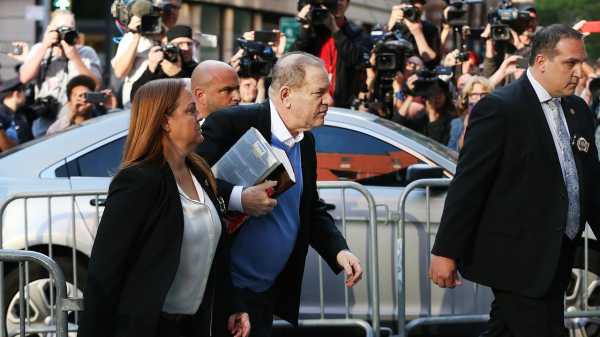 Manhattan’s Tribeca neighborhood used to be Harvey Weinstein’s territory. He conducted his ugly business in its glossy environs. His company’s offices were on Greenwich Street, above the Tribeca Grill, where he was known to hold court. When the annual Tribeca Film Festival descended, Weinstein was there, snaking through the glitterati. One day in March of 2015, Weinstein invited the model Ambra Battilana Gutierrez to his office for a morning meeting. That night, Gutierrez went to the New York Police Department’s First Precinct, off Varick Street, to tell officers that Weinstein had “lunged at her, groping her breasts, and attempting to put a hand up her skirt while she protested.” The next day, as Ronan Farrow reported last October, Gutierrez, wearing a wire, confronted Weinstein at the Tribeca Grand Hotel. The recording captured Weinstein, in a hotel hallway, pressing Gutierrez to go into his room to take a shower with him.

To see Weinstein turn himself in on Friday at the same precinct where Gutierrez made her report, in the same neighborhood where he caused so many women anguish and pain, was simply cathartic. For all the handwringing about the mob power of #MeToo, the fact is that most men who have assaulted women will not face criminal charges for doing so. In the months since reports about his behavior first appeared in The New Yorker and the Times, Weinstein had spent time hiding out in Arizona. On Thursday, when law-enforcement officials’ announced that an ongoing investigation by the N.Y.P.D. had resulted in sexual-assault charges against Weinstein, the news elicited a response similar to the “galvanizing shock” produced in April, when Bill Cosby was found guilty of three counts of sexual assault.

On Friday, just before 7:30 A.M., Weinstein emerged from a dark vehicle in front of the First Precinct Station House. There were dozens of photographers there, and local news outlets streamed the moment live on the Internet. Weinstein wore a light blue sweater and a black dinner jacket; his mouth alternated between a grimace and a smirk. Entering the precinct, Weinstein was a spectacle of smugness, as if trying to project the posture of an intellectual dissident. In his hands were three books, two of which have been identified. They were corny totems suggesting, respectively, artistic revolution and false persecution: Todd Purdum’s “Something Wonderful: Rodgers and Hammerstein’s Broadway Revolution,” and Richard Schickel’s biography of Elia Kazan, the Hollywood director who famously “named names” to the House Un-American Activities Committee, in 1952.

Weinstein was until recently a giant in the movie business, but the police have their theatre, too. After he turned himself in, Weinstein was made to do a perp walk, the queasy practice meant to emasculate the suspect and flex the prosecutor’s power. It is a public humiliation, a feast for the kinds of New York tabloids that Weinstein himself once manipulated so ruthlessly. Following his formal arrest, Weinstein, handcuffed, was led out of the precinct to his arraignment at the Manhattan Supreme Court. The books he walked in with had vanished. With his head hung low, Weinstein looked small, insignificant.

In the Manhattan Supreme Court, prosecutors charged him with two counts of rape and one count of a criminal sexual act. Reuters reported that Weinstein looked pale. He surrendered his passport and was released on bail; he will be outfitted with an ankle bracelet and will only be allowed to travel within New York and Connecticut. It remains to be seen whether a jury will convict—his arrest is not the end of the story. But it did induce a rush of feeling. “Today Harvey Weinstein will take his first step on his inevitable descent to hell. We, the women, finally have real hope for justice,” Asia Argento, an Italian film actress and director who has publicly accused Weinstein of sexual assault, tweeted. Elsewhere, the reporter Jodi Kantor, who along with Megan Twohey reported on Weinstein for the Times, asked, “Will the sight of Harvey Weinstein in handcuffs encourage more women to come forward/press charges?”