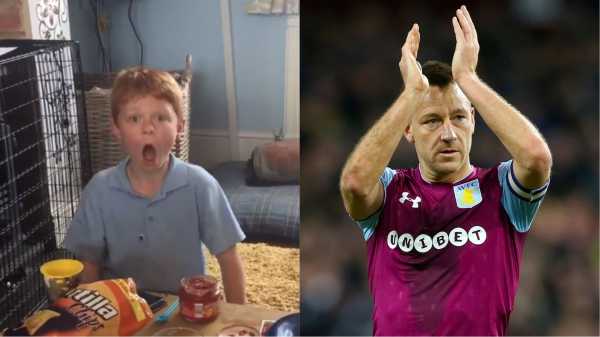 A nine-year-old Aston Villa fan has won a competition to be a mascot at Wembley for the Sky Bet Championship play-off final.

Haydn Farnell will walk out with Villa captain John Terry before the match against Fulham on Saturday, and his priceless reaction after being told by his dad has since gone viral.

Andy Farnell entered his son into the competition without him knowing, but it’s pretty clear Haydn was rather happy with the surprise.

The family, from Bromsgrove, are lifetime supporters, with Haydn going to his first game at the age of four.

Haydn will be hoping to act as a lucky charm for Villa on Saturday, as they attempt to return to the Premier League just two seasons after being relegated to the Championship.

“A return to the Premier League would be huge for the club and as a fan we’d get to see the best players coming to Villa park,” Andy, 35, told the Press Association.

Terry moved to Villa at the start of the season after 22 years at Chelsea, having joined them at youth level, and Andy said the fans have taken to their new captain readily.

“Terry coming in has helped evolve the winning mentality, the never-give-up spirit and the positive vibes that the team give out now,” said Andy. “He is a true pro within football and he should be seen as a true footballing professional.

“You would want him at any club in any capacity, so, yes, he needs to stay with us.”

The 37-year-old joined on a 12-month contract but Villa are hopeful he will trigger a mutual option for another one-year deal should they earn a return to the Premier League on Saturday.