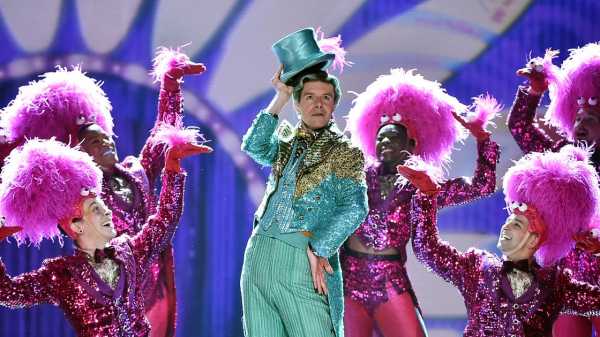 Pop quiz, SpongeBob. Which of the following took place at the seventy-second annual Tony Awards?

a) The legendary Glenda Jackson, after a three-decade absence from
Broadway, accepted a Tony for her role in “Three Tall
Women” and was immediately followed onstage by a puppet reindeer named Sven.

b) A four-legged fellow by the name of Squidward Q. Tentacles
performed a tap number with a chorus of sea anemones, after which an
announcer said, “Coming up—Mikhail Baryshnikov.”

c) A live goat was led down the aisle of Radio City Music Hall and
tried to get the attention of Nathan Lane, who waved it away as if he
was being offered a shrimp appetizer.

d) Robert De Niro, introducing Bruce Springsteen, had to be bleeped
out twice, and it was up to the good people at American Theatre magazine to tweet, “FYI, Robert De Niro just said ‘F*ck Trump.’
Twice.”

The answer, my Doolittles, is e) All of the Above. This year’s Tonys did not stint on weird juxtapositions, tuneful numbers, or memorable speeches. In short, it was actually fun to watch, unlike last year’s one-man showcase for Kevin Spacey, about whom the less is said the better. This time around, our hosts were two lovable dweebs with great pipes, Josh Groban and Sara Bareilles, opening the show on head-to-head grand pianos. They harmonized beautifully, appeared to be having a good time, and made no attempt to give the Tonys edge.

Speaking of nice nerds, the winner for Best Play was, unsurprisingly, “Harry Potter and the Cursed Child,” which also won a slew of design prizes and the directing award, for John Tiffany, who had the whole crowd sing “Happy Birthday to You” to his boyfriend. (Nice move, but wouldn’t it have been more effective for Patti LuPone to stand up and sing it herself?) The big upset was Best Revival of a Musical, which went to the scrappy little charmer “Once on This Island”—the one with the goat, not to mention two chickens—over “Carousel” and “My Fair Lady.”

It was a huge night for “The Band’s Visit,” the subtle-to-a-vanishing-point study of missed connections and cross-cultural communion; it won ten awards, including Best Musical, beating out three market-tested name brands: “Frozen,” “SpongeBob SquarePants,” and “Mean Girls.” Acting prizes went to its two leads, Tony Shalhoub and the luminous Katrina Lenk, who got to show America (or at least the slice of America that watches the Tonys) her transcendent performance of the song “Omar Sharif.” Who wrote that song? David Yazbek, whose win for Best Original Score was dispensed during a commercial break. The show’s book writer, Itamar Moses, got to give his speech live on camera, if only because his category included Tina Fey (“Mean Girls”).

But star power doesn’t always translate to Tony wins. Lindsay Mendez, who plays Carrie Pipperidge in “Carousel,” hopscotched over her co-star Renée Fleming and Diana Rigg (“My Fair Lady”) to win Best Featured Actress in a Musical. “When I moved to New York, I was told to change my last name from Mendez to Matthews or I wouldn’t work,” she said. “And I just want to say how proud I am to be part of a community that celebrates diversity and individuality.” The sentiment was echoed by Ari’el Stachel (“The Band’s Visit”), who dedicated his Best Featured Actor award to his parents. “I have avoided so many events with them, because for so many years of my life I pretended that I was not a Middle Eastern person,” he said, tearily. “After 9/11, it was very, very difficult for me. And so I concealed, and I missed so many special events with them. And they’re looking at me right now, and I can’t believe it.”

In the past few years, the Tony ceremony has held out Broadway as a bastion of inclusion and acceptance, and its politics this time were alternately loving and tough. There were De Niro’s F-bombs, of course, but also Andrew Garfield (“Angels in America”), the winner of Best Leading Actor in a Play, declaring, “We are all sacred and we all belong, so let’s all bake a cake for everyone who wants a cake to be baked.” Marianne Elliott’s production of “Angels in America” won Best Revival of a Play, which gave its author, Tony Kushner, the chance to say, “I want to talk briefly.” Remarkably, he did, and yet managed to remind the audience about the midterm elections and wish a happy birthday to Judy Garland.

Shalhoub, accepting Best Leading Actor in a Musical, went the other direction, saying, “I know you’re all tired, so I’m going to make this as long as I possibly can.” Then he choked up as he spoke of his father’s arrival at Ellis Island from Lebanon, in 1920. John Leguizamo, who received a special Tony for “Latin History for Morons,” recalled how he forged his own identity onstage after getting kicked out of Lee Strasberg’s acting class. (“He died that night. No, seriously, my acting killed Strasberg.”) But the evening’s most heart-tugging moment came courtesy of the kids from the Marjory Stoneman Douglas High School drama club, who made a surprise appearance to sing “Seasons of Love.” (Their teacher Melody Herzfeld, who sheltered them during the shooting, in February, received the honor for theatre education.) I’ve said it before and I’ll say it again: don’t mess with theatre kids.