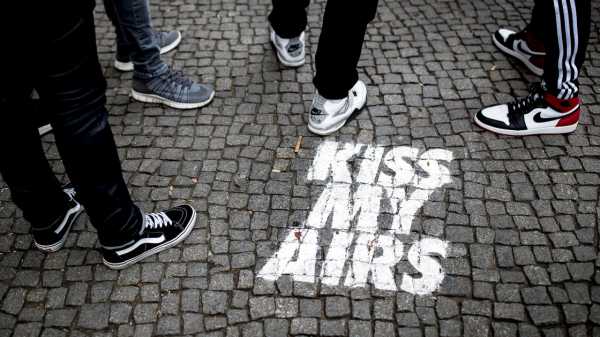 Before the first Air Jordan was released, in 1985, N.B.A. players generally wore bland shoes in black or white with perhaps a splash of color. The league’s idea—shoe color was in the rule book—was to emphasize team unity over individual stars. But, at a Madison Square Garden preseason game, Nike put its freshly signed rookie, Michael Jordan, into a pair of black-and-red shoes anyway. The N.B.A. informed Jordan and Nike that, because the shoes clashed with those of his teammates, he couldn’t wear them in games. Nike’s advertising firm, Chiat/Day, promptly created an ad to capitalize on the infamy. In the spot, the camera begins at the top of Jordan’s bald head and pans down. “On October 15th, Nike created a revolutionary new basketball shoe,” a voice intones. The camera reaches his feet. “On October 18th, the N.B.A. threw them out of the game.” Black bars clang onto his shoes. Then, the money quote: “Fortunately, the N.B.A. can’t keep you from wearing them. Air Jordans. From Nike.”

“Unbanned: the Legend of AJ1,” a documentary that débuted at the Tribeca Film Festival and is scheduled for a wider release next month, examines the legacy of that first Air Jordan. Produced by Los York Films, a division of Los York, which is Jordan Brand’s main advertising agency, the film is a mash note stacked with interviews from rappers and actors and fashion people. Almost all profess their deep love for Air Jordans and attempt to convey, with mixed success, how big a deal the shoes were when they débuted—an initial impact magnified by the “banned” myth. (The shoes were never actually banned.) “You have to respect how powerful that was to culture and to the world,” a wide-eyed Jerrod Carmichael says. Before Jordan, Nike was struggling to break into the basketball market. The ad featuring Jordan heralded a sneaker empire, a cultural landmark, and a sizable fortune for His Airness.

But, after three decades, the Air Jordan has achieved the ubiquity it once rebelled against, and the shoes are slowly losing their cultural sway. There’s little tragedy in a large corporation’s declining market share, but there’s a lot of fascination in watching the fissuring of a hegemony. Sneaker hype has been shifting away from basketball shoes, spurred in part by the streetwear impresario (and frequent Nike collaborator) Ronnie Fieg and his work with the running-shoe brands New Balance and Asics. The luxury houses have taken that shift toward an ironic extreme, pumping out swollen runners like the Balenciaga Triple S, a shoe that, per Jamie Lauren Keiles, “expresses the idea of a sneaker without ever becoming one.” At the low end of the market, teen-agers are gravitating toward cheaper shoes from Vans or fresher models from Adidas, such as the Ultra Boost. Last year, Adidas overtook Jordan Brand in North American sales. Though Nike still retains the top spot, and Jordan’s third place is still worth hundreds of millions in revenue, the ascendance of Adidas has prompted a harried bit of soul-searching.

At a talk in Portland, Orgeon, last year, Larry Miller, the president of Jordan Brand, who figures prominently in “Unbanned,” acknowledged how the declining popularity of the Air Jordan weighs on the company’s future. “How do we continue to make the brand relevant with today’s consumers?” he asked. “The further Michael gets from the basketball court, the more challenging it is.” That relevance is, in part, measured in the aftermarket, where coveted shoes can be resold at many times their original value. Josh Luber, the founder of the sneaker-resale site StockX, noted last June that, since 2015, Jordan had given up half of its near-monopoly on aftermarket sales to Kanye West’s Yeezys and other offerings from Adidas.

For years, that market, for people who want to buy shoes they couldn’t get upon their initial release, has been warped by hordes of fans lining up outside physical stores or crashing Web sites to buy Air Jordans and other “special editions” released to profit off an increasingly mainstream collector culture. That manufactured, outsized desire attracted a growing corps of speculators. Now programmers create bots that will extract sneakers from a retailer’s Web site with a trader’s speed. The shoes have become a commodity traded as easily as gold or oil, and high resale prices demand more supply. Jordan Brand began selling more retros, and, to reclaim market share from resellers, began restocking the releases that sold out in stores.

That strategy has backfired: On resale sites like StockX, Flight Club, and Stadium Goods, many retro Jordan models command scarcely more than their retail prices, if they’re not still sitting, discounted, on physical and digital store shelves. Like OPEC’s restricting of crude supply after American shale oil flooded global markets, Nike and Jordan Brand executives have begun mentioning on earnings calls that they’re cutting back on retro-Jordan availability.

To that end, the Air Jordan 1 is a convenient site for observing Nike’s discontent. (In an ironic illustration of the problem at hand, “Unbanned” opens with a giant, C.G.I.-rendered pile of AJ1s.) Whereas other models in the Air Jordan lineage might have more robust legends—the XI made an appearance in “Space Jam” and was responsible for several years’ worth of Black Friday riot footage, as desperate shoppers sought to secure pairs as Christmas presents—the AJ1 is the tentpole. It’s the only Air Jordan model that’s always being brought back, every year, in one old-school colorway or another. But just chucking shoes out there isn’t enough anymore, so Jordan has begun folding the shoe in on itself: recent models, in a bid to recreate that 1985 excitement, combine two of the AJ1’s first Bulls-themed colorways. A so-called Top 3 version, in 2016, mashed that combination with a third colorway, the Royal Blue pair that Jordan wore in early ads. It’s a sneaker-marketing Voltron.

Coming to the rescue is Virgil Abloh, the Off-White designer, recently installed Louis Vuitton menswear director, and bringer of salvation for brands afraid of stodge. When Nike unveiled its collaboration with Abloh, the Ten, the AJ1 was the only Jordan shoe in the mix of other mainstays: the Air Force 1 and the Air Max 90, for instance. Abloh, who loves the work of Marcel Duchamp, once told the German fashion magazine 032c that “Duchamp is my lawyer,” a reference to their shared practice of reframing quotidian objects. For Jordan Brand, Abloh took a blade to the AJ1—an act meant to unleash something that color and material changes cannot. The designer injects youth and excitement into every project he touches, from IKEA to Sunglass Hut, and, in his hands, the AJ1 became another aging legend coming in for a bit of plastic surgery. “The X-Acto-knife work makes it look half made, like you’re seeing a sample,” he said last year, accepting an award for Shoe of the Year given to his AJI by Footwear News. The release sold out, as so many of his collaborations do, and its resale price sits in the thousands.

Even more radical than Abloh’s work is Jordan Brand’s Reimagined Collection, which let a group of female designers reshape the AJ1. (Nike, which is seeking to expand its market share among women in the U.S., announced the Reimagined shoes just before stories began breaking about the company’s misogynistic corporate culture.) The Rebel wraps the laces across the ankle like ivy; other models rip out chunks wholesale, or run zippers up the tongue, or stack the whole shebang on top of a stocky ripple sole. The stretching and cutting speak to Jordan Brand’s extreme attempts to breathe new life into its oldest offering. Doubling down, Jordan Brand dropped a Rebel in the Top 3 colorway.

In the mid-nineties, a spate of stories ran in the national press about young men being robbed and murdered for their Jordans. The classic of the genre is Sports Illustrated’s 1990 story “Senseless,” which was promoted on the cover with copy that read, “Your Sneakers or Your Life?” The article opens with a tragic news clipping: “Charged with first-degree murder was James David Martin, 17, a basketball buddy who allegedly took Thomas’s two-week-old Air Jordan basketball shoes and left Thomas's barefoot body in the woods near school.” But it also examines the way that “a fantasy-fueled market for luxury items in the economically blasted inner cities” mashed up against “inequality in race and class.” Nike’s marketing was too good; Jordans were too desirable.

In “Unbanned,” Public Enemy’s Chuck D observes that “once something hit a critical stage of consumption to disenfranchised neighborhoods, and the price/market was sky-high, it created issues for young people who wanted these things but families couldn’t afford it.” It’s a paradox that Nike and Jordan Brand need: if the shoes are too widely available, sales growth suffers because they’ve lost their cachet, and, if supply is too tight, the shoes become too expensive and dangerous and inaccessible for regular consumers. Last month, the New York Post ran a pair of stories about a sneaker robbery in Queens over what turned out to be a counterfeit pair of Jordans. The first story accompanied a surveillance video that showed three young men—all appearing to wear Jordans—subduing a fourth and wrestling the shoes off his feet. (He wasn’t seriously injured.) The second featured them, minutes later, going to a resale shop to pawn the shoes. The sneakers appeared to be a pair of Off-White AJ1s. Had they been real, they would have netted the thieves two thousand dollars.

It’s hard to tell whether this was good news for the Air Jordan.