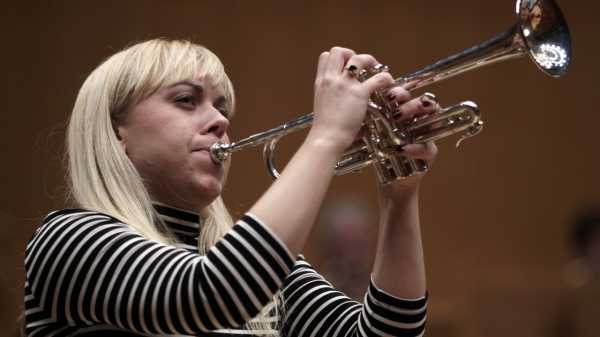 With the New York Philharmonic taking the weekend off at Lincoln Center,
New York concertgoers seeking the comfort of massed orchestral sound
should consider two other entertainments, both of which take place on
Saturday evening—and each of which features a magnetic female star.

Carnegie Hall’s main offering comes from an old friend, the Orpheus
Chamber Orchestra. As the group always plays without a conductor, its natural virtuosity is
often enhanced by the artistry of a distinctive guest soloist; this time
around it will be Tine Thing Helseth, the young Norwegian trumpeter
who’s one of the very few exponents of her instrument to enjoy a
successful solo career. She’ll play concertos by Bach and Albinoni in a
program that also offers fetching music by Rossini and Haydn, and
Mozart’s towering Symphony No. 40 in G Minor.

It’s very tempting to compare Helseth with the pianist Leif Ove Andsnes,
her distinguished countryman—perhaps a predilection for clean lines,
effortless dexterity, and a disarmingly natural manner of artistic
expression is a national trait. Neither artist needs to bray to be heard, but Helseth’s tone has a dose of sweetness that adds
to her coolly charismatic presence. Here’s Helseth performing the second
movement of Bach’s Trumpet Concerto in D Major, with the Norwegian Radio
Orchestra:

Over at BRIC Arts Media House, in Brooklyn, a different mood prevails:
the oozing of German Romanticism into postmodern Expressionism, as
captured in Reinbert de Leeuw’s “Im Wunderschönen Monat Mai,” which will
be performed by the Knights Chamber
Orchestra and its guest, the actress and singer Katja Herbers. For American
composers, writing music in the style of neo-Romanticism means emulating
the lyricism and emotional accessibility of the great works of the
nineteenth century; for European modernists like de Leeuw, the renowned
Dutch conductor and composer, it offers a chance to look back at their
Romantic heritage—the songs, for example, of Schubert and
Schumann—through a glass darkly, with a raw, art-brut effect. Herbers,
known in this country for her work in the TV program “The Americans,” is
the daughter of the violinist Vera Beths, whose equal mastery of both
contemporary and eighteenth-century styles was a pivotal inspiration to
the string players Colin and Eric Jacobsen, the founders of the Knights.
Here’s Herbers, in all her gritty glory, tearing into de Leeuw’s
treatment of “Ich Grolle Nicht” (“I Bear No Grudge”), from Schumann’s
“Dichterliebe”:

Two recitals continue the week’s obsession with Romanticism, also on the
same night, February 6th. If you want to listen to
“Dichterliebe”
as it was meant to be heard, then catch the Carnegie Hall recital of the
formidable German baritone Matthias Goerne, who will undertake a
magisterial program of high Romantic repertory—also featuring songs by
Berg, Brahms, and Wolf—with the dazzling young Russian pianist Daniil
Trifonov. At Carnegie’s Weill Recital Hall, Goerne and Trifonov get some
competition from the Telegraph
Quartet, one of the finest of the emerging string quartets, as it traces the
progression of late Romanticism into modernism and beyond. Telegraph
will perform Schoenberg’s String Quartet No. 1 in D
Minor;
the Quartet No. 1 by the distinguished American master Leon Kirchner,
who studied with Schoenberg; and the Quartet No. 3, “Wave Upon Wave,” a
world-première work by the contemporary composer Robert Sirota, who
studied with Kirchner.