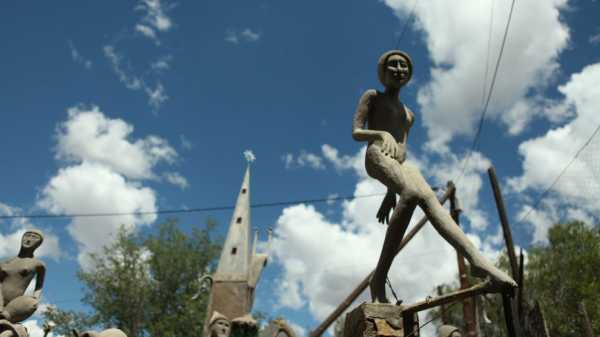 Nieu-Bethesda is far away from most places. It was the last village in
South Africa to get electricity, in 1991, and it still doesn’t have a
gas station or an A.T.M. Ringed by mountains, it feels like the sort of
place where compasses would stop working, where Victorian-era explorers
would lay down their pith helmets and die for no good reason. When I
first arrived there, after a long drive through the Karoo desert, I was
spooked by the village’s close, hallucinatory green. I had always
thought of willows as resolutely midsize trees, but the ones lining the
dirt road into Nieu-Bethesda were monumental. They took up whole
gardens, draped themselves over roofs and ornamental ponds. When the
wind blew through them, it sounded like fire. My sense of the village
changed with the light: it was a haven, a prison, a haven again. The
horses shied at things I couldn’t see, and every afternoon the dogs
started barking all at once, at nothing.

The last time that Nieu-Bethesda could reasonably be described as
thriving was about a hundred years ago. There is no real reason to go
there, except to see the Owl House, which was built by the reclusive
artist Helen Martins and maintained as a museum after her death. As
Martins’s relative fame has grown over the years, traffic to the village
has steadily increased. Tourists like me come for the weekend, visit the
Owl House, sigh at the mountains and the silence, and leave with
glass-eyed owl statuettes, or perhaps little owl refrigerator magnets.
Martins’s work and life have become the subject of books, films,
dissertations, plays, and cheery tourist brochures that determinedly
downplay the more distressing elements of her biography.

Martins was born in 1897, at a time when Nieu-Bethesda was still the
busy center of a farming community. She was the last of ten children.
Her Afrikaans-speaking parents named her after a sister who had died,
but they called her Joodjie (“little Jew”) because of her dark hair.
Very clever and very pretty, she trained as a teacher and married a man
from the village, another teacher. They left. Her husband formed a
theatre company, and they travelled around the country putting on
amateur productions. The marriage was not good; the dramatist was
unfaithful, and there are rumors that he coerced Martins into having two
abortions during their six years together, a detail often used to
explain all the babies that feature in her work. The couple divorced in
1926. Five years later, when Martins was thirty, she came back to the
house she was born in to look after her parents.

Martins loved her mother, and was devastated by her death, from breast
cancer, in 1941. Her relationship with her father was, as they say,
troubled. Much of what is known about Martins is clouded by speculation,
a function of her isolation, her habit of burning letters, and her own
self-mythologizing. The cloud is heaviest over this part of her life.
When I visited the Owl house, three people informed me, unprompted, that
there was no truth whatsoever to the rumor that Martins was a victim of
incest; nevertheless, the story persists. The father, Piet Martins, was
by all accounts a vindictive and bitter man. He had a big black Bible in
which he wrote the names of his enemies next to particularly vengeful
verses. After Martins’s mother died, when her father was sick and
getting sicker, from stomach cancer, she banished him to an outside
room, painted the walls black, put a bed in one corner and a crouching
black stove in the other, and scratched “The Lion’s Den” into the
concrete stairs leading up to the door. I was told that she and her
father never exchanged another word in the four years it took him to
die.

Karoo houses do not, in general, admit a lot of light. They are built to
be cool in summer and warm in winter, with deep verandas and
strategically placed windows. The floors often feel cold underfoot, and
at night the darkness is total. Martins spent fourteen years in a house
like that, with the sun setting in front of her every day. To light all
the rooms properly would have required hundreds of candles and paraffin
lamps. In any case, she had something more ambitious in mind. She was
not rich, but she was still a white woman in apartheid-era South Africa,
which meant that she could depend on the ready availability of black
labor. With the paid help of a succession of workers from the
neighboring sheep farms, she started removing sections of the walls in
her house and replacing them with panes of colored cathedral glass.
Martins seems to have needed light like she needed air, and, with a
great deal of effort by her and her collaborators, she got it. The word
“effort” is important here: Martins never referred to herself as an
artist, or to her house as art. She had no formal training, and neither
did any of the men who assisted her. She called what they did work, and
they did it for forty years.

It must have felt like a miracle to wring light out of a house like
that, to make the rooms glow luminescent green and red, the light
bouncing first off mirrors, then off the crushed glass that Martins
stuck to the walls and ceilings. She ground it up in a coffee grinder,
all that glass, and stored it in jars, one for each color. There are
stories of Martins standing with her first assistant, Jonas Adams,
throwing glass up at the freshly painted ceiling and laughing as it fell
around her. Adams said that he closed his eyes, because he was scared
for them, but that she kept hers open. There is dust on the glass walls
now, and some of Martins’s mosaics have worn away, but the over-all
effect is still astonishing. Like the light in the Donald Justice
poem,
it comes from everywhere and nowhere at once. You feel how happy it must
have made her.

But the Owl House can turn vicious with a suddenness that feels like
missing a step in the dark. It is full of arrestingly scary objects,
things that are hard to imagine living with. In the Powder Room, there
is a sculpture that Martins called the Little Devil, a vaguely
person-shaped sack with two legs protruding from it. One has a shoed
human foot at the end of it, the other a hoof. There are tables that
have coiled snakes for bases. There is a tea cozy in the kitchen with a
monkeyish-humanish head on top, and probably whoever gave it to Martins
thought it was cute, but it sits there like something out of hell. In
another room, there is a twin bed with two dolls lying in it face up,
staring at the ceiling; Martins referred to it as the Honeymoon Room.

The house, which came into being as a symptom of Martins’s loneliness
and darkness, became the cause of those things as well. The white, conservative
Christians in town thought that she was a witch, and whispered about her
when she stepped out into the street. So she went out less. After she
and her assistants finished the house, they started on a sculpture
garden, known as the Camel Yard. Martins’s closest collaborator during
this time was Koos Malgas, a “colored” former sheep shearer. Martins
would draw an idea she had, they would talk it over together, and then
Malgas would construct the wire frame over which the concrete was slowly
layered.

Much of the Camel Yard has a joyful, processional feel. It is crowded
with concrete statues—of birds, camels, prophets, giraffes, donkeys,
mermaids, babies, men who look like animals, women who look like
angels—all of them with hands raised, facing the direction that Martins
thought was east, toward Mecca. Martins grew Queen of the Night cacti
all over the garden, and for a few weeks every year they explode with
creamy-white flowers and light up the night. A wire-worked sign overhead
reads, “This Is My World.” Like the house, though, the garden has a
nasty edge. The peacocks’ tails are decorated with brutal shards of
glass. The statue representing Martins has its little toes missing. In
the Garden of Debauchery, there is a man with a rooster’s head in the
process of unbuttoning his pants, a joke lacking any trace of humor.

A woman who was closely involved with the preservation of the Owl House
and who knew Martins’s story well told me that “she killed herself
because she was depressed, not because she couldn’t see. People don’t
kill themselves because of their eyes.” But depression and darkness,
physical darkness, seem to have been the same thing for Martins. After
all those years of crushing up glass and throwing it into the air, she
started to go blind. In a letter to a close friend just before she died,
she wrote, “I cannot keep my eyes open, not for anything—should the
doctor advise that I should leave off working, then I shall die; and
directly.” She killed herself in the winter of 1976, at the time of year
when the light is darkest, hitting the mountains at the meanest angle.
Her method of suicide was to swallow caustic soda, the final bit of
cruelty she directed toward herself. Among the instructions she left was
a letter to the police informing them that she had given Malgas her
radio, because she knew that they would assume he had stolen it. She
took three days to die.

In Hebrew and Aramaic, the word “Bethesda” translates as “house of
grace” or “house of mercy.” It can also mean “shame” or “disgrace.” In
the Gospel of John, the pool of Bethesda is where sick people go to be
healed. The aptness of her village’s name couldn’t have escaped Martins.
You need to be sick before you are healed; grace means something only if
you know about disgrace; there is no light without the dark. That she
couldn’t or wouldn’t leave the tiny village that often made her so
unhappy is the reason that the Owl House exists. How you see it can
change with the light. By the time I left Nieu-Bethesda, the willow
trees seemed to me to be of completely normal size, and I was sure all
the dogs were barking at something.