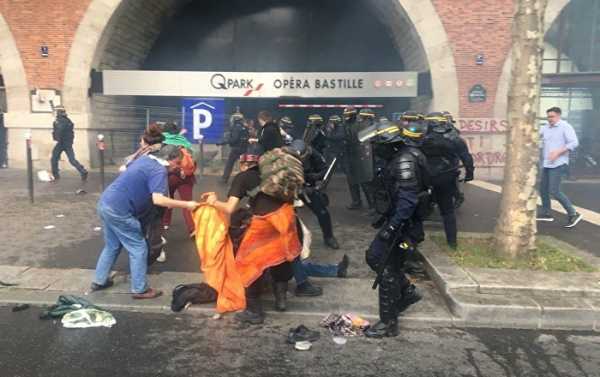 However, the protests turned into violent clashes and the police resorted to brutality, detaining protesters and beating them to the ground with batons. Some of the violence is highlighted below.

Another video, published by TV channel ODN, shows police officers beating a protester who is already on the ground.

The police used a water cannon against the protesters wreaking havoc on the streets of Paris.

The protesters brought in a papier mache effigy head of Macron (the resemblance is striking) and burned it atop a shopping cart.

And here is a short collection of some of the most dramatic moments of the protest and the crackdown.

French public service workers have gone on strike in protest of the government’s plan to cut 120,000 jobs by 2022. The protesters are also demanding higher wages and have denounced the increasing use of short-term contracts in public services.

The police estimate that some 15,000 people engaged in demonstrations in Paris, with smaller groups gathering in other cities.

According to the Sunday Express, two shops and one bus stop were destroyed and 20 protesters were arrested during the clashes.