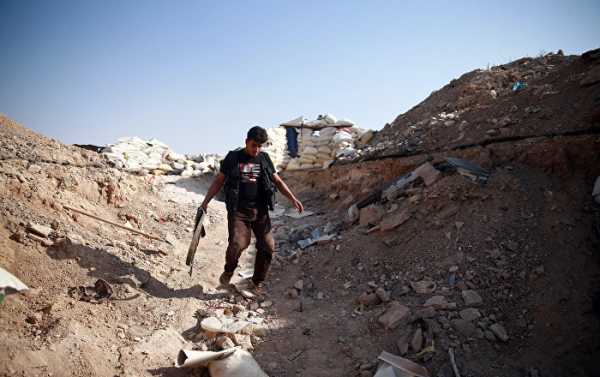 The US still cannot reconcile itself with the military success of the Syrian Arab Army and Russia’s recent diplomatic achievements in Sochi, former Syrian diplomat Bassam Abu Abdallah has told Sputnik, commenting on Washington’s attempt to use the chemical weapons issue to exert pressure on Damascus, Moscow.

“Daesh [ISIS/ISIL] and al-Nusra Front has been nearly completely defeated,” the diplomat said dubbing the groups as “the US’ hands in Syria.” “At the same time, we see that the Syrian National Dialogue Congress in Sochi proved successful. The international community, led by the UN Secretary General, welcomed this important step to solve the Syrian crisis.”

On Monday, US Ambassador to the UN Nikki Haley accused Russia of “shielding” Damascus on the issue of the alleged use of chemical weapons in Syria.

​”It’s a true tragedy that Russia has sent us back to square one in the effort to end chemical weapons use in Syria,” Haley said.

For his part, Russian Envoy to the United Nations Vassily Nebenzia reminded the UN Security Council that the Organization for the Prohibition of Chemical Weapons (OPCW) confirmed that the chemical stockpiles of Syrian government forces had been completely destroyed by June 2014.

Back in 2013, the Russia-brokered decision to eliminate the Syrian chemical arsenal saved the country from a potential US attack under former President Barack Obama.

Moscow has repeatedly denied Washington’s accusations of throwing sand into the gears of the investigation into the use of chemical arms in Syria. Quite the contrary, Russia insists on a full, inclusive probe into chemical attacks, Kremlin spokesman Dmitry Peskov said in late January.

“You know that our positions diametrically diverge here. We do not agree with the US position,” Peskov highlighted.

On February 2, Mattis announced that the United States was working with its partners on the ground in Syria to look into reports of alleged chemical arms use in Eastern Ghouta. However, according to Politico, the US secretary of defense admitted that there has been no evidence of the use of the deadly gas yet.

Earlier, reports emerged about the supposed chlorine attacks in Saraqeb, in Idlib and in Douma, in Eastern Ghouta.

According to Abu Abdallah, the US sources in Idlib and Eastern Ghouta raise serious questions.

“The United States has made itself look bad when US Secretary of Defense John Mattis said that they receive information from their partners on the ground. But who are they? In Idlib, it’s al-Qaeda. Does it mean [the terrorist organization] is a US partner? In Eastern Ghouta the fighting is conducted by Jaish al-Islam, groups close to al-Nusra Front, the al-Rahman Legion and others. So, are all of them US partners on the ground? Is it possible to seriously take US accusations into account if they use such sources?” the former Syrian diplomat asked.

He warned that the chemical weapons issue may one day translate into US military strikes against Syria.

Abu Abdallah’s concerns are not groundless, given Washington’s Tomahawk attack on the Syrian military airfield in Ash Shayrat in April 2017 following the alleged chemical attack in Syria’s village of Khan Shaykhun, Idlib province. The Trump administration made the decision to attack the positions of the SAA despite no evidence of the Syrian government forces involvement in the incident had been presented.

At the same time, the matter is unlikely to become the focus of special attention from the UN, as the US is exploiting it just to blackmail Damascus, the former diplomat noted.

Abu Abdallah does not exclude tough and excessive measures towards Syria on the part of Washington. To illustrate his point the Syrian specialist referred to the much discussed Kremlin Report.

However, he believes that “this indicates the weakness of the Americans.”

“In the Middle East and other parts of the world, the Americans are losing their positions and facing new competitors, primarily Russia and China. However, all America can do is to respond with sanctions lists, pressure and actions of terrorist groups,” Abu Abdallah concluded.