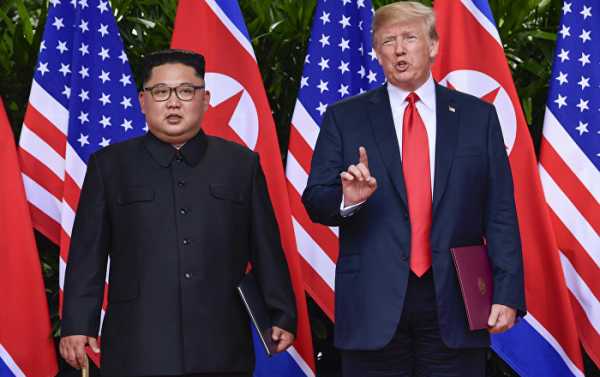 The landmark June meeting between US President Donald Trump and his North Korean counterpart Kim Jong-un in Singapore is viewed by Tehran as just a publicity stunt following the US withdrawal from 2015 nuclear accord.

“The US administration’s performance these years has led the country to be considered untrustworthy and unreliable around the world, one that does not meet any of its obligations,” Rouhani was quoted by the Islamic Republic News Agency (IRNA) as telling Ri on Wednesday.

He added that “in the current situation, friendly countries should develop their relations and cooperation, mentioning the “close views” the two countries have traditionally held on many issues.

During the meeting with the Iranian president, Ri described Washington’s pullout from the 2015 nuclear accord and reinstatement of sanctions on Tehran as an “action against international rules and regulations.”

“North Korea’s strategic policy is to deepen relations with the Islamic Republic of Iran and confront unilateralism,” he added.

Earlier this week, Iran dismissed a last-minute offer from President Trump for talks as worthless and “a humiliation” after he re-imposed sanctions on Tehran despite protests from Washington’s main European allies, Britain, France and Germany, as well as Russia and China.

North Korea’s top diplomat arrived in Tehran after attending a security conference in Singapore where he had bickered with US Secretary of State Mike Pompeo over the slow implementation of an agreement reached during the historic US-North Korean summit in June.

During the meeting Trump and Kim pledged to work towards North Korea’s denuclearization.

On Thursday, North Korea’s Foreign Ministry said that progress on denuclearization promises made during the US-North Korea summit in June cannot be expected if the United States adheres to “old scenarios” that have failed.

The state-run KCNA quoted a ministry spokesman as saying that Pyongyang’s commitment to implement the promises made at the summit has not changed.