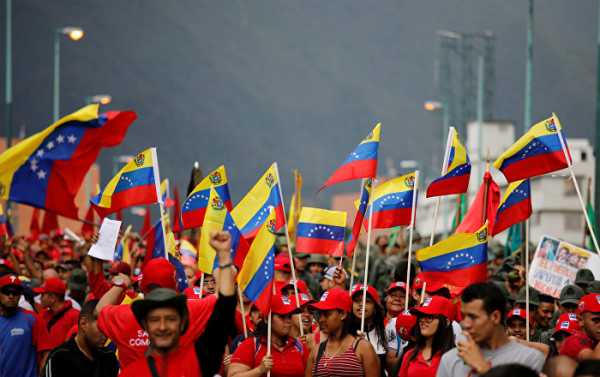 MOSCOW (Sputnik) – Venezuelan National Assembly President Juan Guaido declared himself the country’s interim president on Wednesday, with an intention to lead the transitional government until the next election.

The United States formally recognized Guaido and demanded that Venezuelan President Nicolas Maduro, whom it does not consider to be the legitimate head of state, should prevent violent actions against the opposition. Speaking to his supporters, Maduro declared himself the constitutional president, and called the opposition leader “the US puppet.”

Information about political instability in Venezuela is provided below.

On April 19, 2013, Maduro was sworn in as the president of Venezuela. He promised in his statements that the period of his government’s rule would be a time of economic prosperity, justice and peace.

In October 2013, Maduro introduced a bill in the parliament giving him special powers to fight corruption. The document suggested the introduction of maximum penalties for those who, according to Maduro, declared “economic war” to Venezuela. According to him, those people were corrupt officials and those involved in sabotage of the national economy.

Inflation in Venezuela at that time was the highest in Latin America, about 50 percent, while there was a shortage of goods in trade networks, where prices were tightly restricted by the government.

The president and the government of the country blamed the opposition and businessmen for this, while the latter cited currency restrictions and barriers to foreign economic activity as the reasons.

In late November 2013, the Venezuelan Economic Affairs Ministry officially ordered the introduction of preventive control in the network of electronic goods seller Daka, whose products had previously been confiscated and sold by the authorities for overpricing.

In February 2014, marches of supporters and opponents of the country’s president took place in various cities of Venezuela. People were killed, injured and detained as a result of the riots. Maduro stated that the unrest was an attempt to overthrow the government.

On December 6, 2015, as a result of the parliamentary elections, the Venezuelan opposition gained control over the parliament for the first time in 17 years, securing two-thirds of seats. With a qualified majority (from 100 mandates), the opposition can organize a non-confidence vote in the vice-president and members of the government.

In the context of the worsening economic crisis that started after the fall in world oil prices and serious inflation of the Venezuelan bolivar on the black market, six new bank notes with a value ranging from 500 up to 20,000 bolivars were introduced starting from December 15, 2016. Hyperinflation was the reason behind this innovation.

The situation in Venezuela, the largest oil exporter in South America, has become critical amid a shortage of goods, galloping inflation and the fall in government revenues caused by the decline in oil prices, as well as an institutional crisis between the executive and legislative branches of the government.

In December 2016, the Venezuelan National Assembly recognized Maduro responsible for the crisis situation in the country.

In January 2017, the parliament declared that Maduro abandoned his post as a result of dereliction of duty. Maduro, in turn, accused the opposition parliament of a coup attempt. However, the Supreme Court of Justice stated that the National Assembly does not have the constitutional powers to remove Maduro from the presidency.

In April 2017, Maduro announced country’s withdrawal from the Organization of American States (OAS), which refused to recognize his new presidential powers.

In January 2019, the Venezuelan National Assembly cancelled Maduro’s decision to withdraw from the OAS.

In early January 2019, Venezuela’s parliament elected its new head, Juan Guaido, who announced his intention to create a transitional authority to restore constitutional order, as well as a fund for the return of assets that had been seized from the country’s population with the use of corrupt means.

Anti-government protest marches against Maduro that started in Venezuela on January 21, 2019, with demonstrators banging against their pots and pans, have already sparked unrest that has spread throughout the whole country and claimed the lives of more than a dozen people.