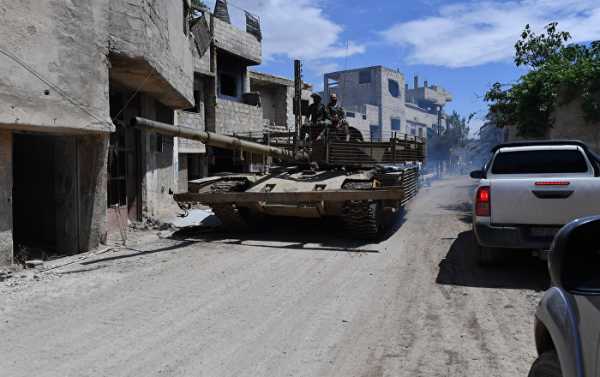 DAMASCUS (Sputnik) – The Syrian military is finishing the liberation of Muhayam al-Yarmouk district in Damascus from the militants of the Daesh terrorist group, the Russian Defense Ministry’s center for Syrian reconciliation said Tuesday.

“The Syrian military is finishing clearing Muhayam al-Yarmouk from the militants,” a representative of the center told reporters.

According to the Russian military, the Syrian troops have transported women, children and senior citizens away from Yarmouk Camp. The territory is being liberated with the help of aviation and tanks.

The Syrian troops, assisted by the reconciliation center, have already freed suburbs of Damascus belonging to the areas of Eastern Ghouta and Eastern Qalamoun as well as southern districts of the Syrian capital.

On Monday, the Syrian army confirmed that southern outskirts of Damascus had been fully liberated from terrorists.

“As a result of a joint operation of our armed forces and allies, Al Hajar Al Aswad and the surrounding territories have been completely liberated from terrorists,” the army said in a statement.

The Yarmouk camp was established in 1957 near Damascus to host Palestinian refugees. During the civil war the camp has become a stronghold of terrorists. In April, the Syrian army started an operation against terrorists in the camp.