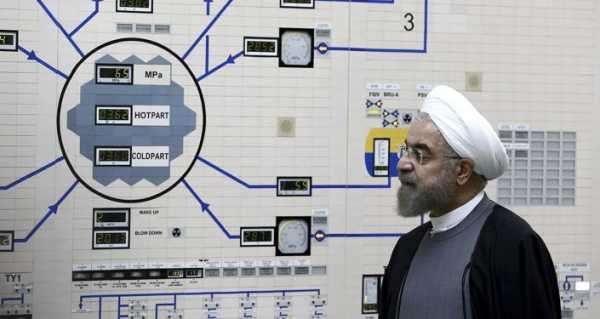 The standoff continues between Tehran and Washington about which side should be the first to make concessions in rejoining the nuclear deal. Iran says the US must drop sanctions against the Islamic Republic before it can rejoin the agreement. The US says ‘no deal’ unless Tehran reduces its uranium enrichment and stockpiling activity first.

Iranian President Hassan Rouhani has praised the development of Iran’s nuclear industry, telling his cabinet Wednesday that “today, both our economy and the centrifuges are spinning better”.

Calling the Joint Comprehensive Plan of Action nuclear deal “one of the most important political agreements” in Iran’s history, Rouhani stressed that its full implementation is simultaneously “very easy and very difficult.”

“If there is serious will on all sides, especially among Iran and the United States, work in this area can be completed this week,” the president suggested. Iran’s precondition for the immediate honouring of its commitments to the JCPOA remains the lifting of US sanctions, he reiterated.

Rouhani also urged France, Germany and the United Kingdom, the JCPOA’s European signatories, to take “practical action”, instead of limiting their efforts to “speeches and slogans”, and pointed out that it has been the Iranian side which saved the nuclear agreement, notwithstanding years of economic warfare against Tehran by Washington.

On Tuesday, Iran warned the International Atomic Energy Agency against US and European-led plans for a resolution by the watchdog’s board of governors attacking Iran over its reduced cooperation with the agency, with Tehran emphasising that the resolution would “have adverse effects on diplomatic processes”.

The planned resolution comes in the wake of Iran’s move last week to scale back the IAEA’s authority to carry out snap inspections at the country’s nuclear facilities, with Iran’s parliament giving the US until 21 February to lift crippling sanctions and return to the deal. Washington did not do so, and the new restrictions stepped into force on 23 February. The parliament set the deadline in December 2020 in response to the murder of a senior Iranian nuclear scientist. Tehran attributed the killing to Israel. Tel Aviv did not comment.

Washington unilaterally pulled out of the JCPOA in 2018, and reinstated crushing banking and energy sanctions against Iran. Tehran gave the agreement’s remaining signatories one year to create a mechanism to soften the blow of the restrictions, and when that failed, began gradually abrogating its commitments under the deal in 2019 by increasing its nuclear enrichment and stockpiling activities.

In January 2021, Iran’s nuclear agency announced that the country’s nuclear enrichment had reached a level of 20 percent, far above the 3.67 percent limit outlined in the JCPOA. Last month, Iranian Supreme Leader Ali Khamenei said the country could continue to enrich uranium to levels of up to 60 percent if necessary. By current standards, nuclear weapons-grade uranium is considered to be that which has been enriched to a level of 90 percent. The US nuclear bomb dropped on Hiroshima in 1945 had a uranium enrichment level of about 80 percent.

Despite its enrichment activities, Tehran maintains that it has no intention of pursuing nuclear weapons, with officials regularly pointing to a Khamenei fatwa (religious ruling) prohibiting the development of such weapons. Khamenei’s predecessor, Ayatollah Ruhollah Khomenei, issued a similar fatwa in the 1980s, outlawing all weapons of mass destruction. The decision eventually prompted Iran to destroy its stockpiles of chemical weapons.