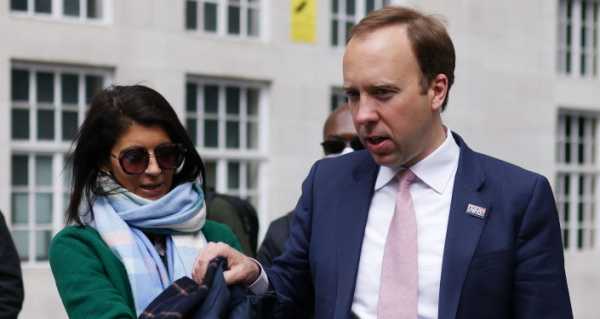 The former UK health secretary and his aide were caught kissing on security footage last week, breaking not only their marital vows but also pandemic regulations. The scandal caused a real hullabaloo in British politics and forced Hancock to step down.

A probe into the mysterious leaker responsible for the bomshell CCTV footage showing Britain’s ex-Health Secretary Matt Hancock locking lips with a married aide will take “10 minutes”, due to a massive digital trail left behind, The Times has reported, citing security experts.

According to the report, all of the staff members who had access to the CCTV are now being interviewed about the infamous clip that was leaked to The Sun.

Britain’s Health Secretary Matt Hancock smiles during a television interview as his aide Gina Coladangelo looks on, outside BBC’s Broadcasting House in London

At the same time, some reports suggested the camera that captured the cheating couple may have been moved 180 degrees towards the door, raising concerns in the government about security in office spaces.

The video, published last week, showed Hancock kissing his aide Gina Coladangelo at the office. The footage caused a major outrage, as both of them are married – but even more so, Britons were angered by the minister having desregarded the coronavirus guidelines he himself had devised.

As a result, Hancock announced his resignation from the office, while he and Coladangelo have reportedly moved in together, saying that the affair was serious.