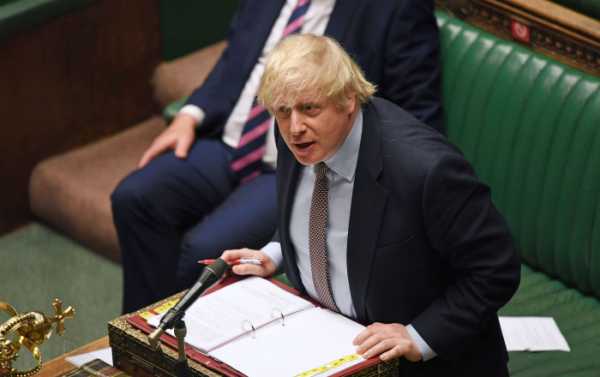 As the United Kingdom leaves the European Union, it is looking to pursue trade agreements independently of the bloc. Prime Minister Boris Johnson, despite previously lauding positive relations with China, is facing growing demands to look elsewhere for trading opportunities.

Boris Johnson has found himself facing a delicate balancing act as leading Brexit-supporters demand that his government prioritise trade relations with Asian “democracies” as opposed to China and the European Union.

The Foundation for Independence, a think-tank that advocated for the UK withdrawal from the EU, argues in a report seen by iNews on Sunday that the Prime Minister should not focus on trade negotiations with a “stagnant” EU.

The foundation – which was set up by John Longworth and John Mills – businessmen and leaders in the Vote Leave campaign –  is urging the government to focus on establishing trade arrangements with other Asian economies.

Mills calls for the creation of a “special relationship” with India with a series of new measures such as encouraging Indian students to attend British Universities.

In the outline for a “free and open Indo-Pacific strategy”, they support pursuing trade agreements where existing ties are currently “underdeveloped” with Japan, Singapore, South Korea, and Taiwan. He also stresses strengthening trading ties with Commonwealth nations such as Canada, Australia, and New Zealand.

The purpose of the Foundation is to lobby the government to keep its promises about Britain’s future outside of the EU amid ongoing trade negotiations with the bloc.

The UK has formally left the EU and is poised to end a transition period on 31 December 2020.

Attacks from Both Sides

Johnson has previously expressed enthusiasm for closer ties with China and, to the dismay of many Conservative colleagues, permitted Chinese tech giant Huawei access to the UK’s new 5G infrastructure – a move opposed by the British intelligence services.

Raab also claimed that the UK cannot go back to “business as usual” with China following the coronavirus pandemic.

This split within the Conservative leadership comes amid the backdrop of increasing pressure from the United States, which is currently embroiled in a trade war with China.

US President Donald Trump – a close ally of Johnson – was reportedly “apoplectic” with the Prime Minister after his decision to include Huawei in 5G and had previously threatened former British Prime Minister Theresa May that there would be no US-UK trade deal if the Chinese company gained access to UK infrastructure.

Currently, the United States has maintained its take-it-or-leave-it approach to trade negotiations with China. Consistent with its attempts to check Chinese economic leverage, the proposed trade deal with the UK precludes the establishment of separate agreements with “non-market economies”.

China is the world’s largest market and fastest-growing economy and a UK trade deal could see the country establish an agreement on its own terms without consideration for EU partners.

Beijing has maintained that accusations by the Trump administration that they are “cheating” on trade and are using telecommunications involvement as a means to spy are merely part of attempts to stop China challenging the US as the world’s top economic power.

The Chinese Ambassador to the UK said that despite the impact of coronavirus, China’s economic recovery will provide opportunity for greater business cooperation between the two countries.

A move away from China would mark a considerable shift from the policy of former Brexit secretary, David Davis, who said in 2016 that trade deals with the US and China alone would provide a trade area “almost twice the size of the EU”.

But as geopolitical reality begins to clash with the desires of Brexit advocates, Boris Johnson is increasingly being forced to decide which camp the UK wants to belong to.