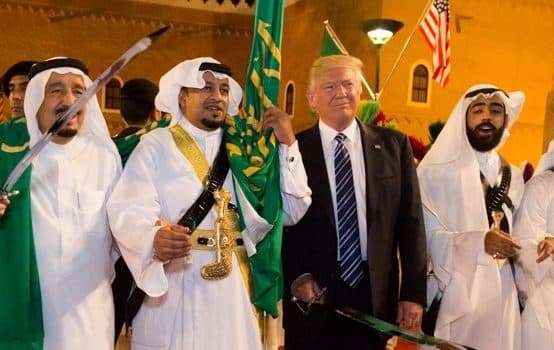 In the long arc of history, while regimes come and go, civilizations endure. Bet on the former against the latter, and you’re taking one helluva gamble. The House of Saud is a regime, a dynastic enterprise masquerading as a nation-state. Iran, by contrast, is the modern incarnation of an ancient civilization. The antagonism between the two is deep-seated, genuine, and destined to persist.

How the United States found itself aligned with the former against the latter is a story fraught with miscalculation, folly, and hubris. Taken as a whole, it’s our version of Lawrence of Arabia, albeit without a charismatic protagonist on which to hang the tale. Our own equivalent of T. E. Lawrence would be an in-over-his-head mischief-maker like Graham Greene’s fictional Alden Pyle, albeit relocated from Indochina to the Persian Gulf. Imagine a composite figure combining the signature traits of Kermit Roosevelt, Oliver North, and Max Boot, and you have the makings of an epic of sorts, even if shorn of the wide-angle grandeur that was a hallmark of David Lean’s film.

Saudi Arabia qualifies as an American friend and ally in precisely the same sense as does the state of Israel. In both countries, cold calculation rather than warm regard governs attitudes toward the United States. Each faces a list of national security challenges longer than it can comfortably handle on its own. Over several decades, in hopes of mitigating those challenges, each has worked assiduously to cultivate a close relationship with Washington. 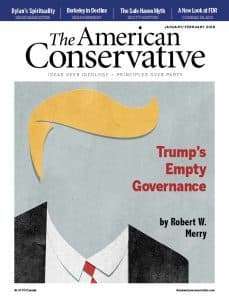 This article appears in the January/February 2018 issue of TAC.

There are differences, of course. We provide weapons to the Israelis gratis, with no expectation of repayment, American generosity testifying to an enduring (if partly manufactured) U.S. commitment to preserving the Jewish state. By contrast we sell weapons to the Saudis, who pay cash, their free-spending habits further binding the United States to the Saudi monarchy, which presidents of both parties have vowed to protect. Our obligation to support Israel is ostensibly moral, a religious and historical mandate. Our obligation to defend Saudi Arabia is somewhat less exalted, impossible to detach from questions of oil and the marketing of military hardware.

Of course, there is a further justification offered for the U.S.-Israeli relationship: that the two peoples share a common outlook and set of values. According to this view, Americans and Israelis are part of a larger entity called the West. Thus we and they share a commitment to individual freedom, liberal democratic principles, human rights, and the rule of law. When using such phrases Americans and Israelis mean the same things. We are therefore like one another, as propagandists for U.S.-Israeli “friendship” unceasingly reiterate.

No such claims can be made regarding the U.S.-Saudi relationship. We and they are not alike. Saudi Arabia is not part of the West, by even the most expansive definition of that term. While the Israeli commitment to individual freedom, human rights, and liberal democratic principles is imperfect and selective, the Saudi commitment to those values is nonexistent. Indeed, for decades the Saudi government has demonstrated an acute aversion to the values that the United States and others in the West profess to represent. In global rankings of illiberal and undemocratic regimes, Saudi Arabia ranks right near the top.

Worse, wealth generated by the sale of Saudi oil ends up in the hands of anti-Western terrorists. That Saudi money underwrites violent radical Islamism is widely acknowledged, even if the active complicity of Saudi officials may remain a matter of dispute. And, of course, 15 of the 19 9/11 hijackers were Saudis, as was Osama bin Laden—facts known to all yet inexplicably categorized as incidental or merely curious.

Therefore it seems passing strange—no, make that positively bizarre—that the United States, during the “America First” presidency of Donald Trump, should side with Saudi Arabia against Iran in what is a Muslim version of the “Great Game,” pitting Arab against Persian and Sunni against Shia. In the eyes of the two main adversaries, the stakes in this Great Game are monumental. Control of the Persian Gulf could be up for grabs, perhaps even the very future of Islam itself.

The arguments for the United States picking sides in this dispute are weak. If anything, doing so is likely to compound the long string of misjudgments characterizing U.S. policy in this part of the world since the end of the Cold War.

Ever since Saddam Hussein foolishly invaded Kuwait in 1990, the United States has sought to make itself the arbiter of events in and around the Persian Gulf by relying on our putatively superior military might. Under the guise of waging war against terrorism and/or advancing the cause of freedom, we have flooded large parts of the Islamic world with troops, established or leased dozens of bases, recruited all manner of (mostly incompetent) proxies, and expended vast quantities of ordnance from West Africa to the Southern Philippines.

The results, now extending over more than a quarter-century, are unambiguous. We have sown chaos and, in doing so, helped spread the virus of violent jihadism that we are supposedly attempting to contain. We’ve killed many thousands of Afghans, Iraqis, and other militants of various nationalities (not to mention plenty of noncombatants) and lost more than a few of our own troops, all to no avail. The money already expended would have sufficed to rebuild just about every bridge in the continental United States.

On the home front, this penchant for waging wars that never end contributed to the election of Donald Trump, who as a presidential candidate had the temerity to denounce recent U.S. military efforts as foolhardy. Not yet a year in office, of course, Trump has long since turned to matters more pressing than the wars he inherited, with responsibility for the actual direction of those wars passing into the hands of senior military officers seemingly untroubled by their perpetuation.

This odd civil-military bargain—a commander-in-chief with a limited attention span deferring to generals devoid of imagination—has worked in favor of Saudi Arabia. Employing a combination of glitter and showmanship, along with promises of yet more arms purchases, Saudi leaders wasted no time in ingratiating themselves with an American president ignorant of statecraft but highly susceptible to flattery. As Aaron David Miller and Richard Sokolsky have written in Foreign Policy, King Salman bin Abdulaziz Al Saud, at age 81 a fading presence, and Crown Prince Mohammad bin Salman, at 32 impetuous and inordinately self-confident, have “set a new land speed record in convincing the Trump administration that they hold the keys to war, peace, and the transformation of the region.”

Accurately gauging what has occurred as a consequence of Riyadh’s courtship of the new team in Washington requires appropriating a term from beyond the realm of diplomacy. That term is seduction, albeit without any suggestion from Trump or his advisers that relations are anything other than fully consensual.

The Crown Prince, known as MBS, is a young man in a hurry. Under the guise of fighting corruption and liberalizing Saudi society, he is consolidating his position as de facto supreme leader. Claiming to oppose an Iranian bid for regional hegemony, he appears intent on elevating Saudi Arabia to the status of regional hegemon, while enlisting the United States as helpmate in that cause.

In Yemen, Qatar, Lebanon, and elsewhere, the preliminary results are on ample display: Saudi diplomatic and military muscle deployed crudely and without evident success. Based on the available evidence, MBS is no Bismarck; he may yet prove to be an Arab equivalent of Kaiser Wilhelm II, whose chief accomplishment was to destroy the throne he inherited.

Even so, Trump and his unabashedly Iranophobic generals have allowed the United States to become a patsy for Saudi Arabia, actively abetting or tacitly endorsing MBS’s ambitions. Yet whatever the administration’s purported intent, throwing in with the Crown Prince will only exacerbate the disorder that previous U.S. administrations have done so much to create.

Down that path lies the risk of allowing the United States to be drawn into yet another needless war, this time with Iran. Lost along the way, meanwhile, is any appreciation of actual U.S. interests in the Persian Gulf, which can be summarized in a single word: stability.

The purpose of U.S. policy in the region should be to reduce the incidence of violence and unrest, restore order, and thereby repair the damage to which the United States itself has so mightily contributed in recent years. As for the geopolitical competition between Saudi Arabia and Iran, as an American secretary of state once remarked in a different context, we don’t have a dog in that fight. Much the same can be said regarding the ancient dispute between Sunni and Shia Muslims, which predates the Protestant Reformation by several centuries.

It must be said of course that if Saudi Arabia is no friend of the United States, neither is Iran. The enmity between our country and the Islamic Republic is real and deep-seated. Empathy and trust are all but nonexistent. Anyone looking to explain this mutual antipathy will find plenty of blame to go around.

Yet restoring even a modicum of equanimity to the Persian Gulf will be impossible if the United States consigns Iran to the status of permanent pariah. That seems to be precisely what Trump wanted to do when he reversed a tentative opening initiated by his predecessor.

For the Trump administration to join an anti-Iran cabal may find favor with MBS, not to mention the current government of Israel. Doing so will no doubt please the U.S. military-industrial complex. But it will not serve the long-term interests of the United States.

The diplomatic challenge facing the United States is to cajole Iran into moderating its behavior, which implies a willingness to engage with those elements in Iranian society eager to embrace modernity. No doubt any effort aimed at converting Iran into a status power will require patience and subtlety. Yet the place to begin is with the realization that we have no “friends” in the Greater Middle East. None. We have only interests, which await rediscovery.