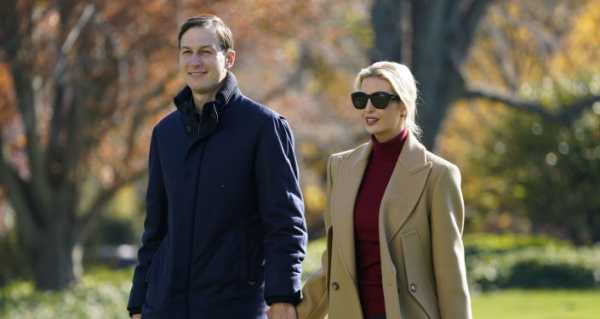 Former First daughter Ivanka Trump and her husband, ex- senior administration advisor Jared Kushner, have spent the last four years in the West Wing of the White House, with their post-Trump presidency future open to a plethora of speculations.

Jared Kushner and Ivanka Trump are reportedly planning a vacation to catch up on some down time after the turmoil of the last few months in the wake of the November 2020 presidential election.

Donald Trump lost the presidency to his Democratic rival, despite claims the election had been ‘rigged’ and ‘stolen’ from him, with the Capitol riots on 6 January as Congress met to certify Joe Biden’s win adding further anguish to his final days in office.

Accused of having whipped up his supporters through tweets and rallies to indulge in the violence that resulted in five people dead, the House of Representatives voted to impeach Trump a second time, while state attorneys general discuss postpresidency investigations into the family’s business and campaign practices.

As Donald Trump and former FLOTUS Melania Trump jetted off to Florida on Wednesday, skipping the traditional attendance of the swearing-in ceremony of the 46th President of the United States, Democrat Joe Biden and his vice-president, Kamala Harris, the power couple of ex-White House advisors, are eyeing a break.

Earlier, they moved out of their Washington, DC, home, and reportedly signed a one-year lease on a luxury condo in Miami, according to a source cited by CNN.

With a holiday in the cards, Ivanka Trump and Jared Kushner had been suggested earlier as mulling going to the Yellowstone Club, a private residential 2,200 acre ski club in Big Sky, Montana.

​The place boasts a star-studded list of members, such as Bill Gates, Eric Schmidt, and Justin Timberlake. The destination has the added advantage of being home to Joshua Kushner, Jared Kushner’s brother.

​The couple’s friend Ron Burkle, a billionaire investor who co-owns the Pittsburgh Penguins and Soho House, as well as several significant properties, also resides there.

Burkle was the one to offer his Montana property to the couple, according to four sources cited by the outlet.

However, Yellowstone Club’s safety protocols, installed due to the coronavirus pandemic, oblige the retreat to limit the number of guests allowed to stay.

Ron Burkle was also reported as having suggested several of his other properties as potential vacation destinations, yet the couple declined, and narrowed down the options to settle on Florida.

The two former White House advisors were reported to have rented an unfurnished apartment in an oceanfront building in Miami’s Surfside neighbourhood for at least the next year, as they wait for construction work to be completed on a property they acquired from famed Spanish singer Julio Iglesias.

The couple signed off on the $32.2 million deal on Indian Creek, a luxury island community in Miami-Dade County, Florida, in December 2020.

​In a week of symbolic last gestures, the 39-year-old former First Daughter and her husband on 19 January brought their three children to the Oval Office for a private goodbye to their grandfather as president.

Later, a group photo was taken together with all the assistants to the former POTUS.

​On Wednesday, the Trump-Kushner’s waved the outgoing president Donald Trump off as together with the ex-FLOTUS he embarked Air Force One to head for Mar-a-Lago, his Palm Beach resort where he intends to spend his post-presidency.

Prior to that, the young couple attended Trump’s farewell speech at Joint Base Andrews.

​Some speculate there might be more of an agenda behind the Florida move, suggesting the Sunshine State could witness Ivanka Trump set up a base for a political future in her own right.

According to Lopez, he would not rule out the contentious possibility of Ivanka Trump’s 2022 primary run against sitting Florida senator Marco Rubio, whom her father beat to win the Republican presidential nomination in 2016.