4:03 Exclusive: Pierre-Emerick Aubameyang tells Sky Sports about Arsenal’s development under Unai Emery and his future at the club

It is, perhaps, because he is seen as a pure goalscorer rather than an all-rounder. Aubameyang is prolific, his pace electrifying, but there are plenty who would argue that he brings little else to the table. Many Arsenal fans – until recently, at least – would opt for Alexandre Lacazette if they could only keep one of the two.

Klopp, though, insisted there are “no real weaknesses” in Aubameyang’s game earlier this season and the statistics highlight a creative streak to complement his finishing ability. Since January 2018 in the Premier League, Aubameyang has created more chances than Harry Kane. He has registered nearly twice as many assists as Sadio Mane.

There is a certain single-mindedness to many of the most prolific goalscorers. Cristiano Ronaldo’s obsession is such that he goes home angry when he doesn’t score. Kane has been known to claim goals off his own team-mates. Only last month, tensions boiled over at Liverpool after Salah refused to pass to Mane during their 3-0 win over Burnley. But Aubameyang is different. Despite a scoring record which places him among the very best, he is a fundamentally unselfish player.

He was praised for his decision to hand Arsenal’s penalty to Nicolas Pepe against Villa last weekend, allowing the £72m summer signing to score his first goal for the club, and it was not the first time he has prioritised a team-mate’s confidence over his own personal ambition.

In March 2018, and despite being on a hat-trick having scored once from the spot already, he handed a late penalty to Lacazette during a 3-0 win over Stoke at the Emirates Stadium. “I think strikers who are generous are a rarity,” said Wenger afterwards. “When you see it, you are very happy because you know it will make the team much better.” 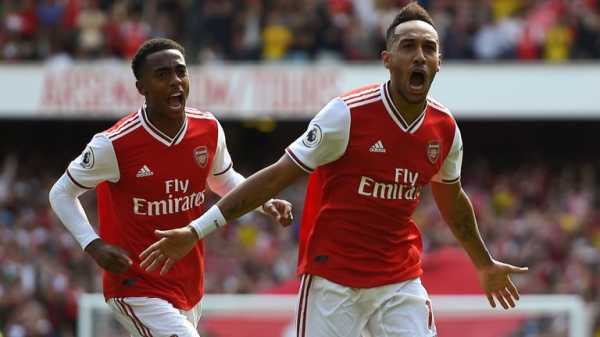 Lacazette had only scored once in his previous 13 games, but sure enough, with his confidence enhanced by his team-mate’s generosity, he went on to fire seven goals in his final nine appearances of the season. The hope for Arsenal is that Pepe will profit from Aubameyang’s selflessness in the same way. “That decision shows a really great player,” said Emery on Sunday.

It is part of the reason why he is so popular among his team-mates. Aubameyang was seen as a rival to Lacazette when he arrived at Arsenal. Instead, they have become close friends. He is a mentor to the club’s young players and his willingness to place the interests of the group above his own can also be seen in how he has embraced different roles on the pitch without complaint.

It is down to Arsenal, then, to ensure they capitalise on his presence while they can. Aubameyang is at the peak of his powers, but he turned 30 in June and he is yet to extend his contract beyond 2021. Arsenal will hope he commits his future to the club and that the best is yet to come. They already know they would be far worse off without him.