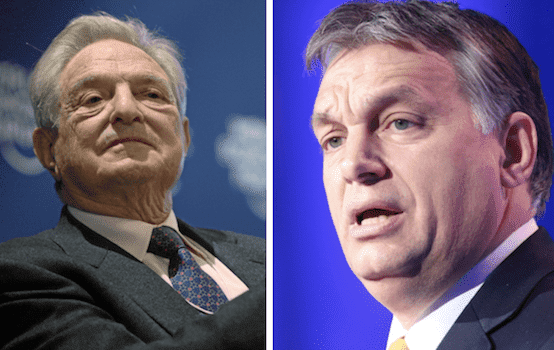 The victory of Victor Orbán and his party Fidesz in the Hungarian elections last month elicited the predictable flurry of laments over the rise of illiberalism.

Such coverage has tended to emphasize the Orbán government’s animosity towards the Hungarian-American financier George Soros, a prolific contributor to progressive causes in Hungary and around the world. Soros is best known for his Open Society Foundation to which he donated $18 billion last year, his association with the Clintons, and as the financial speculator “who broke the Bank of England” in 1992. But he’s also come to be regarded as a leader of the liberal democratic resistance and a “victim” of illiberal tendencies in Hungary.

Orbán’s legal and political moves against the Open Society Foundation and ongoing rhetoric against Soros himself certainly play into the dominant narrative of one-sided victimization. Soros’s own statements have contributed, too—for instance his claim that Orbán’s government is “an anti-democratic…mafia regime” more oppressive than the Soviet occupation. But such an unbalanced narrative fails to uncover what the Orbán-Soros conflict is really about, and with its narrow perspective is not much more insightful than the anti-Soros howls of the enraged right.

A more realistic analysis makes three things clear. First, the situation in Hungary is best understood not as one-sided hostility, but, to use Soros’s own words, “an unbridgeable conflict of principles.” Orbán and Soros stand for two essentially different visions of Hungary, and their conflict is about fundamental political questions: the nature of the Hungarian nation and the role of the Hungarian state in it. This is a fight between nationalists and anti-nationalists—those who view the nation as sovereign in Hungary and cherish its right to self-determination, and those who urge a move beyond sovereign states organized along lines of national identity. The standard narrative fails to do justice to this dynamic.

Second, most Hungarians support nationalist ideals and values, which have deep roots in Hungarian history and intellectual tradition. Their backing demonstrates the continuing vitality of the ideas that three decades ago led European nations to liberate themselves from Soviet domination and establish democratic governments, including the contention, under pressure today, that nationalism and democracy can go hand in hand.

Third, Soros has support for his vision at the highest levels of the EU. This helps clarify the consistent popularity of nationalist politicians in Hungary: Hungarian nationalism occupies a defensive position, which no doubt consolidates its support.

Orbán is far from perfect. His rhetoric is often over the top, certain policies regarding the media and courts are questionable, and his corruption is alarming. Wariness is appropriate when he points to “Singapore, China, India, Turkey, Russia” as potential models for a new “illiberal state”—even if he promises to uphold the values of “Christianity, freedom, and human rights” while strengthening Hungary’s national community to be more than “a simple sum of individuals.”

And yet whatever the flaws of Orbán and Fidesz, we should not fall for easy narratives that blind us to what is essential about the conflict in Hungary and the fundamentally different ideals on offer.

Soros’s anti-nationalism is clear from his public statements, most recently last January at the World Economic Forum in Davos where he spoke about reversing nationalism. During the 2015 migrant crisis, he wrote that he sees “national borders as the obstacle” and “the protection of refugees as the objective,” whereas Orbán’s stance is the opposite and thereby undermines European values. Soros’s attitude towards national sovereignty and borders goes far back: in 1998 he called for the creation of “a new international authority that transcends the sovereignty of states to promote an open society.”

These ideas are integral to Soros’s vision of an “Open Society” and drive his contributions to NGOs (over the years totaling $400 million in Hungary). His vision, however, runs counter to the nationalist ideals Orbán has supported and defended. The Constitution of Hungary, passed under Fidesz in 2011, makes them clear. The preamble—the “National Avowal”—connects modern Hungary to the past, its forebears, its Christian faith, and its historical constitution. It proclaims the constitutional continuity of the Hungarian state and ties its fortunes to the history of the Hungarian nation, while also affirming it as a democracy.

In short, the Preamble expresses the idea that Hungary is a homeland for all Hungarians, a state that is founded by and for the Hungarian nation. This, in fact, is the way nationhood is commonly thought about in Central and Eastern Europe. And as I have argued with regard to Lithuania and elsewhere, the type of nationalism that calls for sovereignty (not superiority) and self-determination in a nation’s ancestral lands was a key force for liberation from Soviet domination.

This is why Orbán-backed nationalist ideals are so popular in Hungary. It is true that the constitution was passed only seven years ago along party lines and with some controversy. But it is also important to note that, unlike other Eastern European countries, Hungary did not adopt a new constitution after independence; instead it merely modified its old socialist one as a temporary measure. A new governing charter was long overdue.

The ideas expressed in the constitution certainly do not lack popular support. At the time the Constitution was passed, Orbán’s government represented 53 percent of the electorate. And support for nationalist ideas more broadly was even greater, as the additional 17 percent vote share of the staunchly nationalist opposition party Jobbik shows. After the Constitution’s adoption, nationalist parties received 65 percent of the vote in the 2014 elections, and last month their support increased to 68 percent, as Fidesz received just under 50 percent (with the highest turnout since 2002). Nationalist parties and ideas are backed by the major part of active citizenry, and their support has been remarkably consistent over time.

This nationalism manifested itself almost immediately upon independence. The first post-Soviet elections in 1990 were won by the Hungarian Democratic Forum (MDF), a nationalist-conservative party with populist elements formed out of a Hungarian intellectual tradition emphasizing national values and traditions, Christianity, and a “third way” between capitalism and communism. The coalition government included two other like-minded parties with roots in the pre-World War II era, the populist-agrarian Independent Smallholders’ Party (winner of the previous free elections in 1945) and the Catholic Christian Democratic People’s party (now a satellite party of Orbán’s Fidesz). The urban liberal Alliance of Free Democrats and the Hungarian Socialist Party stood in opposition. After the government’s defeat in the 1994 elections, Orbán’s Fidesz, until then a small liberal-centrist party, took up more conservative and nationalist positions and saw its popularity grow until it emerged as the winner in 1998. We can draw a direct line from the ideals nationalists espouse today to the early 1990s and further back to the pre-World War II era.

All of this underscores what is well-documented: the importance of national identity in Central and Eastern Europe and its connection to culture and ethnicity. For instance, Pew Research Center data shows that 94 percent of Hungarians think customs and traditions are important for being truly Hungarian (68 percent deem them very important), while 81 percent of Hungarians affirm the importance of being born in Hungary (52 percent say it is very important). By comparison, the corresponding figures in Sweden are 66 percent and 26 percent for customs and traditions, and only 20 percent and 8 percent for birthplace.

There can thus be little doubt about the desire to preserve Hungary as a Hungarian homeland—and yet the nationalists are still on defense. The Open Society Foundation has close ties to the European Union, and EU leaders regularly express their opposition to nationalism. Jean-Claude Juncker, the president of the European Commission, has said borders are the “worst invention ever made by politicians” and called on Europeans “to fight against nationalism,” while leading EU legislator Guy Verhofstadt has called nationalism “cancer” and declared it culpable for the atrocities of the last two centuries. The staunchly pro-EU French president Emmanuel Macron has spoken of the “abyss, nationalism, giving up of freedom.”

It wasn’t surprising, then, that in 2015, the EU approved a plan to relocate migrants across Europe, eventually proposing penalties on nations for each migrant they refused. Hungary, together with other Central and Eastern European countries, resisted, but the EU overruled their objections by jettisoning the unanimity requirement, its normal decision procedure for settling questions of national sovereignty, in favor of a majority vote.

Hungary has kept up its opposition to the decision, and eventually joined Slovakia to challenge it at the European Court of Justice. The position of the Orbán government on the issue has been hugely popular in Hungary: almost 70 percent of Hungarians expressed opposition to the EU plan, and in a referendum on the question 98 percent voted against it (the turnout was 44 percent, only slightly lower than in the EU membership referendum of 2003, and more people opposed the migrant quotas than had supported joining the EU).

In this context, given the attitudes and actions of EU elites, it is not surprising that Hungarians vote for politicians who promise to fight for national sovereignty and identity. It is also not surprising that anything perceived as foreign influence—whether of EU politicians or a New York-based billionaire—is met with hostility. The fact is that Orbán stands for ideas many Hungarians deem to be of utmost importance, and as long as he does, support for him will persist.

Many Hungarians clearly perceive their way of life and their country as under threat and sense that influential individuals would like them fundamentally transformed. Given this, it is worth thinking about how these concerns can be best expressed and how a nation’s sovereignty and identity can be maintained without falling for something darker. But such a reflection would require recognizing nationalist aspirations as legitimate—perhaps a step too far for most of Orbán’s critics.

Skomantas Pocius is a Ph.D. candidate in the Committee on Social Thought at the University of Chicago with an interest in nationalism. He has previously been published in The American Conservative and The Daily Signal. He was born in Lithuania, grew up in Finland, and lived in the UK before moving to the U.S.

US Smuggles Three Dozen Oil Tankers Out of Syria by Dead of Night, Report Claims