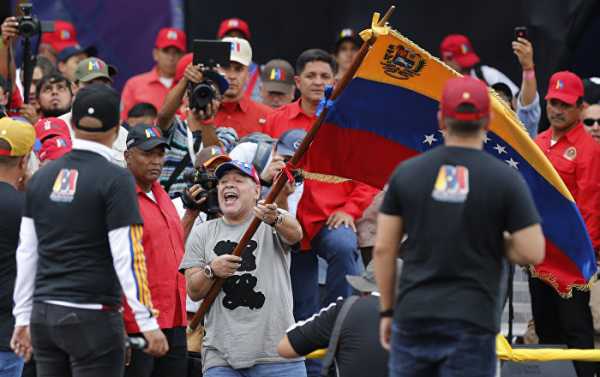 The now-retired Argentine icon made the statement after Venezuelan President Maduro accused the Venezuelan right-wing opposition and some foreign powers of what he called an “assassination attempt.”

On Saturday night, an explosion struck Caracas near a military event where Venezuela’s President was giving a speech. Maduro rushed to accuse his “ultra-right wing” opponents in Venezuela, in alliance with Colombian government and financiers in Florida. A clandestine group called the Flannel Soldiers has claimed responsibility for the failed attack, allegedly carried out by drones stuffed with C-4. However, there have been suggestions that it was a gas tank that exploded in a residential building close to the presidential event.

Maradona, who currently chairs the Belarusian football club Dinamo Brest, is a vocal supporter of Nicolas Maduro. In August 2017, the 57-year-old said he was ready to fight for “a free Venezuela” and called himself a “soldier” for Maduro. The remark came amid a constitutional crisis in the country, which saw large-scale opposition-led demonstrations protest against Maduro, claiming that he wanted to sidestep the parliament.