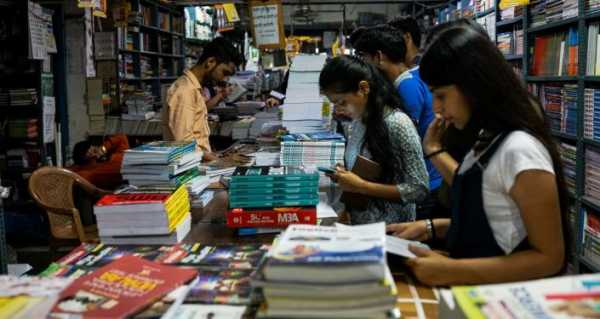 From renaming places to editing school history textbooks, the governing Bharatiya Janata Party has been trying to blot out India’s Muslim Mughal past since 2014. Muslim rulers of the Mughal dynasty had a rich cultural impact on the country as they ruled the Indian subcontinent from the middle of the 1500s to the beginning of the 1700s.

A lower court in Jaipur, capital city of the state of Rajasthan, has issued notice to the Federal Ministry of Education and Sridhar Srivastava, the Director of the National Council for Educational Research and Training (NCERT) – the autonomous organisation which publishes various school textbooks – because of the “glorification of Mughal Emperors” in a history textbook for Year 12 (for children between the age of 16 and 18).

The petition has sought to ban the controversial part of the history book from being printed. Admitting the complaint, the court has ordered officials of the federal education ministry and NCERT to present their reply by 19 April.

The plaintiff, P C Bhandari, said that the Year 12 history book “Themes in Indian History” states that Shah Jahan and Aurangzeb paid grants to repair temples that were demolished during the wars.

Bhandari wishes to know under the Right to Information Act (RTI) where the history book is getting its information from.

The RTI Act was passed in India in 2005. Since then, thousands of applications under it have been filed by people all over the country to obtain information not readily available from government agencies. The responses received from the government on RTI queries have led to thousands of petitions filed in courts.

The head of the Department of Public Information replied to the RTI query that they had no proof to substantiate the printed matter. After this, Bhandari filed a petition in the court seeking removal of the facts glorifying Mughal emperors.

In January, law student Shivank Verma, in an RTI query, also wanted to know from NCERT on what evidence it was being taught that the invading Mughal rulers provided grants to temples.

But NCERT could not substantiate the fact in its books. NCERT’s further claim that “no such information is available on the files” has begun a storm on Twitter with #NCERT_Fakes_History trending for hours.

“I believe that a new curriculum should be designed and new textbooks rewritten keeping in mind the fact that they are accountable to people and their scrutiny. So, they must not divulge in the books their versions of history but pure facts, “ Verma told Sputnik.

However, Saiyid Zaheer Husain Jafri, a Professor at the Department of History at Delhi University, told Sputnik that there is enough evidence to substantiate the fact of grants given for temples.

“There are hundreds of surviving documents, published and cited which show that Mughal emperors gave grants and funds for maintenance, preservation and upkeep of temples.

“It is a well-established fact in history. NCERT books are for students up to Year 12 and do not give citations or footnotes.”

Speaking about the controversy around the issue, Professor Jafri said that the line taken by political parties is that Mughal rule was a Muslim rule and the rulers were anti-Hindu.

“Anything that goes against this narrative is not acceptable to them but this is not a simple issue – it is complex. Those using social handles are mostly the urban elite and sadly not very well informed,” the professor added.